It was giveaway night at park 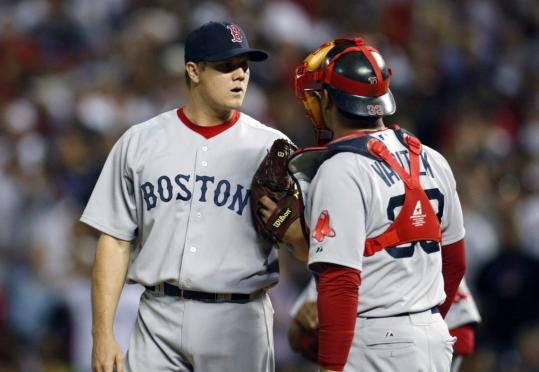 Jonathan Papelbon talks to Jason Varitek after giving up a tying HR in the ninth. It got worse. (Rick Wilking/Reuters)
By Nick Cafardo Globe Staff / June 24, 2010

DENVER — All you could possibly say after this one was “You’ve got to be kidding me!’’

The Red Sox had a one-run lead entering the ninth inning last night, had solved the best pitcher in the game, Ubaldo Jimenez, and then this? Jonathan Papelbon gives up a homer to Ian Stewart to tie it and then a two-run shot to Jason Giambi to give the Rockies an 8-6 walkoff win?

“It was a playoff atmosphere,’’ Giambi said. “I told these guys in this clubhouse, this is a great team we’re facing. They’re going to come in with superstars like Big Papi, that pitching staff, and it’s going to be tough. That’s like an All-Star team. To beat those guys, that’s incredible for us. Incredible for our team.’’

It really was a wild game. The Sox got the upper hand on Mr. Incredible himself, Jimenez.

But in the end things did not go so well for Papelbon, who dropped his head in disgust for several minutes in the clubhouse afterward, and the Sox.

When you have a chance to beat the best you just can’t give it away. You have to take advantage of the moments when guys like Darnell McDonald (two-run homer) and Daniel Nava, two doubles and three RBIs, overtake a pitcher who can throw 100 miles per hour and who had dominated the Red Sox for most of his 5 2/3 innings. You have to take advantage of the fact that your starter, John Lackey, didn’t have it early but got you into the seventh with the lead — maybe not totally outpitching but, yes, outhitting Jimenez.

As tough as the 2-1 loss was on Tuesday night, this one was horrendous.

“We’ve seen Giambi do that before,’’ said Sox manager Terry Francona. It was actually Giambi’s first walkoff home run against the Red Sox, but the fifth of his career. Yet while lamenting one of the toughest losses of the year, Francona said, “I love a lot of things we did.’’

For one, Lackey, who had two hits, including a double, never had swung the bat like this.

Not when you come into a game 1 for 31. That’s .032, folks. Yet he managed to stroke two hits against Ubaldo Jimenez. You may have heard of him? He was the talk of the National League, of baseball, with his 13-1 start.

When Lackey came out of the game with two outs in the seventh, he’d allowed 10 hits and five runs. But that didn’t really tell the whole story. Fact is he retired 10 of the last 11 batters he faced. He should have won his ninth game, which isn’t too shabby, even though his ERA is 4.69.

It’s no secret that coming into this game, even though Lackey had given the team nine quality starts, most felt he hadn’t pitched like everyone thought he could. After all, the Sox gave him a five-year deal worth $82.5 million. Lackey was once a No. 1 starter for the Angels, but he hadn’t pitched that way for the Red Sox, even though the win numbers weren’t bad.

If durability counts for anything, he along with Clay Buchholz and Jon Lester had made every start. While they haven’t all been pretty, at the end of the game you see Lackey around in the seventh. How can you not like that?

His teammates certainly appreciate the fact he battles even when he doesn’t have his best stuff. That’s a sign of toughness, and fielders like to know they have tough pitchers they’re playing behind. Lackey did not walk a batter and struck out seven. He came oh so close to joining Clayton Kershaw as the only pitcher to have defeated Jimenez this season.

“It seems like when he pitches you look up and you’re in the seventh inning and you have a chance to win the game,’’ Francona said.

Lackey has probably now witnessed two of Papelbon’s worst meltdowns — the playoffs last season against Anaheim and last night. Yet Lackey came over to a distraught Papelbon and gave him a big hug.

“There’s nobody else I’d rather have close a game for me,’’ Lackey said.

“I probably felt as good as I’ve felt all year,’’ he added. “I wasn’t happy about a couple of pitches I made early, but after that I settled in and pitched a lot better.’’

As for his hitting, Lackey couldn’t get down a bunt to save his life in the third against Jimenez and wound up striking out when he missed three attempts. It got better. In the fifth he sent a hard ground ball up the middle. Clint Barmes has really good range at short and managed to catch up to it and knock it down. But Lackey doesn’t run too badly for a big guy (hate to say it, but he runs better than Mike Lowell does now) and reached as Barmes never was able to make a throw.

Then in the sixth, Lackey sent a bomb to left-center after McDonald’s two-run homer, and came around to score on Marco Scutaro’s single to right. Again, he showed good wheels as he chugged around the bases.

“Don’t count on that,’’ Lackey said about two hits off Jimenez. “He’s a special pitcher. You’ve got to give our offense a lot of credit.’’

The good things Francona mentioned had to deal with Nava, the kid who keeps hitting. There does not appear to be any situation too big for Nava, who keeps making a case that he should stick on this team. We’re talking two gap doubles against a guy who has made everyone look sick.

And McDonald, who grew up 20 minutes south of here in Cherry Creek, banged the homer off Jimenez and said afterward, “It feels good to hit a home run. To come home and hit one is special.’’ On Jimenez, he said, “To me he looked good all game.’’

Jimenez said his illness the day before — he was throwing up, was dizzy, and felt feverish — was not a factor in how he pitched.

“Everybody is due for an off night,’’ said Colorado manager Jim Tracy.

What Jimenez found was this Red Sox lineup, even with guys named Nava and McDonald, is about as good as he’s going to face.

The Sox did what no team has been able to do against him — keep him to fewer than six innings and score more than three runs.

You’ve got to be kidding me!