THIS STORY HAS BEEN FORMATTED FOR EASY PRINTING
Red Sox 6, Diamondbacks 2 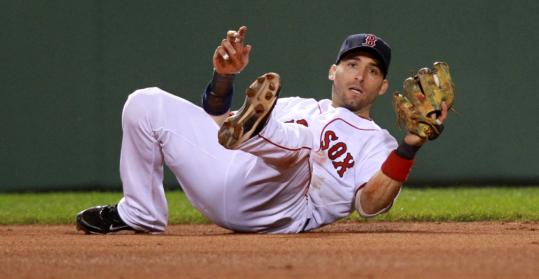 Dustin Pedroia was loose before the game, as he is before most games. He spent a half-hour sitting in the dugout cracking up with some teammates, when an opportunity appeared. A reporter was live, on air, in the dugout, and Pedroia had his target. The bag of sunflower seeds hit, not a surprising development, as most of what Pedroia has set out to hit of late has been right in his zone.

That continued once the game began, as Pedroia hit the fifth pitch he saw just over the Green Monster, getting the Red Sox on their way to a 6-2 victory over the Diamondbacks.

The homer was his ninth of the season, first in 117 at-bats. The last time Pedroia hit a pitch out of a ballpark was on May 14 off Max Scherzer in Detroit — one day before Pedroia hurt his right knee.

“Everybody knew it was coming,’’ Mike Cameron said. “The guy’s always hit. I think he was starting to lose more of his hair when he wasn’t.

“The good thing about it is he always puts the bat on the ball, and that always seems to help when you’re able to put the bat on the ball and find holes. Sometimes he overworks himself. We’ve got to keep him from going out early hitting sometimes. He’s a good hitter, for one, and never, never doubt his confidence in himself.’’

It’s clear that the knee has ceased to bother the second baseman, as the heat has continued to radiate from his bat. After last night’s 2-for-4 game, Pedroia is batting .500 over his last six games, with extra-base hits in each of his last five. Not only that, he added a stolen base in the third inning, a sure sign that his knee is much improved.

The Sox scored early and added on, winning in the same manner they had the night before — right down to the boost from Pedroia. It is the fifth straight series in which the Sox have won the first two games. They will try to break the second half of that streak tonight — for they have lost the third game of each of those series.

With losses by the Yankees and Rays, the Sox narrowed their deficit in the American League East to just three games, the smallest it’s been since April 16.

For that, his teammates can thank Pedroia, who said of his offensive improvement in light of the .167 slump over 19 games that preceded it, “You don’t shake [slumps] off, then you’re not very good. I’ve hit every year of my whole life. I don’t think it’s ever going to stop.’’

Asked where he gets his power, Pedroia joked, “I’m strong. Drink milk.’’

It certainly looked that way last night, as Pedroia added a third-inning single to his first-inning homer. The Sox got two more in the third, as Pedroia was driven home by a J.D. Drew double, and David Ortiz (walk) was driven home by an Adrian Beltre infield single. The scoring was wrapped up in the seventh when Kevin Youkilis knocked a two-run shot of his own, also going out to left.

But that wasn’t all the Sox needed, requiring another assist from Jon Lester. Even though the lefthander returned an initial lead, he managed to keep the Diamondbacks down from there, with a brief shaky moment in the fourth. He went seven innings, allowing two runs on four hits, striking out seven, walking three, and hitting two (both with cutters), before handing over the lead to Daniel Bard.

Lester controlled the hitters, though he struggled with his mechanics. He made his main mistake on a pitch to Justin Upton that the right fielder blasted onto Lansdowne Street for a two-run homer. Still, this was not the Lester who has rejected all comers over the last two months. It wasn’t quite that easy.

“He was leaving pitches up,’’ Victor Martinez said. “He was trying to come in on righties and throwing pitches middle away and up in the zone.

“I tell you what, that shows you what kind of pitcher he is. He was able to find a way and make pitches to get out of jams and keep us in the game.

“It was tough for him tonight. He was battling against himself.’’

Lester continued his win streak, having taken each of his last eight decisions over 11 outings. In that time, he is 8-0 with a 2.01 ERA, and hasn’t lost since April 18.

Lester was able to use his changeup effectively, with Martinez calling for it over and over in the fourth inning particularly. That was the frame in which Lester loaded the bases with one out.

He walked Chris Young, gave up a single to Miguel Montero, and walked Upton, putting himself in a tenuous position. No need to worry. Lester struck out Rusty Ryal for the second out, then got Chris Snyder to fly to center.

“His command wasn’t what we’ve seen,’’ manager Terry Francona said. “Couple innings, to start the inning, it looked like he had trouble — I don’t know about finding his arm slot, but ball one, ball two, ball three. Saying that, he pitches seven innings, gives up two.’’

And Pedroia wasn’t only helpful with reporters. He also aided a certain announcer in coming up with a new home run call, which debuted on Pedroia’s shot in the first inning.

“I hear all these other announcers, they’ve got all their ‘look at me’ calls,’’ Pedroia said. “And Don [Orsillo] is pretty boring. We’ve got to try to step up his game a little bit, ’cause nobody really gets on him. So that’s kind of my job, too, to wear him out a little bit.’’