With new Sox program, your ticket’s as good as cash. But there’s a catch... 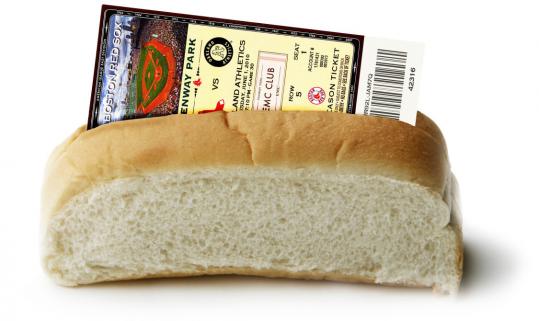 With a swipe of a Red Sox ticket, some fans can do more than see a baseball game at Fenway Park.

A pilot program now underway uses barcode technology to add the cost of concessions to some tickets. That means fans can pay for a $12 hot dog, an $8 beer, or a $25 baseball cap with a swipe of their ticket at a register.

“It’s an easy and convenient way for fans not to have to carry cash or use a credit card,’’ said Ron Bumgarner, Red Sox senior vice president for ticketing. “It’s not so much a high-end premium type of corporate offering. This is more for fans.’’

Barcode loading, as it is called, is already available at a few Major League venues, like AT&T Park, where the San Francisco Giants play, and Citizens Bank Park, home of the Philadelphia Phillies. At Fenway, officials are experimenting with the program in two sections totaling about 500 seats — the Budweiser Roof Deck and a reserved seating area of the Pavilion on the left field line.

Next season, Red Sox officials plan to allow anyone to add the cost of concessions to ticket barcodes, probably in $5 incre ments. Bumgarner said officials have no immediate plans to make the add-ons mandatory, but the idea makes some fans uneasy.

“Enough is enough,’’ said Andy Zaremba, bartender at Blasi’s Cafe in Dorchester. “One night at Fenway is already like a week’s pay for a lot of people.’’

The team has partnered with Aramark Corp. food service vendors to offer the program using technology developed by Givex Corp., a technology company with offices in the United States, Hong Kong, and other locations. As part of the deal, the Red Sox will pay Givex an annual licensing fee of $50,000 for the next three seasons.

The Phillies were the first team to introduce barcode loading in 2004, a change that came with the opening of the team’s new ballpark. The program is currently offered in about 1,500 of the park’s 43,651 seats. For example, season ticket holders with seats in the section behind home plate pay for “power tickets’’ as they are known, that include a mandatory extra $10.

Chris Pohl, director of ticket technology for the Giants, said fans seem to like the feature. The team occasionally offers power tickets with a $5 credit for Fan Appreciation Day or gives away $5 and $10 barcode credits for home runs hit off a particular pitcher.

Customers who don’t spend all of their loaded-on money during a game cannot roll it over. He said he has seen long lines of fans using up their credit on merchandise before leaving the park.

Some ballpark regulars, like David Cohen, a law professor at Drexel University and cofounder of the Phillies fan blog The Good Phight, are unimpressed. He said he thinks power tickets are simply a way to squeeze more money out of people.

But Russ Stanley, vice president of ticket sales for the Giants, said the program has plenty of supporters in San Francisco. The Giants began testing the barcode program in 2008 to boost slumping ticket sales. Tickets selling for $18, for instance, included a $5 credit for concessions as an enticement.

“It was basically a gift from the Giants rather than lowering the price,’’ said Russ Stanley, vice president of ticket sales.

At Fenway, where there have been almost 600 consecutive sellouts, officials don’t need to offer many incentives. Currently, the program requires people sitting on the Budweiser Roof Deck to pay $90 for seats and $25 for food, but those seats have always included the cost of a meal.

Mike Mitchell of Dorchester, a Sox fan and a regular at Blasi’s, said it made sense that the park would want to offer loaded tickets. It’s a win-win.

“Let’s face it, you’re going to spend it,’’ he said. And leftover money gets sacrificed at game’s end.