THIS STORY HAS BEEN FORMATTED FOR EASY PRINTING
Royals 12, Red Sox 5 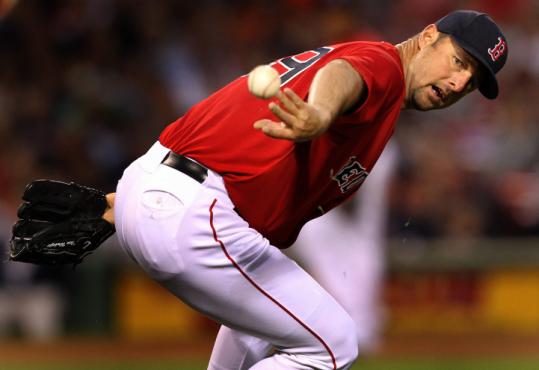 The on-again, off-again Sox should be thankful their basketball cousins took attention from another debacle as Kansas City cruised to a 12-5 victory.

After winning five of six against the first-place Philadelphia Phillies and Tampa Bay Rays on the road, the Sox have lost the first two games of the series against the Royals, who arrived at Fenway nine games under .500.

Now the Sox will face Kansas City ace Zack Greinke tonight, having lost three of five games against the Royals this season.

“We got our [butts] kicked,’’ David Ortiz said. “You come back and play the game. Turn the page. We were playing so well. Not that we were taking anything for granted. Kansas City, they play the game to win, too. That’s what they’ve been doing the last few days.

“I guess that’s how the game goes. You feel like you’re on top of your game and you get [a performance] like that. That’s why you’ve got to get a fresh mind. You’ve got to come back and fight.’’

A night after they drew eight walks against Daisuke Matsuzaka, the Royals drove Tim Wakefield (1-3) off the mound in the fourth inning.

The righthander looked every bit his 43 years, giving up nine runs on 12 hits and three walks. The nine earned runs were the most Wakefield has allowed as a member of the Red Sox. He gave up nine against the Reds July 2, 1993 while playing for the Pirates.

“I feel bad for the guys out there,’’ Wakefield said. “It’s embarrassing.’’

The Royals finished with 20 hits, their most at Fenway Park and most overall since July 9, 2005 against the Twins. Every Kansas City starter scored at least one run and had at least one hit.

The last three hitters in their order, Mitch Maier, Yuniesky Betancourt, and Jason Kendall, were 8 for 14 with seven RBIs.

By the top of the ninth inning, the Red Sox sent utilityman Bill Hall out to pitch for the first time in his nine-year career. He retired all three batters he faced on ground balls as the crowd finally had something baseball-related to cheer.

“I felt good. I hadn’t pitched since high school,’’ said Hall, who threw only fastballs and hit 89 miles per hour. “It was always something I always wanted to do just to see if I still had it.’’

The Red Sox built a 5-2 lead for Wakefield after three innings thanks to an early burst of offense against Royals starter Kyle Davies.

Marco Scutaro doubled to lead off the first inning and scored on an opposite-field single by Ortiz, who arrived roughly 90 minutes before the game after attending a memorial service in New York for former big league pitcher Jose Lima, who died Sunday.

Ortiz chartered a private plane to ensure he would return on time.

After Kevin Youkilis walked, Victor Martinez lined a two-run double that rolled into the triangle in center field.

The Sox added two more runs in the third inning. Youkilis walked again, giving him 31 for the month. The only Red Sox player to have more walks in May was Ted Williams, who drew 34 in 1946.

Martinez followed with a home run to right field, his seventh of the season.

But Wakefield quickly gave the lead away and then some in the fourth inning.

Wakefield gave himself a chance to limit the damage by getting Jose Guillen on a pop and Alberto Callaspo struck out.

“I saw the same amount of hits you did,’’ Sox manager Terry Francona said. “We’re trying, shoot, not only to get through the fourth [but] maybe have him reel it in.’’

But the third out evaded Wakefield. He threw a wild pitch that allowed Aviles to score. After Maier walked to reload the bases, Betancourt hit a fly ball to left field that just cleared the wall for a grand slam.

“The last hit completely obliterates the linescore,’’ Francona said. “It’s a huge cushion for them.’’

If his bad back cooperates, the Red Sox hope to have Josh Beckett come off the disabled list Thursday and start against Oakland. That would send Wakefield back to the bullpen.

Davies (4-3) lasted only five innings, giving up five runs on seven hits, but it was enough to get the win.

With the Sox down, 10-5, Francona went to Hideki Okajima, one of his usual setup men for the eighth inning. He allowed a double by Callaspo before Maier hit his first homer of the season. That’s when Hall was asked to warm up.

The Royals are 9-5 under new manager Ned Yost.