Ellsbury bumped back on DL 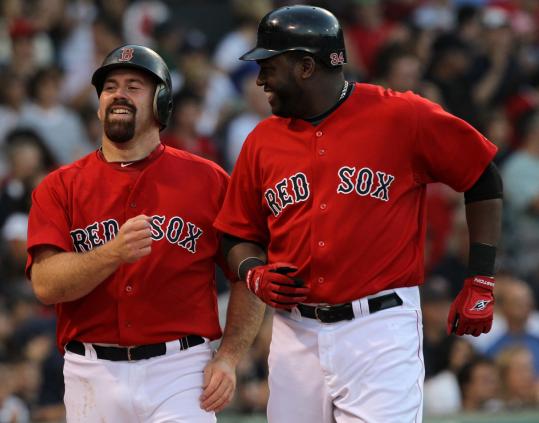 Kevin Youkilis and David Ortiz were all smiles after they scored on Victor Martinez’s double to center field in the first inning. (Barry Chin/Globe Staff)
By Peter Abraham Globe Staff / May 29, 2010

Jacoby Ellsbury was placed back on the disabled list yesterday. And although manager Terry Francona expressed hope his return would come quickly, there is little evidence to suggest that will be the case.

“He advised me that I needed to be at a further state of healing before I resumed play,’’ Ellsbury said. “To this point right now, I really don’t have a timeline for when I’m going to come back.

“I’m going to do everything I can to get back on the field as soon as possible.’’

Ellsbury suffered hairline fractures in four ribs on the left side of his chest in a collision with third baseman Adrian Beltre April 11. The Red Sox, believing Ellsbury would recover quickly, waited nine days before placing him on the disabled list.

Ellsbury was out for 40 days, then played only three games, going 1 for 14 before announcing Tuesday he was unable to play after feeling pain swinging at balls off a tee before a game at Tampa Bay.

Donahue did not find a second injury, but there is what Francona described as soft-tissue “trauma’’ in the area, including Ellsbury’s back.

“Basically I tried to play with a level of discomfort knowing that I wasn’t 100 percent and doing so worsened my condition,’’ Ellsbury said. “The way it looks now, I came back too soon.’’

That led to the examination.

“We wanted him to see somebody that wasn’t familiar with what he’s been going through, kind of allow Jacoby to walk through the whole thing and what he’s been feeling,’’ Francona said. “[Donahue] didn’t disagree with anything, the progression that’s happened, playing and trying to play.’’

Ellsbury was upset the cracked ribs weren’t discovered until several days after the injury and was critical of the medical staff, something he apologized for. But he found no fault in the decision to come off the disabled list when he did.

“We were all on the same page,’’ he said. “We all knew that I wasn’t going to be fully healed. But we thought that it wouldn’t regress, it wouldn’t worsen.’’

This time, it’s clear the Sox will be much more cautious before clearing Ellsbury to play.

“We’re going to back off a little bit, let him try and feel a little bit better where he can play and not go backward,’’ Francona said.

“It’s going to go on how he feels, the symptoms. We want him to be able to come back and play and play successfully and so we’ll try and communicate as best we can with him [and] the medical people as we always do and make the right decisions.’’

Ellsbury has played only nine games and now will be out until June 11 and probably well beyond that.

Motivation guaranteed
Dustin Pedroia was 0 for 5, making him 9 for 60 (.150) with two RBIs in the last 15 games. He denied speculation that his right knee is bothering him.

“That’s nothing. There’s nothing wrong with my knee,’’ he said. “I don’t make excuses for my play. I play hard every day.’’

“I can guarantee you that I won’t end the year hitting .260 or whatever I’m hitting now. I can guarantee that and I don’t guarantee a lot . . . I work more than anybody in baseball, that’s a fact, too. I’ll definitely put the time in and make sure that I have a great year.’’

Dish network
Victor Martinez was behind the plate for the first time since Monday, when a foul tip struck him on his left big toe.

The Red Sox were glad, given he’s the personal catcher for knuckleballer Tim Wakefield.

“It’s a convenient time for him to be available,’’ Francona said.

Martinez ran with a noticeable limp when he doubled in two runs in the second inning. He also hit a two-run homer in the third. But he said before the game he was ready to go. His only fear was another foul tip in the same spot.

“I just hope I don’t get hit there,’’ Martinez said. “If I get another hit right there again, you’re going to see a grown man cry on the field.’’

Martinez had a hole drilled in his toenail to drain fluid that had accumulated.

Beckett loosens up
Josh Beckett, who is on the disabled list with a sore back, threw more than 20 pitches on the mound. If he feels good, he could repeat that process tomorrow.

The Sox remain hopeful he will be able to make start Thursday against Oakland.

“If there’s any hesitancy, we’re going to be cautious with him,’’ Francona said. “I think we need to be. If we force this, it’s going to be wrong.’’

Leg work
After his walk on the wild side Thursday, Daisuke Matsuzaka said his legs were giving him trouble. That was news to Francona and pitching coach John Farrell. “That was the first I heard of that,’’ Francona said. “He didn’t express that to us.’’ . . . Major League Baseball fined umpire Joe West, who worked third base last night, in the wake of a dust-up with the White Sox earlier in the week. “I will say it’s none of your business,’’ West said when asked by the Associated Press what the fine was. MLB also fined White Sox manager Ozzie Guillen and pitcher Mark Buehrle. The two were ejected by West Wednesday for arguing a balk call. West was apparently disciplined for having a personal publicist reveal he was headed for Boston and would be available for interviews . . . Alan Embree, who was released by the Red Sox earlier this month, was released by the White Sox yesterday after allowing 11 hits and five walks in 7 1/3 innings for Triple A Charlotte.