THIS STORY HAS BEEN FORMATTED FOR EASY PRINTING
Red Sox 2, Rays 0 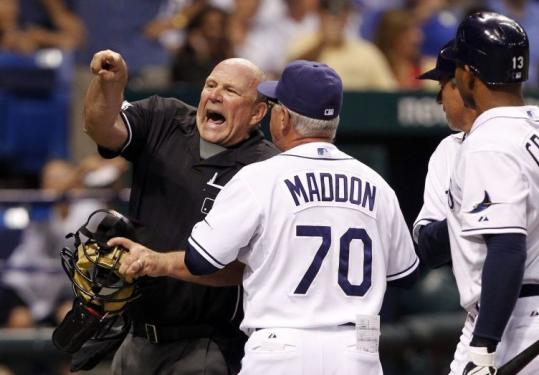 Rays manager Joe Maddon is, well, maddened by a strike call and gets the heave from plate umpire Bob Davidson. (Mike Carlson/Associated Press)
By Amalie Benjamin Globe Staff / May 26, 2010

ST. PETERSBURG, Fla. — The numbers are shocking, both for Jon Lester and the rotation he heads. So this is what general manager Theo Epstein had in mind.

Even against the Rays, a team that has scored the third-most runs in baseball on its way to compiling the best record in the majors, the dominance of Red Sox starters continued in a 2-0 blanking of the Rays last night at Tropicana Field.

Over the last seven games, Sox starters have a 1.44 ERA. Over the last four, they’ve been even better, with just one earned run allowed, total, among Daisuke Matsuzaka, Tim Wakefield, Clay Buchholz, and Lester.

“We’re just playing better baseball,’’ Lester said. “That’s what we kept saying from the beginning. We weren’t playing good baseball. We were not playing smart baseball. Our starters weren’t going deep into the game. Now we’re getting on a little bit of a roll. Like we kept saying, we get on a roll, we start playing better baseball, this is a good team. I don’t think people really believed us, but I think we are a good team.’’

They’re certainly getting there.

Even though Lester was hardly his best, not even close, he threw six scoreless innings. He was off his game enough to walk five batters, even on a night when the strike zone was wide enough to prompt a nose-to-nose confrontation between plate umpire Bob Davidson and Rays left fielder Carl Crawford, and then another heated argument between Davidson and Rays manager Joe Maddon, both of which re sulted in ejections.

“You’ve got to make adjustments,’’ Maddon said. “They were taking advantage of it. Lester kept throwing to those spots and [Jason] Varitek kept catching the ball well in those spots, so they kept getting those pitches and that’s the way it works sometimes. That’s bully for them because they took advantage of it.’’

Lester kept Tampa Bay off the board, allowing just one single to Willy Aybar. It was his fifth win in his last six starts, and he is unbeaten over his last seven starts, going 5-0 with a 1.45 ERA with 58 strikeouts in 49 2/3 innings. The Sox have won seven of eight, against such contenders as the Yankees, Twins, Phillies, and Rays, reversing their deep early-season slump.

“You can’t figure this game out sometimes,’’ manager Terry Francona said. “I know I’m supposed to sit here and give you guys answers. Sometimes it’s better just to sit back and let them go, kind of stay out of the way. We have got some really good pitching.’’

And they got just enough offense, courtesy of a two-run double from the suddenly bubbly Big Papi in the third. David Ortiz stepped to the plate with two outs and two on, J.D. Drew having singled and Kevin Youkilis having walked. He ripped one to left-center, scoring both runners.

“That was our offense,’’ Francona said. “He drove in two, and then put your seat belt on and hold on. [James] Shields was tremendous.’’

After Ortiz’s double, the fourth hit of the game, Shields set down the next 16 batters. The Rays were hardly doing better against Lester.

The game ended as a combined one-hitter, with Manny Delcarmen, Daniel Bard, and Jonathan Papelbon each submitting a scoreless inning, as the Sox guaranteed themselves a series win. It was especially impressive given that the Rays were a major league-best 15-5 in games in which the opposing team started a lefthander, and 10-1 in their last 11 games against a lefty, the one loss the perfect game by Dallas Braden. Make that 10-2.

“It’s obviously good,’’ said Varitek, who has now caught consecutive one-hitters. “But that’s what we were missing for a period of time. I think it’s a matter of time before that consistently takes over.

Lester said he had a hard time getting into a rhythm, calling the game “a battle from the beginning.’’

“I don’t think he felt quite probably as strong and powerful, and he really had to kind of battle himself and had to work,’’ Varitek said. “It didn’t come easy for him. He just proved, I think, a lot to himself that he can stay within himself, execute pitches, and not feel his best or have his 98 [m.p.h.]’’

Even with the walks, Lester still didn’t allow a man to reach third after Jason Bartlett (who walked three times) got that far with two outs in the first. He was stranded, and the Rays never got that close again.

The win means the Sox have gone 8-4 during a stretch that could have badly damaged their playoff hopes. The team has crept ever-closer to the Yankees and Blue Jays, currently below the Rays in the American League East standings.

“When you have everything in chaos for a little while, you can’t evaluate,’’ Varitek said. “It’s like a couple years ago when we had bullpen by committee. Well, we had some pretty good arms. We hadn’t seen them good yet. It’s like these players here, let’s see them good, and then everything will settle down.’’

“We took it kind of personal,’’ Lester said of the early-season woes. “We want to go out there and we want to do well. Obviously, on any team, the starters are the backbone of the team. If they’re not going deep into games, then you’re using that bullpen a lot, it just puts pressure on them. If we’re able to go deep in the games, like we’ve been doing, good things will happen.’’