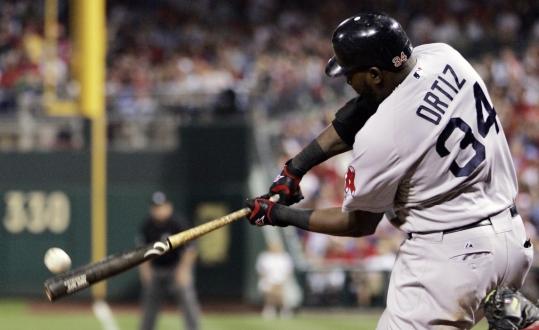 First baseman David Ortiz did some damage at the plate, ripping an RBI double in the fifth. (Tom Mihalek/Associated Press)
By Amalie Benjamin Globe Staff / May 23, 2010

PHILADELPHIA — One start after Daisuke Matsuzaka had been so far from the same page as Victor Martinez that the pair had a mild war of words through the media after the game, the pitcher threw his best game of the season against the Phillies — this time with Jason Varitek behind the plate.

Matsuzaka hadn’t even lasted five innings in his last outing, allowing seven runs on nine hits against the Yankees, and questioned the pitch selection after it was over. Martinez also questioned Matsuzaka for shaking him off too much over the course of the game.

The pair sat down the next day in New York and discussed what happened. And apparently they figured something out.

When asked about his pitch selection last night following his near no-hitter, Matsuzaka gave a nod to Martinez, saying, through interpreter Masa Hoshino, “That reminds me, but I spoke to Victor after my last outing. I’m not going to get into the details, but he did point out one thing that helped me prepare for this start. So I focused on that as I went out there, but at the same time it’s not like I had a big discussion with Tek going into this game.

“I think that Victor just mentioned this very casually, but it helped me avoid putting myself in a tough situation out there.’’

Matsuzaka wasn’t prepared to share more after the Sox’ 5-0 victory. Martinez wasn’t talking either. The catcher smiled slightly when asked the question, but didn’t want to reveal a thing.

“That’s between him and I,’’ Martinez said.

The next time Matsuzaka is scheduled to pitch is Thursday at home against Kansas City. Manager Terry Francona will have a decision to make, to keep the pairing or not.

“People have to understand one thing,’’ Varitek said of being Matsuzaka’s catcher. “You start doing that as a team, and it puts your starting catcher in an awkward position in that he doesn’t get the right days off. I need to play when [Martinez] needs to not play, and it doesn’t matter who’s on the mound. You start getting into personal catchers and all this stuff.

“I was fortunate today. Dice was powerful through the zone. If we allow everybody else to build together, it doesn’t matter. I need to play when he needs to not play, not when somebody’s on the mound.’’

Ellsbury returns
After an absence that stretched from April 11 to May 21, Jacoby Ellsbury was activated from the disabled list and in the leadoff spot last night, playing center field. The Sox designated Jonathan Van Every for assignment.

Ellsbury went 0 for 4 last night with a walk and run scored.

That’s something that will likely continue until the return of Mike Cameron, which will push Ellsbury back to left. But Cameron, who has been out with a lower abdominal strain since April 19, is likely to need extra days off after he comes back.

“That’s very realistic,’’ Francona said. “He played three days there, and then we backed off a little bit, he played two. I think that that would be kind of common sense to do that.’’

Cameron sat out yesterday’s doubleheader in Portland, taking a “regen day,’’ according to Francona. Cameron will be back in the lineup today, and then the Sox will assess him.

Halladay on deck
The Sox face Roy Halladay today, a foe they know well, though it will be the first time with him in a Phillies uniform. Boston has been one of the few teams with some success off the ace, with a 14-14 record against him. Halladay also has a 4.28 ERA against the Sox.

“Stay in the middle of the field,’’ Francona said was the trick to beating him. “That’s easier said than done. When you don’t stay in the middle, you’re always that one pitch from a double play.

“We’ve made him work. There’s been times we’ve beaten him. There’s been a lot of times he’s beaten us. You try to make him work for everything he gets.’’

As for whether the Sox were upset to see him leave the AL East, Francona quipped, “I wish he’d have gone to the National League Central, or whoever the [heck] we’re not playing.’’

Cold snap
After an 0-for-5 effort last night, Dustin Pedroia is suffering a rare slump, going 4 for 35 over his last nine games to lower his average to .267. “He won’t be in it very long,’’ Francona said. “Sometimes when we’re not scoring, he takes the burden. You can see it in his swings. It’s a great quality. Sometimes it gets you in a little bit of trouble in your at-bats. I care when he doesn’t get hits, but that’s probably not our biggest concern. If we’re looking up and thinking Pedroia’s not hitting, that’s low on the list. He’ll be all right. Guys like Pedroia that play through nicks and being banged up, they’re going to take 0-fers at times. That’s part of the game.’’ . . . In discussing Marco Scutaro’s move to eighth in the order, Francona added an interesting nugget. Though Pedroia struggled when put in the third spot earlier this season (.091, 2 for 22), Francona said, “I still kind of like it.’’ . . . J.D. Drew ran before the game to test his sore hip flexor. The right fielder went 2 for 4 with an RBI . . . The Phillies placed shortstop Jimmy Rollins on the 15-day disabled list again after he aggravated a right calf injury Friday night . . . Last night marked the longest start Matsuzaka had gone without allowing a hit. It was the third time he had pitched eight scoreless innings . . . The last combined one-hitter for the Sox was July 18, 2006, against Kansas City, when Jon Lester and Jonathan Papelbon put together the performance. Daniel Bard pitched a hitless ninth last night.