It's long after 7:05 p.m. So why are these ticket holders watching the Sox from Yawkey Way? 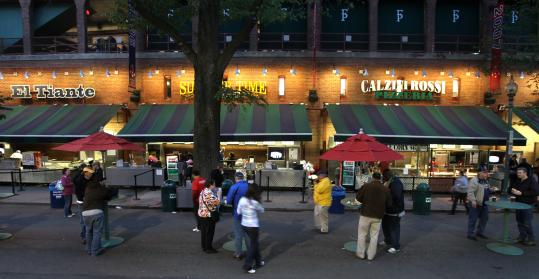 While the game goes on inside Fenway Park, ticket holders linger on Yawkey Way, watching on TV screens near the food vendors, having a less frantic time before they mosey into the park. (John Blanding/Globe Staff)
By Sam Allis Globe Staff / May 18, 2010

Jay Coughlin is nursing a beer with a friend under a red umbrella at one of the stand-up tables out on Yawkey Way. The game against the Los Angeles Angels of Anaheim has already begun. The light is starting to thin, but they’re going nowhere anytime soon.

And thus begins the Fenway nocturne. It comes to life on Yawkey after the first pitch is thrown and blossoms in the dark of evening. It becomes, after most Red Sox ticket holders have gone in, a quiet affair a world away from the cacophonous pregame scene on the street and at nearby watering holes like Boston Beer Works and Cask’n Flagon. It restores breathing room absent before the game.

On game nights, Yawkey is a strip of controlled chaos that runs along the west side of Fenway from Brookline Avenue to Van Ness. An hour before the first pitch, it becomes one of the densest patches of real estate this side of Hong Kong and has the feel of a Mardi Gras bash. But no one can join this party unless they make it past the turnstiles at either end of Yawkey Way with a ticket to the game.

Once into the fray, fans confront a scene of sensory overload: The rock music blaring from speakers, the smell of sausage grilling among a raft of food and drink concessions, the gaggle of souvenir stores, and the bank of television screens mounted along the wall of Fenway.

Coughlin belongs to the tribe that spends innings on Yawkey, luxuriating in the peace and the privacy, rather than hooked up to the electricity inside. He, like most, eventually goes in, but at his leisure. He remembers the mayhem for a Bruce Springsteen concert, where he was stuck for 45 minutes trying to get in. It is easier, he argues, to wait for everyone else to go first.

Other Yawkey constituents go in and out every few innings. A tiny band never goes in at all. At any given time during the game, says a security staffer, there are about 100 people on Yawkey.

It might seem inexplicable that someone would pay a hefty sum for a ticket only to waste it out on Yawkey for big chunks of the game. What about the magic of Fenway Park? The sliders and homers, the double plays and strikeouts? The brilliant green and the seventh-inning stretch? Are they deranged?

“It’s my favorite place to be,’’ says Amy Holmes of Braintree, about Yawkey Way. She is still there with her husband, Anthony, well into the third inning with no apparent itch to go in. “We have more fun out here than we do inside. You meet the best people. Why do I want to keep going in?’’

Holmes says she spent all of the previous two Red Sox games she attended on Yawkey. She lasted three innings inside of another. That doesn’t mean she and her husband aren’t diehard fans. Anthony displays a Sox tattoo he got on the back of his calf after the team won the 2007 World Series.

Randy Deschenes and his wife from Middleton are drinking beer at a stand-up early in the game. Asked if they’re concerned about missing the first pitch, he replies, “We’ve already missed it. I’ve been to a hundred Red Sox games and the opening pitch is always the same. There are nine innings of baseball.’’ The couple eventually heads in during the second inning.

The last light is disappearing. There’s a lovely breeze in the night air. As darkness arrives, couples lean into the tables, talking softly to each other. Singletons nurse frosties and use their cellphones. Scofflaws’ cigarettes glow in the dark, when the ranks of the tobacco police have thinned.

A community forms, based on its members’ respect for each other’s privacy. All watch the game at some point on one of the four TV screens mounted behind the bank of food and drink vendors. They are not huge, but they are high-def and present a crisp picture of the action inside. (There are more screens, turned off tonight, in souvenir store windows across the street.)

People murmur to each other in the dark about a pitch, a catch, a hit. It’s easy to read the crowd noise inside — the cheers, the boos, the sighs — that punctuate the quiet. There’s a sudden eruption inside, followed instantly by “Youk, Youk, Youk.’’ Sox stalwart Kevin Youkilis had produced again. “I’d say it’s a home run,’’ someone offers. It was.

The talk turns to Camden Yards in Baltimore, where people outside the park can watch the game because of a low wall behind the outfield. It would be nice, all agree, to be able to do that, but would you really want to trade Fenway for it?

It’s easy to forget the sweet chaos before the game, where people 100 feet apart find each other by cellphone, and a vendor delivers slices of pizza over a green mesh metal fence to customers who have already made it past the turnstiles. A middle-aged woman waiting in the beer line, asked to prove she’s 21, purrs, “The only reason I come to the game is to get carded.’’ The souvenir shops across the street do a great business but, as one salesman at the cavernous Red Sox Team Store notes, the real action comes after the game, when the crowds stream in. “That’s when they’re four deep,’’ he says.

One charm of the Fenway crowd is that they do not care what they look like, nor do they care what anyone else looks like. They register the sights and smells and sounds around them without focus. They are simply swept along.

Tonight, the Sox are competing for attention against televised Celtics and Bruins playoff games. Why would anyone choose the laboring Sox over those teams that have done so well?

“Because the Red Sox just got swept by Baltimore and need our help more than the Celtics and Bruins do,’’ says Larry Bleiler, up from Georgia with his son Chad, who flew in from Colorado. The two sip beer together at a prized stand-up table. “They’re supposed to have a defensive club this year? They’re next to last in defense.’’

Chad, who got the tickets, planned to stay through the three-game Yankee series. His wife was even flying in for it. Meanwhile, his father catches every Sox game on television down in Georgia. They plan on watching every minute of the game.

“I have to go to work the next day. When they lose, I miss one day of work,’’ the elder Bleiler says with a grin. (He owns a company.) That’s an improvement, he adds, over the time when he would take the whole week off.

Coughlin, by contrast, savors Yawkey Way a while longer. “The one drawback,’’ he says, “is there’s no outhouse here.’’