Another round of torture 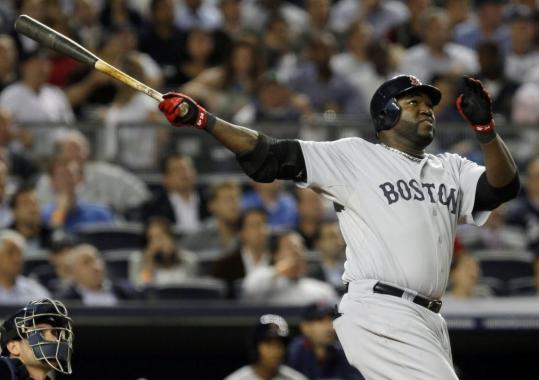 David Ortiz was in classic form on this solo home run to right field in the fourth inning. (Mike Segar/Reuters)
By Dan Shaughnessy Globe Columnist / May 18, 2010

NEW YORK — Friday night the Bruins were like the old Red Sox.

And now the Red Sox are the Bruins.

Underachieving. The opposite of clutch. Hard to watch. Not worthy of the love of the legions back home.

The 2010 Red Sox sank to a new low last night when Jonathan Papelbon surrendered a pair of two-run homers in the bottom of the ninth in an excruciating 11-9 loss to the Yankees. The late-night implosion erased a noble comeback in which the Sox recovered from a 6-1 deficit (next bus to Lake Wobegon for you, Dice-K) to take a 9-7 lead on five home runs in the Bronx bandbox.

Seasons are defined on nights like this and it looks like these Red Sox might be remembered as the Lost Boys of 2010. With almost a quarter of the season gone, Run Prevention has morphed into Win Prevention. This is the latest the Sox have been under .500 in a season since Nomar Garciaparra was a rookie in 1997.

Nomie was on hand last night, broadcasting for the Worldwide Leader alongside Aaron Boone. It was somehow appropriate that Boone was in the house for this Red Sox loss — one that cost Tim Wakefield (2 1/3 innings of shutout relief) his first victory since July.

“It’s tough,’’ said Dustin Pedroia. “We played our butts off. We were down early against a guy like [Phil] Hughes. We battled. It happened really fast. But there’s a lot of season left. We’ve got a lot of games to go and prove to everybody that this team is not going to quit.’’

Maybe it’s just not going to happen. The Sox have nine more losses than Tampa Bay and seven more than the Yankees. They are 2-9 against Tampa and New York and 10 of those games were played at Fenway. They have lost 14 of their last 17 against New York and face CC Sabathia tonight. After tonight, they play eight games (six on the road) against first-place teams from Minnesota, Philadelphia, and Tampa. Have they given us any reason to think they can mount a comeback in the AL East?

It’s the pitching, not the hitting, that’s killing the Red Sox. They are second in the league in most offensive categories. They’re scoring plenty of runs. But how can you lose a game in which you hit five home runs?

Papelbon makes for an easy goat and there no doubt will be nonsense about making Daniel Bard the closer. Forget that noise. Daisuke Matsuzaka, the $102 million man, crushed the Red Sox again in his fourth start. Mr. Gyroball threw 25 pitches before getting an out and put the Sox into a deep hole.

It went like this: Single, single, walk, single, single, double. In fairness, Jeremy Hermida missed a ball in left that could have been an out. It was not an easy play, but UZR-challenged Jason Bay would have had it. Wakefield was throwing in the bullpen when Matsuzaka fanned Randy Winn to end the first. A couple of hours later, Wake got in the game. He’s wearing the face of the silent fury.

The Sox scored in the second on a couple of singles sandwiched around a wild pitch, then gave it right back when Brett Gardner, who had walked, scored on a “double’’ by Mark Teixeira that clanged in and out of the glove of center fielder Darnell McDonald. It should have been an out, but in 2010, getting charged with an error is like getting called for traveling in the NBA: it’s pretty hard to do. McDonald did not have an easy play, but he got there in time and the ball rattled in and out of his mitt.

Down, 6-1, the Sox rebounded with a barrage of homers — David Ortiz, J.D. Drew, Kevin Youkilis, and Victor Martinez (twice).

“There was a lot of enthusiasm in the dugout,’’ said manager Terry Francona. “We battled and got the lead. We just couldn’t hold it.’’

Making things all the more painful, it was the much-loathed Alex Rodriguez who tied the score with a majestic two-run shot to left-center. With two outs, Papelbon hit Francisco Cervelli with an 0-and-1 pitch. The immortal Marcus Thames ended it on the next pitch. Sweet revenge for the oft-plunked Pinstripes. Gag-prone Javier Vazquez picked up the victory.

“This had a chance to be a great win,’’ said Francona. “We just have to accept it and move on.’’

Tonight Josh Beckett (7.46 ERA) makes his first appearance since that freaky Friday at Fenway against the Yankees (nine earned runs) when he imploded in the sixth inning, hitting Robinson Cano and Derek Jeter before he was finally lifted. Several Yankees, including Sabathia, were spotted on the top step of the dugout yelling at Beckett.

After tonight, the Sox and Yankees don’t play again until Aug. 6. Sox fans hope the season is not already over by then.