THIS STORY HAS BEEN FORMATTED FOR EASY PRINTING
Red Sox 7, Tigers 2 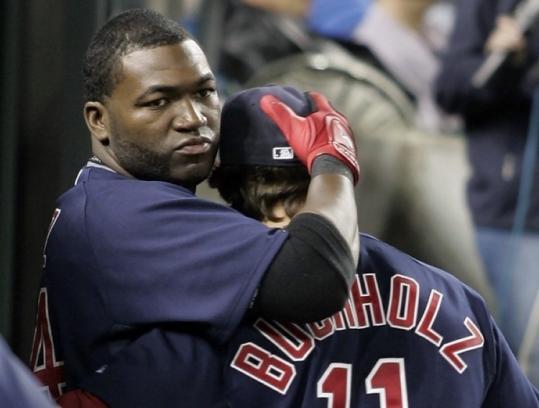 David Ortiz supported Clay Buchholz with four RBIs, then showed the pitcher some love when he came out in the seventh. (Duane Burleson/Associated Press)
By Peter Abraham Globe Staff / May 15, 2010

DETROIT — We should know a lot more about the Red Sox in two weeks than we do now. Last night’s game against the Detroit Tigers started a portion of the schedule in which the Sox play 13 games in as many days, 11 on the road and all against contenders.

But perhaps this stretch of games should be considered more of a well-timed opportunity to regain lost ground than just a stern challenge. Because at the moment, there are few teams in baseball hotter than the Sox.

David Ortiz hit two long home runs and drove in four runs as the Sox thumped the Tigers, 7-2, at Park. They have won four of five and eight of 11, just in time for devastated Bruins fans to have something to pay attention to.

As the Sox heat up, Ortiz is again becoming a hitter to fear. His first homer was a three-run shot in the first inning that landed 450 feet away on the concourse that overlooks center field.

The second was a solo blast deep into the right-field stands.

Manager Terry Francona has been using Ortiz in a platoon with Mike Lowell at designated hitter, starting him against righthanders. But Francona said he would “probably’’ use Ortiz against Tigers lefty Dontrelle Willis tonight.

“I don’t want to get in the way of getting him hot,’’ Francona said.

In April, when Ortiz’s batting average plunged as he waved helplessly at fastballs, Francona resisted calls to bench the slugger in the belief he would turn it around. That process is well underway.

“If you get impatient you’re going to make mistakes. We need him to do what he’s doing now,’’ Francona said. “By running away from him, I don’t think that works.’’

Francona’s loyalty paid off in the first inning. Marco Scutaro started the game with a single to center. Pedroia followed with a home run to left, a blast that kept carrying and led to rookie Brennan Boesch running full speed into the fence as he watched the ball sail over his head.

Scherzer walked Kevin Youkilis with one out before J.D. Drew grounded a single into left field.

Scherzer fell behind Ortiz, 3 and 0, before throwing a fastball that Ortiz fouled off. Scherzer’s next pitch was a fastball on the inside corner and Ortiz swung again. The ball landed in the vicinity of Bookies Bar & Grille, a location where fans would not normally expect to tussle for a souvenir.

“I’ve never hit a ball that far in my life,’’ Pedroia said of Ortiz’s homer.

The second home run, in the fourth, was just shy of 400 feet. It was the 36th time Ortiz has hit two or more home runs in a game, the 34th time with the Red Sox. Only Hall of Famers Ted Williams (37) and Jim Rice (35) have accomplished that feat more often with the team.

Ortiz has hit five home runs and driven in 11 runs in nine games this month. He has six home runs on the season, a number he did not reach last season until June 21.

“He makes everyone else’s job easier,’’ Pedroia said. “The guys in front of him get on base and David can put three or four runs on the board in a hurry.’’

Sox starter Clay Buchholz allowed nine earned runs on 17 hits and eight walks in his two previous starts, which covered 10 2/3 innings. The 5-0 lead handed to him was an invitation to throw strikes and enjoy a drama-free start.

But rarely is it that simple for Buchholz.

He walked two of the first three batters he faced, Austin Jackson and Magglio Ordonez. Then with two outs, Buchholz threw a low changeup that Boesch dropped into center field for an RBI single.

Buchholz escaped further damage by getting Brandon Inge to ground into a force play.

“In my head I was trying to throw strikes and it didn’t work out that way,’’ Buchholz said.

But Buchholz (4-3) was fine after that. He pitched effectively into the seventh, allowing one run on three hits. He walked five and struck out three, and at one point retired eight Tigers in a row.

A single, a wild pitch, his own throwing error, and a sacrifice fly led to Daniel Bard allowing a run in the eighth. But the Sox got that back when Bill Hall homered in the ninth.

“I just chipped in a little. David did all the work,’’ Hall said. “We look like a different team when he does that, don’t we?’’