THIS STORY HAS BEEN FORMATTED FOR EASY PRINTING
Yankees 10, Red Sox 3

Beckett gets battered by Yankees in opener 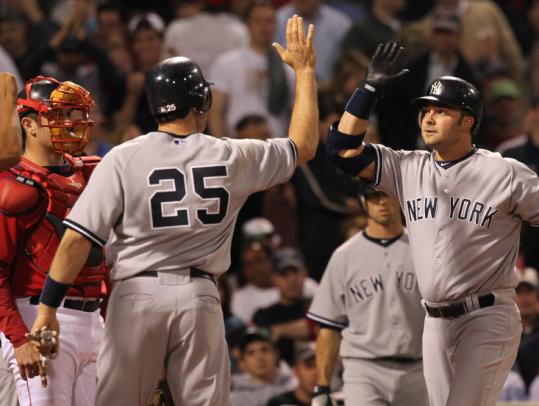 Mark Teixeira (25) greets Nick Swisher after Swisher got the Yankees going with a three-run homer in the fourth. (Matthew J. Lee/Globe Staff)
By Amalie Benjamin Globe Staff / May 8, 2010

As his starting pitcher fell apart in the sixth inning — four hits, two walks (one intentional), two hit batters, and a whopping six runs — the manager remained in the dugout.

Terry Francona didn’t move as the Yankees moved up 90 feet at a time. By the end of the top of the sixth, one Yankee had been forced out of the game with a sore left knee (plunked by a pitch) and their captain had been drilled in the back, and yet Josh Beckett was the one who had sustained the beating.

It had started out so well, with Beckett striking out five of his first six batters, the Red Sox starter appearing to continue the momentum he gained in his last outing in Toronto. It hardly ended that way with the crowd of 37,898 donating their boos as Beckett walked off the mound in the sixth after allowing nine runs as the Yankees coasted to a 10-3 victory.

“He started out the game as good as we’ve seen him, probably better,’’ Francona said. “He established all his pitches for strikes, a lot of swings and misses on all his pitches. Threw his breaking ball, fastball down with really good life.

“Then we get to the part where he crosses up [Jason Varitek]. We have the open base. We walk the bases loaded, hoping for a double play, and four hitters later we’re trying to clean up the mess. It went south as fast as it could. As good as he was commanding, all of a sudden it was gone.’’

It was a strange scene, with Hideki Okajima warming up after much of the damage had been done, Beckett still in the game when he should have been removed. He had all sorts of difficulties, from the passed ball that smacked Varitek’s left arm, to the pair of hit batters (and another buzzed), to the game morphing from a two-run Yankee lead into a blowout.

The confusion was great. Was it a sudden loss of command? Why were all those pitches flying so close to the Yankees? What had just happened?

“The sixth inning was uncharacteristic,’’ pitching coach John Farrell said. “Someone who has typically well-above-average command, in a 3-1 game there’s certainly no intent in any one of those situations [to hit someone], but he lost his release point, yanked some cutters in to lefthanders, and a couple of two-seamers got away from him to the arm side.

Poof. His command had vanished, replaced with erratic pitches that didn’t go anywhere he wanted. Though, to some Yankees, it appeared Beckett was throwing right where he wanted.

Beckett began the inning by allowing a double to Alex Rodriguez. He hit Robinson Cano, smacking the second baseman on the inside of his left leg with a cringe-inducing sound. And though Cano made it to first base and watched a couple of pitches to Nick Swisher, he soon came out of the game — and could miss the rest of the series.

After a passed ball, Swisher struck out. The Sox walked Brett Gardner intentionally to load the bases, bringing up Francisco Cervelli. The catcher got buzzed, and then walked, bringing in Rodriguez. Randy Winn singled, scoring pinch runner Ramiro Pena. Derek Jeter was hit in the back, bringing home Gardner to make it 6-1.

That brought many of Jeter’s teammates to the top step of the dugout, an apparent indication that some Yankees thought the pitch had purpose.

“I can’t speak for what the Yankees thought, but again we’re in a game in a bases-loaded situation and trying to finish out an inning,’’ Farrell said. “That certainly is the last thing we’re intending to do.’’

There was still more to come, as Marcus Thames recorded an infield single to Marco Scutaro, who threw to third but couldn’t get the force out. Mark Teixeira singled, scoring Winn.

That was it for Beckett, who walked off the field a few batters too late, a few pitches too deep.

“I just had no idea where the ball was going,’’ Beckett said. “Hit Cano with a cutter, and then Jeter with the bases loaded with a sinker in. Trying to throw the ball too hard. Just trying to throw better pitches instead of worry about location, worrying about velocity.

“Just when you try to overthrow like that, your delivery gets all messed up. You’re not worried about execution. That’s what you should be worried about.’’

That’s not how Beckett started. Through the first two innings, he struck out five batters, three by a wicked curveball. He added another strikeout in the third. Then came the fourth, when Beckett allowed a three-run homer to Swisher, the ball rocketing into the center-field camera well.

But that was nothing compared with the sixth. Asked if Beckett could have been taken out sooner, Farrell said, “Some of the matchups we wanted to get through the top portion of the order. But then we had to get Oki to shut the inning off.’’

For the Sox, it was messy. It was ugly. It was the last thing the team needed after a bounce-back series sweep over the Angels, leaving the postgame clubhouse empty and silent. It was also right in line with what Beckett has done this season, having given up at least seven runs in three of his last four starts.

“It’s been inconsistent,’’ Farrell said of Beckett’s season. “He’s had some games where he’s pitched very well, very Josh Beckett-like, and some other games that haven’t quite gone the same way.’’

That’s quite clear, to all the fans filling Fenway Park, to those watching at home, to the pitcher himself.

“It’s very disappointing,’’ Beckett said. “Guys are going out there, playing their [rears] off. I’d like to be part of wins and not losses. Unfortunately I had my fair share of those.’’