THIS STORY HAS BEEN FORMATTED FOR EASY PRINTING
Red Sox 2, Blue Jays 1

Buchholz gets win — and ‘save’ 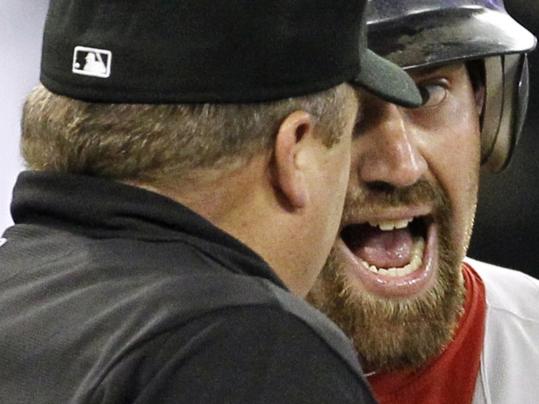 Kevin Youkilis has a word with Fieldin Culbreth after getting caught looking in the sixth inning. (Mark Blinch/Reuters)
By Amalie Benjamin Globe Staff / April 28, 2010

TORONTO — On a night in which desperation was evident in their transactions, the Red Sox (and their relievers) were saved by Clay Buchholz. They needed excellence and they also needed innings. They got both.

There was Buchholz, cruising through eight innings of last night’s game, having given up a single run. He was keeping the Sox in it against Shaun Marcum and the Blue Jays. He was proving the Red Sox wise for moving Tim Wakefield to the bullpen, and keeping Buchholz in the rotation. But, far more importantly, he was saving the Sox’ bullpen.

Before the game, manager Terry Francona ticked off the names of the unavailable relievers. There was Jonathan Papelbon and Daniel Bard and Hideki Okajima. None of them would see the mound. That left little wiggle room.

“That was a gutsy performance,’’ Francona said of Buchholz. “I think he threw 80 strikes tonight. The way their guy was throwing, there’s no room for error.’’

It took a career-high 117 pitches, but Buchholz was everything the Sox could have wanted in a 2-1 win in front of 14,776 at Rogers Centre, their sixth straight victory by one run. They needed only Ramon Ramirez out of the bullpen, the reliever getting his second career save and first with the Sox, as the rest of the pen got a chance to rest.

“I think Buch was huge. Huge, huge, huge,’’ Mike Lowell said. “Our bullpen’s been taxed a little bit the last couple days, so I think we needed that. I like the fact that he has a confidence. He’s always been willing to throw every pitch in any count, but I think [last night] it was strike one. It was big.

“I don’t think you can really say on any hitter it was this pattern. So when he throws strikes, the hitters are really guessing because he’s not like this power arm that’s just coming on fastballs and mixing in a slider here and there. He really has four good pitches. I’d say the key for him was throwing strikes, and he did. I don’t think we can undervalue how important his start was.’’

One night after Josh Beckett lasted just two batters into the fourth, Buchholz went eight. He was the ace that the ace hadn’t been, throwing a four-seamer on the inside corner to catch Lyle Overbay looking with a man on second and one out in a one-run game in the eighth, after an error by third baseman Adrian Beltre had helped put the runner in scoring position.

And that strikeout was particularly impressive, given the first baseman’s numbers. As Buchholz said after the game, “Overbay, that guy hits me better than anybody that I’ve ever faced.’’

He was correct. Entering yesterday’s game, Overbay had the highest average against Buchholz of any batter who had faced him at least 10 times, having gone 6 for 14 (.429). After walking Overbay in the first, Buchholz got him three times, ending with that strikeout looking. He then got Alex Gonzalez on a fly ball to get out of the eighth.

“There’s a thin line in between doing really good and really bad,’’ Buchholz said. “You’ve got to keep it all in perspective. I’m going to keep working as hard as I worked this week, harder, and try and get better.

“It’s a game of inches. If I make one bad pitch, they get a hit and the game’s tied and I’m coming out of the game with not a chance to win. I made a couple good pitches in a couple key situations. That’s just how the chips fell.’’

Of the 33 batters Buchholz faced in his eight innings, 23 saw first-pitch strikes.

After the Sox and Blue Jays produced enough offense for a full three-game series Monday alone, scoring 25 runs in a 13-12 Sox win, neither team could muster much with the bat. The zeros piled up on the scoreboard, with each pitcher holding the other club down — exactly what hadn’t happened the night before.

After Marcum exited, the Sox threatened in the eighth. And even that happened quietly, beginning against Scott Downs, as Dustin Pedroia and Victor Martinez both singled with one out. Kevin Youkilis lined to right, with Pedroia taking third, then J.D. Drew walked to load the bases, seemingly leaving it up to David Ortiz.

But Francona again pinch hit for the designated hitter in favor of Lowell, who faced reliever Kevin Gregg. He walked, on four pitches, giving the Sox the lead.

“I was consciously trying to look for a pitch to drive, almost like a 2-0, 3-1 count,’’ Lowell said. “That was my mentality. I don’t think it was a glorious at-bat or anything, but it worked out good.’’

Marcum held the Sox to that one early run, when they came through with two outs in the second. After Marcum struck out Youkilis (swinging) and Drew (looking), Ortiz walked. That was followed by a Beltre single and a Jeremy Hermida RBI single.

“To the lefties he threw his changeup real well, to the righties he was throwing that cutter,’’ Francona said. “He didn’t throw any pitches in the middle of the plate.’’

That tied the score, 1-1; the Blue Jays opened the game with a run in the first. Fred Lewis singled to lead off. After Buchholz was able to get two outs, Vernon Wells doubled in the run. But that was all for the Jays, who didn’t get another runner to third base.

The lack of offense was a far cry from the spectacle the previous night, with baseballs bouncing all around (and out of) Rogers Centre. That game was 4 hours 3 minutes. Last night’s was less than three hours.

“Isn’t that the way?’’ Francona said. “It’s a funny game. [Monday] night, we were thinking about onside kicks and field goals. And tonight, there’s not much to show for it. Except for a win.’’