THIS STORY HAS BEEN FORMATTED FOR EASY PRINTING
Red Sox 4, Orioles 3 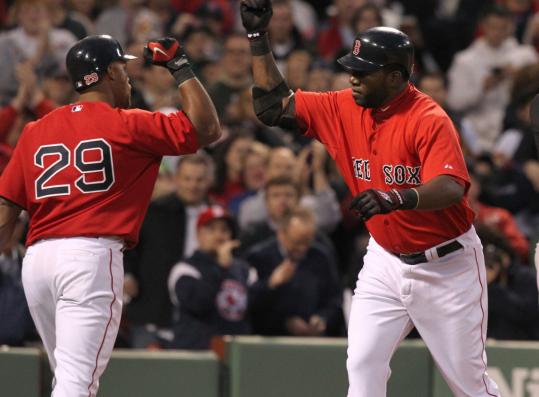 The Red Sox are still not playing especially well. But they have won three of four games since Dustin Pedroia accused his teammates of not always showing up ready to compete, the latest a 4-3 victory over the Baltimore Orioles last night.

That it took the notoriously impatient Adrian Beltre to draw a bases-loaded walk in the bottom of the eighth inning to beat the worst team in baseball isn’t the point. The Red Sox did what was needed.

“We’re finding a way to win,’’ Pedroia said. “That’s what good teams do. We’re doing the little things better. We lost some tough games early and we weren’t doing those things. Maybe if we had been, we would have won a couple of those games.’’

With J.D. Drew on third and two out, Baltimore relievers Will Ohman and Jim Johnson threw 12 of the next 13 pitches out of the strike zone to force in a run. Victor Martinez was intentionally walked before Ohman missed four times to David Ortiz.

Beltre, watching from the on-deck circle, took a lesson from Ortiz and told himself not to swing unless the pitch was up and irresistible.

“I was trying to be patient, something that I’m not really too good at,’’ said Beltre, who had walked only once in 59 plate appearances before last night. “But it worked out.’’

Beltre didn’t even swing. He took the first pitch from Johnson for a strike. The next pitch was outside, followed by three in a row inside.

“You can’t do that at the end of a game,’’ Johnson said. “I’m trying to throw the ball down the middle of the plate and it’s not going there.’’

It was the first time Beltre had walked twice in the same game in more than a year. But it was just enough for the Sox, who managed only six hits.

“It’s still not been real pretty. We’re making mistakes; we’re not making all the plays. But they’re not stopping playing,’’ manager Terry Francona said. “That’s a must. When things aren’t going your way, you’ve got to keep plugging. You can’t feel sorry for yourself.’’

It could be worse. The 2-15 Orioles have lost four straight and 13 of 14 to fall 11 games out of first place. Baltimore issued seven walks last night and left 12 men on base.

“We can’t worry about who we’re playing, it’s about us,’’ Martinez said. “If we keep playing hard, good things will happen. It’s a fight right now but it’s going to keep turning around. I think we’re getting close. The big thing is we’re fighting.’’

It wasn’t easy to finish off the win. With one out in the ninth, Jonathan Papelbon allowed a line drive off the wall by Nick Markakis. But Bill Hall, booed for a defensive miscue on Monday, threw Markakis out at second.

“It’s something I’ve been working on,’’ Hall said. “I’ve been out there for batting practice every day watching how the ball comes off the wall. It’s a good feeling when you make a throw like that. Only one thing is better for me, a home run.’’

After two walks, former Red Sox shortstop Julio Lugo struck out swinging. The Red Sox, who are still paying off the $36 million contract they signed Lugo to before the 2007 season, finally got a return on that investment. It was the fourth save for Papelbon.

The Red Sox had taken a 3-2 lead into the eighth inning but could not hold it. Matt Wieters led off the inning with a double to the gap in left. Manny Delcarmen (1-1) came in and walked Nolan Reimold, a .163 hitter, on four pitches.

A fielder’s choice moved Lugo, a pinch runner, to third. He scored when Adam Scott grounded to second.

Red Sox starter Jon Lester came into the game with an inflated earned run average of 8.44, the product of allowing 21 hits and nine walks along with two hit batters over 16 innings.

The poor start was a continuation of what Lester experienced early in the previous two seasons and has become a sticking point for the 26-year-old lefthander.

Lester wasn’t particularly sharp this time either, issuing four walks and hitting a batter over 5 2/3 innings. But the Orioles couldn’t do much with the strikes that he did throw as Lester did not allow a run and dropped his ERA to 2.22 in 13 career starts against Baltimore.

“He was terrific,’’ Martinez said. “He threw his cutter for strikes and he kept them off balance. It was a big improvement for him.’’

The Sox scratched for the offense off Orioles starter Jeremy Guthrie. Ortiz hit his first homer of the season, an opposite-field shot in the second inning. Drew had a sacrifice fly in the third inning and scored on a double-play grounder in the fifth.

Daniel Bard, who stopped a threat in the sixth, gave up a two-run homer to Adam Jones in the seventh.