No link to license for park, lawyers say at ethics hearing 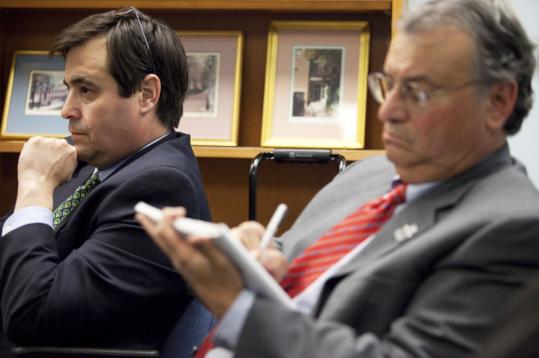 Former Red Sox general manager Dan Duquette was so touched by Pittsfield Mayor James Ruberto’s lifelong dream to take his father to a Sox World Series home game that he offered him two prime tickets to Game 2 in Fenway Park in 2004 — for face value.

That was the explanation attorneys for Ruberto and Duquette offered yesterday in a courtroom-style hearing by the State Ethics Commission on conflict of interest charges brought against the pair. At the time of the ticket sale, Duquette was negotiating with Ruberto and Pittsfield officials for a licensing agreement for his baseball club to play at the city’s Wahconah Park.

The commission accused the two of violating a state law against public officials being offered or accepting a valuable gratuity in exchange for an official act.

“His lifelong dream was to see the Boston Red Sox in a World Series here in Boston,’’ Duquette’s attorney, Anthony A. Froio, said of Ruberto.

Ruberto wrote Duquette a check for $380, or $190 per ticket, while resellers were getting $2,000 to $3,000 per ticket, a top executive from Ace Tickets, the ticket reselling company, testified yesterday.

At the time the Red Sox were completing a storied ending to an unbelievable season. In Game 2 of the Series against the St. Louis Cardinals, wounded ace Curt Schilling continued his dramatics by giving up only one run in six innings, and the team won 6-2. The Sox won the next two games in St. Louis for a four-game sweep and their first Series crown in 86 years.

Months after the exchange, the Berkshire Dukes, a summer league collegiate baseball team owned by Duquette, had a new home, thanks to a new licensing agreement with the city of Pittsfield to play at Wahconah Park, signed off by the mayor and other officials.

Ruberto’s attorney, Leonard H. Cohen, told the commission that the mayor did not let the Red Sox tickets influence negotiations with Duquette. Rather, Cohen said, the negotiations between the city and Duquette were at times contentious.

“It’s not like they climbed in bed together after the tickets were sold to make it happen,’’ Cohen said. “Mr. Roberto and the Parks Commission drove a hard bargain.’’

Another former Pittsfield official involved in the licensing agreement, James McGrath, who was director of community services, testified under questioning from Cohen that he was not pressured by anyone, including the mayor, to endorse Duquette’s proposal to have his team play at the city park.

At the time, Pittsfield had just lost a professional baseball team after hosting one for almost 80 years. Ruberto wanted another professional team to come to the city, his attorney said. Duquette, meanwhile, was looking for a bigger venue for the team than the former location in Hinsdale.

The two sides had on-again, off-again discussions. Then, two days before Game 2 of the World Series in late October, Duquette contacted the mayor, telling him he had two tickets for sale.

Froio, Duquette’s attorney, also told the Ethics Commission that his client “sold the tickets to the mayor for no other reason than to get rid of the tickets rather than waste them.’’

In a sworn statement Duquette had previously given the commission, the former Red Sox executive said he had no social relationship with Ruberto but decided to sell the tickets to the mayor because, “he was the most enthusiastic guy talking about the Red Sox,’’ according to a transcript of Duquette’s statement read by Ethics Commission staff counsel Candies Pruitt-Doncaster.

Froio said Duquette intended to foster good will with the mayor by selling him the tickets, but that didn’t mean that he was trying to influence the city official. Froio read from another portion of Duquette’s sworn statements in which he told investigators that he “never considered’’ selling the tickets at their market value.

“I’m not a ticket guy,’’ Duquette said. “To me, the worth of tickets are limited to their face value.’’ Duquette became a season ticket holder after leaving the Red Sox in 2002. Duquette no longer owns the baseball club.

Meanwhile, Matthew Freedman, director of purchasing for Ace Tickets, testified that demand for the World Series tickets was among the highest he’s ever seen. “It was pretty much off the charts,’’ Freedman said.

The hearing, in Boston, is expected to continue today.