Meet the Met: Bay is fitting right in 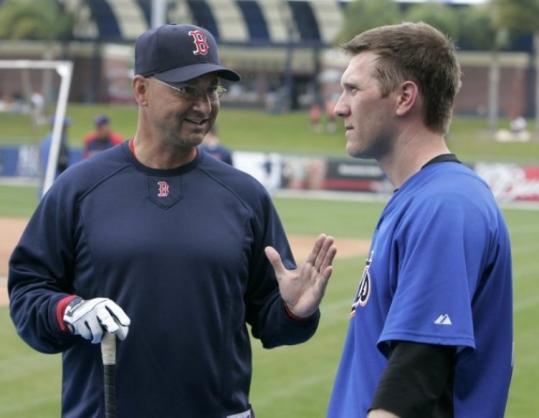 Red Sox manager Terry Francona had nothing but good things to say about Jason Bay yesterday, and the feeling was mutual. (Joe Skipper/Reuters)
By Amalie Benjamin Globe Staff / March 12, 2010

PORT ST. LUCIE, Fla. — Polite as always, Jason Bay made one thing clear as he sat down to talk to the Boston media: “If you’ve got any offseason questions, I’m done talking about it. I’ll talk about anything else, but health-related or anything like that, I’m taking the fifth. I’m trying to move on.’’

Far from brushing off the questioners, it appeared that Bay was simply stating a fact. He is done with Boston, ready for something new (though the cup of Dunkin’ Donuts coffee in his hand perhaps undermined his statement). He has said what he wanted to say, made his transition back to the National League with the Mets. Now, he believes, it’s time to look forward.

“Once I signed here, kind of got integrated a little bit, it’s been closed for me for a while,’’ Bay said. “I don’t really need the last goodbye. I’ve been traded numerous times. I’ve done a lot of this along the way. Boston just ended up being a stop along the way, albeit a very good one.’’

He didn’t even need the closure of seeing his former teammates, a surprising amount of whom actually made the long trip from Fort Myers for an 8-2 Sox win. They stood by him on the field, caught up. Though it was hardly necessary to see them for Bay to let go, those on both sides appreciated the interaction.

“He’s a very popular teammate,’’ manager Terry Francona said. “Just because he changed unis, it takes away nothing from what he did. The day he walked into our clubhouse, he was solid. He’s a good guy. The business side of the game doesn’t change how you feel about people.’’

His current stop, one that is likely to be a lengthy one, has already proven welcoming to Bay. There has been ribbing — for example, about the Dodge Journey he showed up driving. He smiles as he protests that the car at least has satellite radio.

No, even with the big new deal, the $66 million over four years, Bay did not see fit to rent a luxury car for spring training. He did, however, almost get caught with a serious bar tab.

Without mentioning it beforehand, Jeff Francoeur called a team meeting one day to say they were all going to a sports bar for the United States-Canada hockey game. Food and drink would be provided — by Bay if the US won, by Francoeur if Canada won, by Alex Cora if the sides were tied at the end of regulation. Oops.

“There’s only a minute left, I’m pulling for the Canadians,’’ Cora said. “All of a sudden Team USA scores. Man, it’s like everybody’s celebrating, they all start pointing at me. But between J-Bay and Francoeur, they picked it up. So I’m taking advantage of the situation.’’

That camaraderie, Cora said, “is something every team needs.’’

As is an offense. Bay should help the production of a Mets team that struggled with injuries last season, even though some say his swing won’t play as well in Citi Field. And without his bat in the Boston lineup, there have been worries that the Sox won’t score nearly enough runs. Bay nearly laughed at that suggestion.

“I think it’s ludicrous that everybody keeps talking about their offense,’’ Bay said. “I don’t really understand. It’s actually kind of baffling and almost funny to me that those guys over there have to keep answering offensive questions.

“How much offense are you looking for? I think they’ll be more than fine.’’

He, too, appears more than fine. He has settled in well, calling the transition seamless. Having already dealt with the scrutiny of Boston, playing for the Mets doesn’t seem all that tough.

“You go to a market like Boston or New York, any little unknown that you can cross off the list definitely helps,’’ he said, “and I think my time in Boston in more ways than one definitely set me up and prepared me well for this.’’

“He’s coming into another situation — we didn’t have a great year last year, everybody knows with the injuries and all that stuff,’’ said Cora. “He comes here and you see him walking around with his coffee, it seems like he’s been here for five, six years, and that’s great for us. That’s refreshing for us.’’