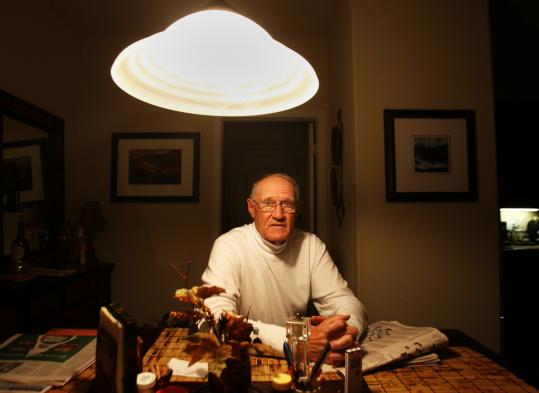 First in an occasional series on memorable Boston sports figures who had their 15 minutes of fame.

LONGMONT, Colo. - At 76, former Red Sox outfielder Carroll Hardy is in stellar health, but he knows his obituary is all but set in stone.

The only man ever to pinch hit for Ted Williams.

He’s been described as having the good fortune of Forrest Gump, and for good reason. Hardy also played one year in the NFL and caught four touchdown passes from Hall of Fame quarterback Y.A. Tittle. He pinch hit for a young Yaz and a rookie Roger Maris. He was tutored by the legendary Tris Speaker, coached for the volatile Billy Martin in Triple A Denver, and hit a walkoff grand slam at Fenway Park. He was even responsible for a change in the NFL draft.

Hardy was a journeyman outfielder for the Red Sox, Indians, Colt .45s, and Twins who hit just .225 with 17 home runs and 113 RBIs in 433 games over an eight-year major league career.

But he received baseball immortality on Sept. 20, 1960, in the first inning of a game in Baltimore.

“Skinny Brown was pitching this particular day. He threw knuckleballs. He could make ’em dance,’’ says Hardy, moving his fingers up and down as if he was playing a clarinet.

“Ted fouled the first pitch off his instep,’’ Hardy recalls. “It hurt him so badly he just limped off the field. He didn’t even stop in the dugout. He just headed straight for the clubhouse. Oh, he was really hurting. He had a foul mouth, no question about it.’’

Hardy laughs heartily, looking out his window at the Rocky Mountains. “The manager, Pinky Higgins, said, ‘Hardy, get a bat, you’re the hitter.’ I didn’t have any forewarning or nothing. So I grabbed a bat, hit into a double play, and no one thought anything about it.’’

He shrugs. “I knew I pinch hit for him, but I didn’t know it was a big deal,’’ he says. “It was just another at-bat. I never thought about it, nobody did.’’

But a Boston sportswriter later discovered that no one had ever hit for the Splendid Splinter, perhaps the greatest hitter of all time and the last man to bat .400. Hardy would forever be the answer to a trivia question.

Celebrity status
The attention Hardy received intensified after Williams died in 2002. “I started getting people sending me a lot of balls asking me to sign ’em ‘Carroll Hardy - the only man ever to pinch hit for Ted Williams, Sept 20, 1960’ and I do it for them.’’

He says the neighbors now know who he is. “They say, ‘My God, we didn’t know we were living next to a celebrity.’ ’’

Hardy says people want more details of the at-bat, but “I didn’t remember what I did. Somebody said I bunted, but I don’t think so. I wouldn’t have bunted with Brooks Robinson playing third base.’’

For the record, he lined out to the pitcher, who doubled the runner off first.

Hardy is just happy to be remembered. “I wouldn’t be anybody without Ted,’’ he says.

“When he came down into the dugout, I said, ‘Ted get up, get up’ but no, he wouldn’t do it. I think he should have, but he always said, ‘They boo you when you mess up and they cheer you when you hit. You don’t owe ’em anything.’ ’’

Before the ninth inning, Higgins approached Hardy and whispered, because Williams was within earshot. “He said he was going to let Ted run out to left field, then have me replace him. See if he would tip his cap. Ted was steaming. He didn’t want to go back out.’’

In 1961, Hardy pinch hit three times for another future Hall of Famer, Carl Yastrzemski. He doubled twice. “Yaz was a rookie, and early on he had trouble with lefties,’’ says Hardy. “But he figured it out.’’

After several years in Triple A, Hardy returned to the majors with the Minnesota Twins in 1967. He was on deck to pinch hit for pitcher Mudcat Grant when Rich Rollins popped out to Rico Petrocelli for the final out, giving the Red Sox the 1967 pennant and sending the Twins home empty-handed.

“I knew there were problems when the Twins were arguing about dividing up the money before the game,’’ he says.

After baseball, he returned to his football roots. He spent 20 years with the Denver Broncos front office as a player personnel executive. He helped build the famous Orange Crush defense, and has a diamond-studded championship ring to show for it.

Among the items in his trophy room is a signed Sports Illustrated cover (Oct. 13, 1986) of quarterback John Elway.

“Thanks for all your mental support - John Elway’’ is scribbled in ink.

“He and Dan Reeves didn’t get along,’’ says Hardy. “He was practically in tears, and I’d pump him up and say, ‘You’re gonna be there. Keep throwing the damn ball.’ ’’

Well-rounded athlete
So who is this guy who keeps turning up as a footnote in sports history?

Carroll Hardy was raised in Sturgis, S.D., near the . He won a state basketball title in high school and was the state broad jump champion. He’s in the South Dakota Hall of Fame.

At the University of Colorado, he earned 10 letters and made the Colorado Hall of Fame. The St. Louis Cardinals wanted him. So did the 49ers, who scouted him when he was MVP of the Hula Bowl.

He was taking his finals in 1955 when his professor got an urgent message.

“They said, ‘You’re wanted on the telephone right now. The 49ers are waiting to find out if you’re going to play football or baseball.’ ’’

Despite holding up the entire draft - and giving them a wishy-washy answer - the 49ers selected Hardy in the third round. Former NFL commissioner Pete Rozelle later told him he’s the reason the NFL instituted the current time limit on draft picks.

Hardy would play both sports that year. He signed with the Cleveland Indians and played for their farm team in Reading, Pa. A young Roger Maris was one of his teammates. The two Dakota boys hung out together.

He reported to 49ers camp on Aug. 15, and began the season as the team’s starting halfback because of an injury to Hall of Famer Hugh McElhenny.

The 6-foot, 190-pound Hardy was later moved to wide receiver where he caught 12 passes from Tittle, including one for 78 yards, the team’s longest catch from scrimmage for seven years.

“I loved football but I figured I’d eventually get hurt, especially as a receiver,’’ he says.

So he devoted himself to baseball.

Monster mash
Hardy says the greatest moment of his career was the 12th-inning, walkoff grand slam against the Indians April 11, 1962. Even then, he never got his due. On a raw day, there were just 2,466 fans at the beginning of the game, only a handful at the end. Bill Monbouquette was locked in a scoreless pitching duel with Ron Taylor.

Yaz had tripled to start the 12th and Cleveland intentionally walked the next two hitters to get to Hardy, who smacked the ball over the Green Monster.

“They were all waiting at home plate,’’ Hardy remembers. “It was mostly handshakes back then. They didn’t pound on your helmet like they do now.’’

He returned to Fenway Park for an old-timers’ day game in 1986, and teased Williams about pinch-hitting for him.

“He took it in good spirits. He said, ‘That’s not going to happen. They’ve got you playing center field.’ ’’

Hardy says he’d love to return to Fenway Park for the 50th anniversary of the pinch hit Sept. 20. The Sox are home against the same opponent that day: Baltimore.

“That would be fun,’’ he said. “Oh, I’d love that. That’s my favorite ballpark. I never thought I’d be a hero for being the only guy to hit for Ted Williams.’’