THIS STORY HAS BEEN FORMATTED FOR EASY PRINTING
GM meetings notebook

There are plays to be made 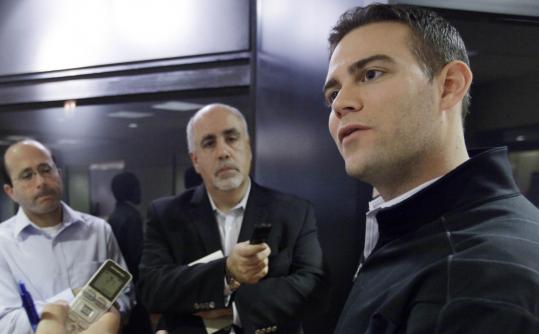 Sox general manager Theo Epstein (right) says, “I think we have a lot to do. But I’m not so sure there are obvious ways to do it.’’ (M. Spencer Green/Associated Press
)
By Peter Abraham Globe Staff / November 11, 2009

CHICAGO - On the surface, the Red Sox would seem only to lack a left fielder and a shortstop to be ready for the 2010 season. Once those spots are filled, only some minor roster tweaks would remain.

It’s easy to forget, given the three-game sweep at the hands of the Los Angeles Angels in the Division Series, but the Red Sox won 95 games and scored the third-most runs in the game. Only the Yankees had a higher OPS.

“You can’t call any season a success unless you’ve won the World Series,’’ said general manager Theo Epstein. “But at the same time, I think people get too carried away in judging where you are as a franchise based on what happened in October.

“We had three bad games. We didn’t perform well in October. But we met a lot of our regular-season goals this year and [had] the type of club we want to build.’’

“They could have a very slow offseason in some ways,’’ he said.

But during a break in the general managers’ meetings, Epstein sounded eager for the unexpected.

“I think we have a lot to do,’’ he said. “But I’m not so sure there are obvious ways to do it. So we’re going to have to explore creative ways to get better.’’

The opportunity is there for this offseason to become a significant one. The Red Sox have the young, affordable players other teams covet and the ability to expand their payroll under the right circumstances. Given the shallow free agent market, the Sox could seek change via trade.

“I don’t think we can just show up next year with a largely status quo situation and have the exact same club,’’ Epstein said. “It’s an interesting offseason because there aren’t a lot of obvious ways to improve.

“Every dollar counts. Hopefully we’ll sign Jason Bay. But if we can’t, we’ll have to get creative in left field. It could a big-money guy, it could mean a couple of lesser investments; it could mean we try to get better at a different position.’’

As GMs try to leverage their positions, they speak of trading star players in unlikely terms. Hoyer said he was under no pressure to move first baseman Adrian Gonzalez and new Toronto GM Alex Anthopoulos said it would require “elite’’ talent to deal Roy Halladay.

But big deals have a way of suddenly happening (remember Nomar Garciaparra?). Epstein said he has the wherewithal to expand the payroll under the right circumstances.

“For a player that’s so impactful that he changes both the short-term outlook and the long-term outlook, I think generally we have the ability to do what we want to do,’’ he said. “Ownership is always completely committed and we have a lot of resources.’’

For now, the Red Sox attend to internal matters. Catcher Jason Varitek has until today to inform the team whether he will exercise his $3 million option. Epstein had a meeting scheduled with agent Scott Boras last night to discuss that.

“I know Jason well enough not to speculate on what Jason wants,’’ said Boras. “I think that’s just something he’s going to have to let me know.’’

Boras could try to renegotiate the option, an idea Epstein found less than thrilling.

“We can always sit down,’’ he said. “But it seems like a straightforward thing.’’

No change seen
The GMs did not push for an expansion of instant replay during a lengthy meeting with officials from Major League Baseball. Replay is used now only to determine the validity of home runs. Executive vice president Jimmie Lee Solomon said he was not surprised, given that commissioner Bud Selig is opposed to further use of replay. Any change would have to be mandated by the owners . . . Daisuke Matsuzaka will return to the United States earlier this offseason and is seeking a workout facility. “He’s going to spend more time in the States than he has in the past,’’ Epstein said. “Starting earlier than he has in the past will help his conditioning. He has his throwing program mapped out and it’s a really sensible one. It should put him in a really strong position in spring training.’’ . . . The Sox were shut out of the Gold Gloves. Dustin Pedroia, the winner at second base a year ago, was beaten out by Detroit’s Placido Polanco . . . Epstein spoke in glowing terms about Jose Iglesias, the 18-year-old Cuban shortstop signed by the team in July. He is hoping to see Iglesias play in person before the close of the Arizona Fall League . . . Area scout John Booher, who signed Jacoby Ellsbury, left the organization to become a pro scout for the Rangers.