Epstein’s stable has another winner 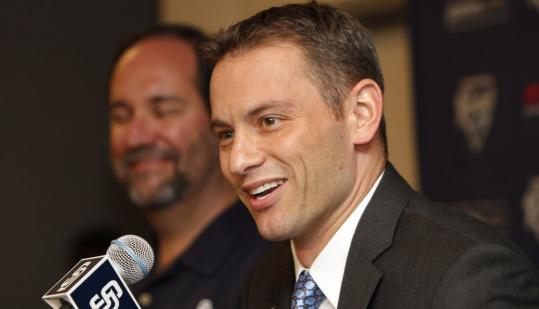 Thanks to a long-term contract from owner Jeff Moorad (left) and a well-stocked farm system, Jed Hoyer had plenty to smile about when he was introduced to the media as the Padres’ GM. (Lenny Igneizi/Associated Press
)
By Nick Cafardo Globe Staff / October 27, 2009

SAN DIEGO - Jed Hoyer, the new general manager of the San Diego Padres, said all the right things during his introductory news conference yesterday, but he fell short of saying what Red Sox fans wanted to hear - that he would trade superstar Adrian Gonzalez to Boston.

The 35-year-old Hoyer’s biggest asset as he takes over a team with a $40 million payroll, about $100 million less than he had in Boston as an assistant to Sox GM Theo Epstein since the end of the 2003 season, is Gonzalez. He could bring a small fortune in prospects, and Hoyer probably has a willing trade partner in his former boss. One wonders how much the two already have talked about a deal for the lefthanded-hitting first baseman.

Hoyer said he was quite familiar with the Padres’ personnel, having studied the team inside and out for his discussions with new owner Jeff Moorad, which Hoyer said began in mid-September. Asked if he would participate in trade talks at the general managers meetings in Chicago and the winter meetings in Indianapolis, he said that after he gets input from the staff he inherited, which includes manager Bud Black, he would have a better idea what he had to trade.

Hoyer always has been a fan of Gonzalez and has noted that he would be a great fit for Fenway Park because he hits the ball the other way with power.

Wearing the other hat yesterday, Hoyer emphasized that he wants to build a team that’s best-suited for spacious Petco Park, which means building pitching and defense. Does Gonzalez fit what Hoyer would be trying to do?

“What is there not to be thrilled about [with Gonzalez]?’’ Hoyer said. “This guy is one of the best run producers in baseball. It’s a wonderful situation to be in. He’s such a great player. He’s got a great contract, but there are some decisions that we need to make in the coming weeks. It’s [a possible long-term deal for Gonzalez] definitely on the docket.’’

As far as trying to make a deal with Epstein, Hoyer said, “I think it would be fun. Whether we make a deal or not, I don’t know. I’ve been in the room on countless negotiations with him so I think we have a pretty good idea of how each other operates. But there are 29 teams to work out deals with. Whether it’s immediate or down the road, I’m sure we’ll find each other on the phone together. It will be an interesting experience. I think we know each other’s tricks a little bit.’’

Hoyer praised his predecessor, Kevin Towers, the GM the previous 14 years, for the shape he left the organization in, and he mentioned that Towers left him a nice note in his desk. Hoyer also was generous with praise for the people he’s leaving behind - Epstein, Larry Lucchino, John Henry, and Tom Werner - and those he’s about to work for, namely Moorad, who for the second time plucked a GM from the Epstein/Boston tree. When he was in Arizona he secured the services of Josh Byrnes.

Hoyer said he hopes to build in San Diego what Epstein promised he was going to build when he first took the Sox job - a “scouting and player development machine.’’ He’ll do it with that inherited staff, but there are strong hints that Hoyer will get to surround himself with some people he knows.

Hoyer said he thinks a great part of the Red Sox’ success was tailoring their players to their park. He believes it’s important for a team to be dominant at home and then hold its own on the road. “My goal is to build a consistent winner year in and year out for the city of San Diego,’’ he said. “I’m incredibly lucky to inherit such a core of good young talent and a very talented farm system. My goal here is to continue to build on the momentum that’s already been created.’’

Yet he’ll have to do it the hard way, via player development and likely with very infrequent free agent signings.

“What always bothered me about the Red Sox situation is so few people gave us credit for building that team with our player development and scouting,’’ he said. “I think people have mistaken a big payroll for going out and buying players. We developed our players and it’s something we were very proud of.’’

Yet the money came in handy when filling a need the farm system couldn’t.

“[With] a middle-market team, it’s harder to retain your own players,’’ he said. “I think in a big market when you have a talented player and it’s getting closer to free agency it’s easier to make that big deal to keep him.

“The difference having a smaller payroll is you can’t recover from that bad financial mistake. In a place like Boston it’s a little bit easier to paper over it. If you make a mistake on a player it’s easier to figure out a solution. You have to be more careful with those kinds of decisions.

“It’s different, but I still think a lot of it is built the same way.’’

Hoyer, who received a long-term deal (although perhaps not the eight-year contract Moorad gave Byrnes in Arizona), said he had looked at other situations for his first GM job, and said San Diego easily was the best job he has come across.

“I think it’s a wonderful situation here,’’ he said. “I think all of the contracts are really good. Chris Young and Adrian Gonzalez and David Eckstein have the bigger deals, and there isn’t a lot of guaranteed money. It’s a great situation.’’

Hoyer, who played baseball at Wesleyan, was presented with a No. 11 Padres jersey, his collegiate number. He spoke about his time as an intern under Epstein and the stories of working until 4 a.m. in the Fenway offices. He praised Epstein for allowing him to get involved in all aspects of the organization and said he would not be the last to earn a GM job from the Epstein tree.

With 40 years in the books and no championship in San Diego, Hoyer was asked when could he guarantee one?