It was a striking performance from Weaver 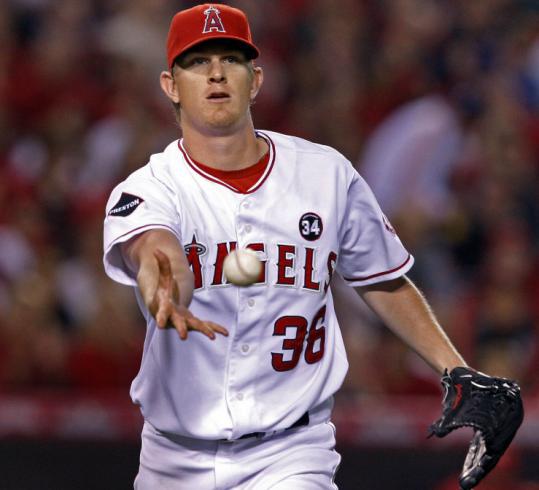 ANAHEIM, Calif. - Jered Weaver had the tough duty of starting for the Angels April 10, the first game following the death of his teammate and close friend Nick Adenhart at the hands of a drunk driver.

He pitched magnificently into the seventh inning, holding the Red Sox to one run in an emotional victory at Angel Stadium.

Six months later, in the same stadium and against the same opponent, Weaver was even better, as the righthander put the Red Sox on a precipice of postseason elimination.

Weaver allowed one run on two hits over 7 1/3 innings as Los Angeles beat Boston, 4-1, in Game 2 of the American League Division Series to take a commanding 2-0 lead in the best-of-five series.

“That right there was probably the best game I’ve ever pitched given everything that was at stake,’’ said Weaver, who struck out seven and walked two. “To leave home with two wins is huge for us.’’

The 27-year-old Weaver threw 68 of his 111 pitches for strikes, mixing pinpoint fastball command with a tight slider that he wasn’t afraid to throw behind in the count.

“He wasn’t pitching out of the stretch very much,’’ Red Sox manager Terry Francona said. “He throws across his body with deception. We talked about that before the game. He executed his pitches and it looked like we started trying to pull a little too much.’’

The only run Weaver allowed came in the fourth inning when Jacoby Ellsbury tripled to center field and scored on a single to center by Victor Martinez.

Weaver had been perfect before the triple, retiring the first nine batters. After Martinez’s single, Weaver was nearly perfect again, as Boston did not get another hit off him.

“Any time you can get ahead of those guys and try and make them chase late in the count, that’s locating pitches,’’ Weaver said. “The slider was a lot sharper than it has been towards the ends of the year.’’

J.D. Drew worked a two-out walk in the fifth but Weaver struck out Alex Gonzalez to end the inning. The light-hitting shortstop got ahead, 3-1, in the count then swung and missed at two fastballs.

Jason Bay walked with two outs in the seventh. But Mike Lowell chased the first pitch he saw, a cut fastball in the upper half of the strike zone, and flew to center field.

“I thought Weave did a really good job of staying focused [and] settling down,’’ Angels manager Mike Scioscia said. “They didn’t bunch too many of their hits together and that’s a tribute to the way Jered pitched tonight.’’

After Weaver struck out Drew to start the eighth, Scioscia took him out. Weaver tipped his cap to the cheering crowd then pointed his glove in the direction of where his parents were sitting behind home plate.

“Being able to do that in front of them was pretty special,’’ Weaver said.

Going back to Game 3 of the 2008 Division Series, when he pitched in relief, Weaver has held Boston to one run on three hits over 9 1/3 innings. If he pitches again in this series, it would likely be only in relief. Los Angeles will use Scott Kazmir in Game 3 at Fenway Park tomorrow, and Joe Saunders if Game 4 is needed Monday.

Game 1 starter John Lackey would be the likely choice if the series returns to Angel Stadium.

“I hope I can just watch the rest of this series and we can get the third win,’’ Weaver said. “It’s not over, but we took two big steps.’’