For Yankees, the best days are still ahead 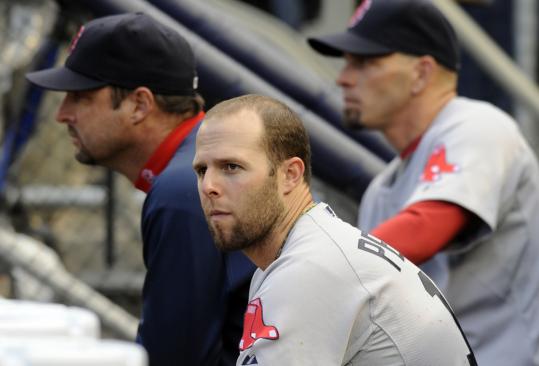 After the Dustin Pedroia and the Red Sox were swept by the Yankees, they watched them celebrate winning their AL East title. (Henny Ray Abrams/Associated Press)
By Nick Cafardo September 28, 2009

NEW YORK - Forget about the Yankees having “made a statement’’ or that their American League East championship means more because they clinched it by sweeping the Red Sox at home. Forget about the Sox not putting up much of a fight over the weekend and why they looked more like a team that had clinched something than the team that actually did. Not sure we’ll ever get an explanation for that one.

This was about the Yankees and their extraordinary regular season.

After a 4-2 win over Boston yesterday, the Yankees, who didn’t make the playoffs last season, celebrated like it was 1999. The champagne flowed, young players and veterans alike spraying bubbly.

After going through the usual trials and tribulations of being a Yankee, they decided they were going pat one another on the back for a job well done. The feats to date: 100 wins, the AL East title, and home-field advantage in the playoffs all rolled into one. An excessive celebration? To the outsider, sure. To the people who dominated their division and kept their eyes squarely on the ball, not excessive at all.

“We’re just going to take a few minutes here to celebrate, to be proud of what we’ve done,’’ said winning pitcher Andy Pettitte. “I know how hard it is to win a division and to win this many games. I know how hard it’s going to be from here on out. But after this hour or two, this team is going to go back into the same focus that allowed this to happen. These guys worked so hard for this. They deserve this.’’

Pettitte, one of the old guard who left the Yankees for a few seasons, said, “I came back here for the chance to experience what I experienced earlier in my career here. This is why I came back.’’

Give the Yankees their due. They have been the best team. Their management identified, went after, and signed all the right players. Alex Rodriguez returned to a team in shambles in mid-April and turned it around - after undergoing hip surgery and after he admitted to taking performance-enhancing drugs earlier in his career with the Rangers.

“This was a unique year because I didn’t know if I was going to play baseball this year,’’ A-Rod said. “The fact I was able to play and contribute and that I was in the middle of this is great, but I was one of 25 guys who bought into [manager] Joe Girardi and who bought into the system. That’s been the key for this year.

“I just felt I was getting stronger every month. The staff came up with a good plan and gave me plenty of rest throughout the summer. I can’t lie, it’s been a hell of a tough year. But it’s so gratifying to be sitting here in this position as one of the guys.’’

Rodriguez, who could finish with 30 homers and 100 RBIs despite playing just 120 games, has never fit in with his teammates more than this season. It seems the team rallied around him after his steroids admission.

All of the other “old guys’’ like Derek Jeter, Jorge Posada, Johnny Damon, and Hideki Matsui, had huge years.

“We just wanted to be in this situation from the start of the year,’’ Posada said. “We wanted to get to this point - first step - the AL East title, and here we are. We know where we want to go. Those of us who have been there, we know how hard it is to get there. We have a lot of character, a lot of heart. We have great pitching and that really helps a lot. But I think we all know that this is a start, nothing more.’’

They impressed Reggie Jackson. Mr. October said, “This is a much better team than I’ve seen here [from 2004-08]. Last year, that was such a disappointment to everyone around here not making the playoffs. You know the guys, and management, tried their best so that wouldn’t happen again. But forget about expectations and pressure. You have to win on the field. You can carry yourself like a winner and act like a winner, but you have to win on the field. They’ve done that for the regular season, but these guys know they have to prove it again starting in October.’’

Damon, who won a championship with the Red Sox in 2004 after Boston’s incredible comeback against the Yankees in the ALCS, wants that feeling in reverse. Yet Damon, who got the day off yesterday, was front and center in celebrating an accomplishment in what might be his final year as a Yankee.

“It all starts with the Steinbrenners,’’ said Damon. “They knew we needed a starter like CC [Sabathia], and then they brought in A.J. [Burnett] and [Mark] Teixeira for our lineup, so those are the top free agents from last year’s class and we can see the difference of where we’re at. We celebrated a little bit today but we’ll be ready to play tomorrow.’’

Any special feeling because it came against the Sox? “No, they just happened to be the team we were playing at the time,’’ Damon said. “We know they’re a very good team - even though we finish with them this week, we know there’s a good chance we can meet them again. We know they’re good, so hopefully we can continue to play like we have been and hopefully start winning games in the postseason.’’

Girardi, who many felt might get fired if he missed the playoffs a second straight season, met with the team right after the win. He relayed what he told the players: “I’m very proud of what they accomplished and they should be proud of themselves. I told them to enjoy the day and the celebration because we have a lot of work to do in the coming days.’’

The Yankees got the job done on the field over the weekend. The Red Sox didn’t.

“That’s a really good team,’’ said Pettitte. “It was back and forth all year. It’s never gonna be easy against them.’’

Can Pettitte be the winner he’s always been in the playoffs based on his recent shoulder problems?

“All I know is I felt good in Anaheim and I felt good today,’’ he said. “I’m gonna give it everything I have every time I go out there. That much I know.’’

Jeter, Posada, Pettitte, and Mariano Rivera echoed this Damon comment: “Absolutely, it’s disappointing if we don’t win a world title. That’s everything we’re shooting for. We’ve accomplished everything we can to this point, but we have to win playoff games. That’s the bottom line now. Anything else would be unsatisfactory to us.’’

“The journey has just begun,’’ said Jeter, who is hitting .333. “I’m glad we’re celebrating what we’ve accomplished to this point. I also know how much the guys on this team want to go as far as they can possibly go.’’