THIS STORY HAS BEEN FORMATTED FOR EASY PRINTING
Red Sox 9, Rays 1

Beckett pours it back on 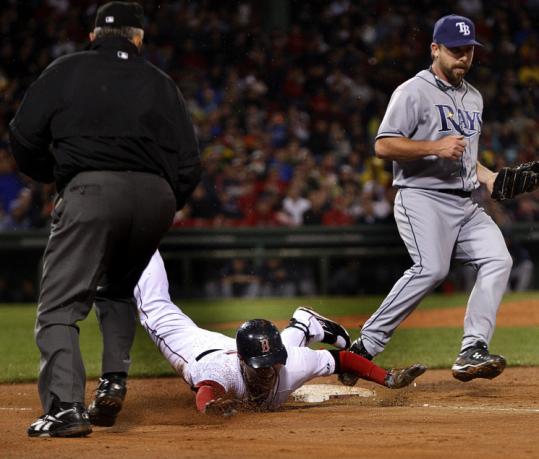 Dustin Pedroia gets down and dirty in making the last out of the third, but the damage had already been done (eight runs). (Barry Chin/Globe Staff)
By Amalie Benjamin Globe Staff / September 13, 2009

The curse came in the form of a giant white tarp, the one that spent most of the day on the field, and the one that mercifully ended the game early as the rain poured down.

That, of course, came after the Red Sox poured it on, making Tampa Bay, a team that had once been a favorite to make the postseason, look like a team ready for golf games in October.

But, more than that, the brief window of clear weather provided the Sox with a new look at their top arm. This was the Josh Beckett they were waiting for, the Josh Beckett who had dominated through May and June and July.

He was back, and just in time.

With the Sox’ 9-1 win last night, a rain-shortened game that ended one batter into the sixth inning, Beckett won his 15th game - on his sixth try.

It was a complete game, though he threw just five innings, leading to this gem from the ace: “As Curt Schilling would say, ‘It’s the only time you can throw five innings without feeling like you kissed your sister.’ ’’

“It’s nice,’’ Beckett said. “That’s what I feel like I should do every time I start. Obviously that’s not going to happen. There are certain things that are out of my control. It’s just a process, one pitch at a time, one game at a time. You can’t get too far ahead and you can’t look too far behind.’’

The decision was the ninth straight loss for the Rays. And though the Sox wouldn’t know the outcome of a rain-delayed game between Seattle and Texas by the time they left the park, the Mariners did complete their end of the bargain with an 8-3 victory, bumping the Sox’ wild-card lead to three games.

The Mariners’ win completed a day of positives for the Sox: their win over Tampa Bay, the improved performance by Beckett, the ability not to tax their bullpen before a doubleheader.

“From our standpoint, it was a long day, but it was a productive day,’’ manager Terry Francona said. “What we set out to do, we accomplished. We won. Lot of waiting around, both sides.’’

Before it all started? That was a little odd. It was like a dance, a crazy, mixed-up, absurd dance. With barely any rain coming down for the first hour of a rain delay that pushed back the 7 p.m. start, the grounds crew determined it was time to remove the tarp at exactly the moment when the precipitation came the hardest. The tarp didn’t even make it to the rolled-up stage before it was back on the diamond. The rain stopped. Beckett was out in right field stretching, then he came off. Then he went back out.

“It wasn’t that tough today,’’ Beckett said. “There was a different football game on every TV that you walked by. We stayed pretty busy in there. I feel like I’ve been through those situations enough to where I know that I can’t expend a lot of energy worrying about when the game’s going to start. They’re going to let me know. They always give us enough time.’’

All was clear, though, as the first pitch was thrown at exactly 9:15. Beckett needed just seven more to get through a 1-2-3 first. It was a harbinger of what was to come, with the Rays not recording their first hit until the third inning. And before the Rays could get another, the Red Sox had put up eight runs in the third inning, as every starter other than Jason Varitek got a hit, and every starter other than Varitek and Jacoby Ellsbury scored a run.

So, while Tampa Bay’s Wade Davis was looking awfully like a rookie, as he lasted just eight outs, Beckett was doing his best to win his first game in exactly a month. In the interim, Beckett had been awful, allowing 28 runs over five starts. He had started to get better, though, gaining in effectiveness over his last two starts.

Everything looked different last night. Whether it had been the long wait or just a return to his brilliant performances of the middle of the season, Beckett looked as if he is rounding into postseason form. (Over his career, Beckett has a 2.88 ERA in September, the best of any month.) He looked it last night, allowing just one run on four hits, one walk, and one hit by pitch, while striking out four.

Davis surrendered five singles, then walked one unintentionally and one intentionally to find himself with the bases loaded and four runs in. Then up stepped Alex Gonzalez, who dumped a pitch into left-center, clearing the bases with his double. He scored on Ellsbury’s single, and that was it. Eight runs in.

“We took some good swings, we got some fastballs up,’’ Francona said. “He’s got a chance to be pretty good, but he made some mistakes out over the plate, and Gonzie came up with a huge hit, as he seems to have a knack for doing.’’

Though Beckett let up slightly in the fifth, allowing a single to Akinori Iwamura and hitting Dioner Navarro on the left foot before a run-scoring Wall single by Jason Bartlett, the lead - extended by a home run by Kevin Youkilis in the top of the inning - stood at eight through the now-increasing rain.

It seemed to be a race at this point, a race to make the game official. They got it in, then played another half-inning, plus one Evan Longoria double, before the grounds crew re-emerged and the game went into rain delay again at 10:59 p.m.

“It’s a hard decision,’’ Francona said, of the working with the weather. “That’s the one thing I’ve learned up here is you don’t know. You look at the radar and it’s green. Then it’s not raining at Fenway. You just do the best you can.’’