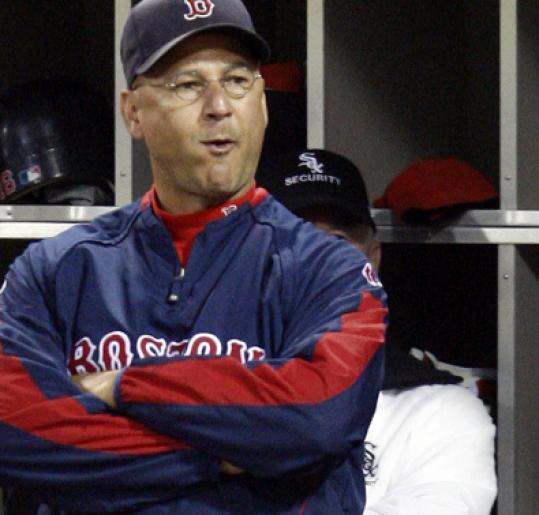 CHICAGO - Billy Wagner was sprawled out on the couch in the clubhouse in St. Petersburg, Fla., earlier this week sharing stories, when he turned to Daniel Bard, sitting on the adjacent chair, and tried to spin a yarn about Randy Myers. Problem was, in the year in question, Bard was just 10 years old. Wagner shook his head.

But the age difference - it’s 14 years - has hardly stopped Wagner from seeing a bit of his old self in the 24-year-old Bard.

“I think when you’ve got a lot of ability like he has, you tend to just go with what got you here and stuff,’’ Wagner said yesterday. “He’s picking the brains [of his teammates]. Right now his stuff is overpowering, everything he throws is overpowering. It’s not that he’s using everything that he hears, but I think he’s understanding there’ll be a time when you have to maybe pitch a different way or you can go out there and use your advantage, use your fastball as an advantage when you don’t throw it.

“I enjoy him out there. Wasn’t that long ago when I knew how he felt when he went out there. So you see that and his ability and he’s got a great work ethic. He’s got a high ceiling.’’

Wagner pointed out that at some time in Bard’s career, his breaking ball might be more of a weapon than even his fastball. Wagner said the fastball will be feared, given its ability to hit triple digits, and he “can have everybody expecting fastballs and throw three sliders.’’

To that end, it’s worth noting Bard’s slider has improved this season as he has worked to adjust his grip. He now throws the pitch as if he’s throwing a cut fastball, and gets the break he desires. Bard has thrown four scoreless innings in his last three outings, bouncing back from a difficult stretch.

“I kept experimenting with slider grips and they kept coming out like too much break, too much like a curveball, and I need something harder. So if the slider grip comes out like a curveball . . . It’s not a huge difference. It’s really just tinkering it, making it a little more like a fastball in your hand.’’

And people have taken notice, from Ozzie Guillen, the last time the White Sox and Red Sox met, to teammates like Wagner.

“What he’ll learn through time is when he doesn’t feel good, it’s still better than 95 percent of the rest of the guys that’ll be in his bullpen,’’ Wagner said. “He’s got a lot to learn, but he’s well on his way.’’

Wakefield back today
Instead of Junichi Tazawa facing the White Sox today, Tim Wakefield will return to the rotation after bouncing back well yesterday from the side session he threw Thursday in St. Petersburg, Fla. The Sox moved Tazawa to the bullpen, where he came on in relief of Paul Byrd last night.

“[Wakefield] threw the ball great, which we all knew,’’ manager Terry Francona said. “We just wanted to see how he would bounce back. If he threw and came in this morning, said, ‘Hey, you know what, this is not good,’ we wouldn’t do that. We all know what we’re dealing with. He might not be able to take the ball every five days, we know that. He knows that. But we’ll just kind of see how he does.’’

Wakefield last started against the White Sox Aug. 26, with his most recent outing before that July 8. In his last outing, Wakefield looked tremendous, allowing one run over seven innings. But after that start, the knuckleballer began to experience a recurrence of the back pain and leg weakness that had landed him on the disabled list after the All-Star Game. He was scratched from his next start, and received an injection of cortisone on Monday.

Victor Martinez will catch Wakefield today, as he did in the knuckleballer’s last start.

“Obviously it was the first day and I’m not going to talk too loud,’’ Martinez said. “It was a great outing by him, and obviously I did a decent job, so I’m really looking forward to having the same kind of confidence behind the plate tomorrow.’’

Bowden called up
With Tazawa coming in for 3 2/3 innings last night, the team called in a reinforcement from the minors. Michael Bowden was scheduled to pitch today for Triple A Pawtucket, but instead he will join the team in Chicago and will pitch long relief if needed . . . The Sox used 17 batters and 21 players last night. The last time the Sox used more batters (18) was Sept. 9, 2006 against the Royals. The last time they used more total players was Sept. 30, 2007 against Minnesota, when the team had already clinched their postseason spot . . . The loss was only the Sox’ third in their last 11 games . . . Boston allowed 20 hits, the third time this season it has given up 20 or more hits, the last coming Aug. 21 against the Yankees.
Lowell on bench
Mike Lowell again was not in the lineup, despite his .339 average since July 17, with Kevin Youkilis at third base and Martinez at first. “I think he’d like to play every day,’’ Francona said. “I think that’s his nature, which I respect. I think he’s allowed it to be good for him physically. Monitoring [his hip], he’s done a good job. I think it’s been good healthwise. His nature is kind of a grinder where he’ll figure out a way to go out and play regardless of how he feels and I understand that.’’ . . . Daisuke Matsuzaka threw 4 1/3 innings for Pawtucket last night, allowing two runs (solo homers) on four hits and one walk. He also had three strikeouts. He threw 67 pitches, 43 for strikes. If the Sox determine Matsuzaka is not ready to return to the major leagues, there is the possibility he could start a playoff game for a minor league affiliate, Greenville or Lowell . . . Tickets to the Josh Beckett and Friends Beckett Bowl after-party are available at Ticketmaster.com or by calling 1-800-745-3000. The event will feature a performance by country rocker Pat Green at the House of Blues, and will benefit the Josh Beckett Foundation. Tickets for the bowling event are $250 and for the after-party are $45.