In Tampa, roof caves in on Sox relievers 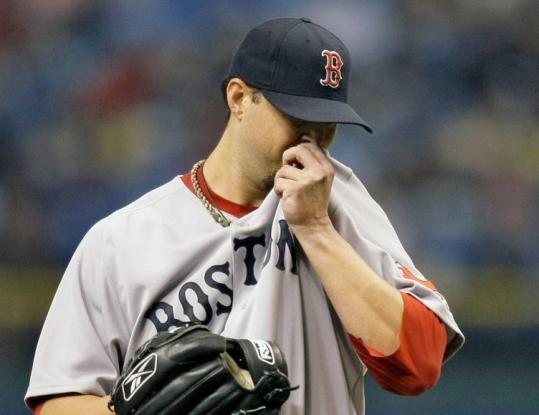 ST. PETERSBURG, Fla. - The bases were loaded. The dugout was filled with extra players, including Mike Lowell and Rocco Baldelli, and yet Alex Gonzalez strode to the plate with the Red Sox down a run in the eighth inning at Tropicana Field. Lefthander J.P. Howell, Tampa’s fourth pitcher of the inning, had just entered and prepared to deliver to a shortstop obtained for his glove, not his bat.

Sure, Gonzalez was hitting .393 in his last eight games. But two righthanded hitters with pop sat on the bench, with Lowell 3 for 4 in his career against Howell. It could have been the moment, the one in which the Sox broke open a game that had previously seemed to be spinning out of reach. But manager Terry Francona held.

And though the Sox scored the tying run, it was not because of anything they did. Instead, pinch runner Joey Gathright (in for David Ortiz) came home on a pitch that bounced in the dirt, off the right shoulder of catcher Gregg Zaun and away. But they would get no more, with Gonzalez and Jacoby Ellsbury striking out swinging. That was it, as the Rays turned things around in the bottom of the inning, beating the Sox’ bullpen with three runs in an 8-5 win in front of 19,148. That, combined with a Texas win, left the Sox with a 2 1/2-game lead in the wild-card race. The Rays are five games back.

Not that it ended there. Ramon Ramirez had gotten three quick outs in the seventh, as he led off for a shorthanded bullpen - neither Billy Wagner nor Jonathan Papelbon were available. But things changed for Ramirez in the eighth. Carlos Pena led off with a double and scored when Pat Burrell singled to right, giving the Rays the lead.

Manny Delcarmen relieved Ramirez, then Evan Longoria did what he has done so often against the Sox, blasting a mammoth home run to left for an 8-5 lead.

“Obviously we tied the score, and the way they responded to some fastballs that we threw, or some velocity-type pitches, hard slider, hard fastball, they were certainly geared up, particularly when they were elevated in the strike zone,’’ pitching coach John Farrell said. “They can be a quick-strike offense as we’ve seen, and certainly that was the case in the eighth inning.’’

Longoria has been a particular nuisance against the Sox, with a .362 average, 8 home runs, 26 RBIs, and an .862 slugging percentage in the 14 games against Boston. (For the record, Longoria has a .259 average against everyone else, with 17 HRs and 65 RBIs.) But in the end, that was just the cap to a game that had started poorly for the Sox.

Josh Beckett struggled early, giving up a pair of solo home runs. Beckett has given up 14 homers in his last five starts, and 24 this season.

But that wasn’t the problem last night. The problem was the second inning.

“The first couple, three innings were a little bit more of what we’ve seen the last four outings, kind of throwing through the movement, elevating the ball,’’ Francona said. “When he made a mistake he paid for it. To his credit, we’re looking at a long night. We even got [Junichi] Tazawa up once. And he reeled it back in and pitched, which was very encouraging.’’

His outing mirrored two of his previous poor outings. In his last start Beckett walked five batters, but his control was more crisp last night. He didn’t walk a single batter (and fanned nine) over six innings. He gave up some hard hits and too many runs. Yet he still gave the Sox some innings, crucial with that weakened bullpen.

Beckett started out by allowing a home run to Carl Crawford in the first, then another homer in the second to Burrell. Then came the key runs, as the Rays hit three straight singles, scoring once. On a bunt attempt by B.J. Upton, first baseman Victor Martinez threw home where Gregg Zaun slid in safely. The Sox made no out on the play, and there were still no outs in the inning.

The Rays, however, wouldn’t get any more in that frame. Still, the Rays had four runs, and would pick up another in the third when Zaun doubled in Longoria, who had reached via a Kevin Youkilis error.

But the Sox chipped away, getting a run in the second, two more in the fourth, and one more in the seventh before evening things in eighth. It was a lost chance to take a game from a team pursuing the Sox, a team that could have been essentially out of the race by the end of the series.

“It’s not ideal,’’ Jason Bay said. “You battle like we did to get that one run to tie it up, and in a matter of two minutes and two swings, all of a sudden they’re right back on top again. Another swing two minutes later and it was a three-run lead. It all happened fairly quick, there wasn’t much time to lament it really. They just played better.

“I think selfishly [Tuesday] night we won that game, it was kind of a safety net knowing that the worst we could leave here is give up one game. Anyone can say what they want, but that’s a good team, and they always play us tough. It’s just a little reminder that it ain’t over yet.’’