THIS STORY HAS BEEN FORMATTED FOR EASY PRINTING
Red Sox 8, Rays 4

Ellsbury and Papelbon are the show-stoppers 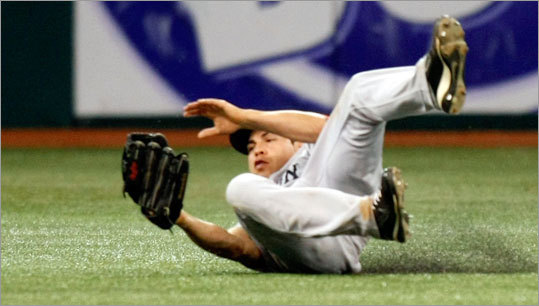 ST. PETERSBURG, Fla. - It was notable that the cat wasn’t black, instead a combination of grays, though the color was hard to determine as it streaked past. Having hidden behind the bench in the visitor’s dugout about a half hour before game time, the animal kept out of the way of the myriad personnel dispatched to remove it. Instead, it left itself.

Before last night, the curse of Tropicana Field had had nothing to do with cats. It had more to do with the Tampa Bay Rays, who had beaten the Red Sox in 13 of 15 games in Florida over the past two seasons. Then, appearance of the apparent apparition be darned, that cloud lifted. Though, by the time the eighth inning came around, the Sox’ hold on a game they ended up winning, 8-4, was far more tenuous than it should have been.

The Rays had scored twice to make it 7-4, the bases were loaded with no outs, and Jonathan Papelbon had come on. It took a rolling, tumbling, game-saving catch by Jacoby Ellsbury to keep the Rays down, a play sandwiched by a 94-mile-per-hour Papelbon fastball for a strikeout of B.J. Upton and a nine-pitch at-bat by Carl Crawford that began with Papelbon getting two immediate strikes and ended with Crawford fouling to left field.

Papelbon finished it out in the ninth, a gargantuan six-out effort from a closer who hasn’t always been lights out, unless the bases have been loaded.

“Oh boy,’’ Sox manager Terry Francona said after the win finally was completed. “I told [Ellsbury], when he came in, I said, ‘Jake, if you miss that and it rolls, just go right up that tunnel and go right out with it.’ I was obviously teasing him. But that’s a game-saver. They’ve got runners moving - that was a heck of a play.

“Ellsbury doesn’t make that play, that was the game right there pretty much,’’ Rays manager Joe Maddon said. “That ball is 2 feet shorter or he’s like 2 feet late, I think we win that game.

Early on, rather than the Sox appearing out of sorts and out of rhythm, it was the Rays who looked like a team ready for the season to end - at least until that eighth, when Hideki Okajima allowed them signs of life with a bunt and a walk and a couple of bloops.

On came Papelbon, though, and he somehow made it through, sending most of the 17,692 Rays fans to the exits, their cheers having died down in the wake of a win by the Sox that put them six games up on Tampa in the wild-card race (and 3 1/2 up on the Rangers).

It had taken offense (hits for all the Sox but Dustin Pedroia, multi-hit games for four), defense (two outstanding catches by Ellsbury), and pitching (nine strikeouts for starter Jon Lester).

“We stayed at them all night,’’ Francona said. “We weren’t able to break it open, but we stayed after them all night, and we got in the bullpen. They made a couple errors we took advantage of. We had a sac fly. We ran the bases. Ellsbury’s play.

The cowbells still rang unabated, though the din was lessened by the smaller crowd. In the first game of a series that could be crucial - or fatal - to the Rays’ hopes of returning to the postseason, the interest was way down from the highs of September of last season.

So, too, was the play of the Rays, who made three errors and whose starter didn’t get an out in the fifth inning. Andy Sonnanstine had been promoted yesterday and then left the game early, starting a parade of relievers that would grow to seven names long.

“The biggest thing I liked about it was we got a win here,’’ Ellsbury said. “We got a win on the road in Tampa. For some reason it’s been tough for us, but it was a nice win tonight. It just puts them back another game.

“Anytime you play them head-to-head, those are big games. With a month left in the season, it’s nice to come in here and get that first one.’’

The Sox got a run in the second helped by a Rays error, and added three in the fourth on a two-run homer by J.D. Drew, who has seven in his last 19 games, and a sacrifice fly by Kevin Youkilis. They tacked on single runs in the fifth (Jason Bay homer), sixth (Mike Lowell sacrifice fly), eighth (Youkilis homer), and ninth (Ellsbury RBI triple).

All the while Lester was pitching well yet again, entering the record books with his 191st strikeout, the most in a season for a Sox lefty. Though his night was abbreviated, at 97 pitches and six innings, because of an aggravated right groin, Lester allowed just two runs on seven hits on a night when his command wasn’t perfect.

That was big. Papelbon’s outing was big. Ellsbury’s catch was big. And getting a win in a place that has been so unfriendly over the past few years, especially against a team standing as direct competition for the wild card, was even bigger.