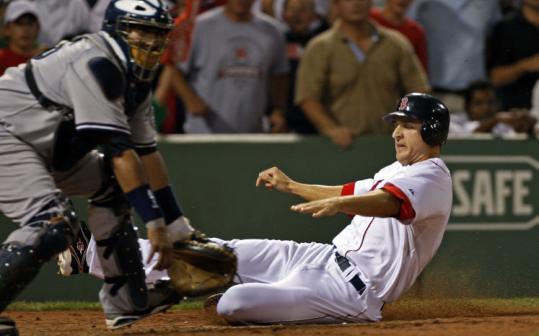 The sign on the wall has the correct call as the Red Sox’ Rocco Baldelli scores in the second inning on a Jason Varitek double. (Jim Davis/Globe Staff)
By Dan Shaughnessy Globe Columnist / August 24, 2009

Things we learned from the weekend of the Yankees’ final regular-season visit to Fenway.

■ Apparently Josh Beckett’s problems with command can’t be blamed on having Victor Martinez as a catcher. With Martinez playing first base, the aptly-named Bronx Bombers hit five homers off Beckett in last night’s 8-4 loss. It was the first time in Beckett’s career he’d given up five homers in a start. Beckett became only the second Sox pitcher to give up five homers in a Yankee game. Dennis Eckersley turned the trick in 1979. Gene “Plane Ticket to Jerusalem’’ Conley yielded four in 1961.

Beckett never makes excuses and characterized this outing alternately as a “[butt]-whipping’’ and a “[butt]-whooping.’’

■ President Obama has summoned Jim Rice and Derek Jeter for a Beer Summit on the Vineyard today. Maybe Rice should go back to not talking to the media.

■ Something tells me Jonathan Papelbon isn’t the guy John Calipari hired to take the SATs for Derrick Rose (see his comments on Billy Wagner).

■ Over a three-year span, CC Sabathia has won his last 11 August decisions.

■ If you are a Red Sox fan, Hideki Matsui is the last batter you want to see with the game on the line. In three games over the weekend, Godzilla hit four homers and knocked in nine runs.

■Kevin Youkilis is the Red Sox MVP thus far this season. Youk doesn’t like questions about the division race or the wild card. He’s a day-to-day thinker.

■ The second through seventh batters in last night’s Yankee lineup all have at least 19 homers and 62 RBIs. “Every time we made a mistake, they made us pay for it,’’ said Sox manager Terry Francona.

■ Michael Bowden’s stock is dropping. He was put in a tough position Friday night, but that wasn’t much of a showcase. It’s way too early to make any kind of call on young Bowden, but the Sox have demonstrated a tendency to overvalue some of their pitching prospects.

■ Francona is not afraid to tell you that he wants Jason Varitek catching Beckett and Jon Lester. He’s also not shy about benching David Ortiz against Sabathia even though Big Papi is on a tear and is 7 for 23 (.304 lifetime) against the big lefty. The manager looked like a genius with Rocco Baldelli and Varitek in the lineup last night. Baldelli and Varitek stroked back-to-back two-out RBI hits in the second inning.

■ Baldelli’s hitting music is Hendrix’s “All Along The Watchtower.’’ Gotta love that.

■ The irrational booing of Johnny Damon at Fenway will never stop.

■ Good guy Tommy Harper jokes about going all Tonya Harding on us, but he’ll keep coming to the park and rooting for Jacoby Ellsbury until the kid breaks Harper’s club stolen base record (54). Ellsbury reached on an error in the first last night, but he was caught stealing when he misread Sabathia’s slide-step. Let’s hope Ellsbury’s quest doesn’t drag out like the Yaz (3,000 hit) Watch.

■ You can’t blame general manager Theo Epstein for lack of aggressiveness since the end of July. The Sox are still paying for not paying Mark Teixeira last winter, but that decision was made by owner John Henry. Theo’s been working overtime since the trading deadline.

■ The Sox and Yanks are both tough to beat when they score 14 runs.

■ We missed Bob Lobel last night. It would have been a good night for Lobie to air tape of John Smoltz smothering the Padres and ask, “Why can’t we get players like that?’’

■ A.J. Burnett looks like a head case. Soft. Easily unraveled. And let’s not hear any more about a communication gap with catcher Jorge Posada. Mariano Rivera seems to have done just fine with “Hip-Hip, Jorge.’’

■ Who’d have guessed Junichi Tazawa would outpitch Beckett in the series? Tazawa looks very hittable, but the kid is not afraid to throw any of his four pitches on any count.

■ “Sweet Caroline’’ jumped the shark about two years ago.

■The season series stands at Red Sox 9, Yankees 6, with three to play in Yankee Stadium next month.

Right now, the better team is the Yankees. They’ve won six of the seven against the Sox since Aug. 6. It would be nice to see the Sox and Yankees face one another in the ALCS again. It hasn’t happened since 2004 (remember that one?), but if the season ended today, the Division Series would pit the Sox against the Angels and the Yankees against the Tigers. Detroit is clearly the weakest of the four prospective American League playoff teams and it’s hard to imagine the Yankees losing to the Tigers. The Angels are better than they’ve been in other years when they played the Sox in October, but Mike Scioscia’s guys always dissolve when they come to Boston for the playoffs.