THIS STORY HAS BEEN FORMATTED FOR EASY PRINTING
Red Sox 14, Yankees 1 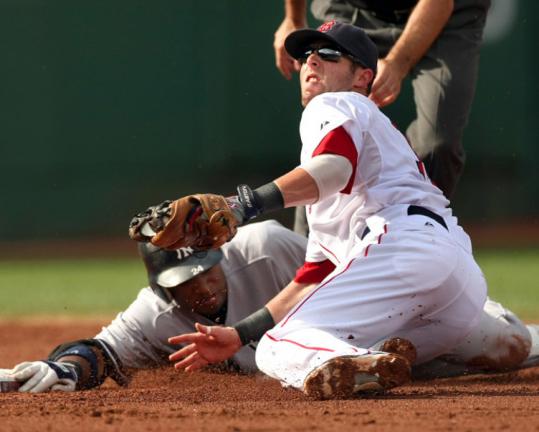 Robinson Cano is tagged out at second base by Dustin Pedroia trying to stretch a single to left; Jason Bay made the throw. (John Tlumacki/Globe Staff)
By Amalie Benjamin Globe Staff / August 23, 2009

Before yesterday’s game, as Terry Francona discussed his upcoming rotation, he asked for patience. Patience from Brad Penny, and patience from the media, to see what transpired over the next nine innings.

Those innings - at least the six pitched by Junichi Tazawa - must have been a balm for a manager relegated to removing one pitcher from the rotation yesterday.

Tazawa’s outing was a soothing one, as much as Penny’s was jarring the night before. With some trepidation based on how Tazawa pitched his last time out in Texas, the young starter emerged unscathed from a tangle with the Yankees hitters that had victimized him (at least in the case of Alex Rodriguez) in his major league debut.

And it was Rodriguez who helped demonstrate the poise that has been the hallmark of Tazawa’s young career. Because, after having thrown two off-target curveballs to get to 3-and-2 on Rodriguez in the third inning, Tazawa came back with a perfect hook that left him looking. It was the same pitch that Rodriguez drilled for his walkoff homer in the 15th inning off Tazawa Aug. 7.

“The challenges that he’s faced in a very short period of time, he’s met them with the same mentality, the same body language that he showed in spring training,’’ pitching coach John Farrell said, after Tazawa had earned the win in a 14-1 clobbering of the Yankees at Fenway. “Again, the last time he pitched against Detroit here, we were saying less than a year ago he was pitching in the Industrial League in Japan. What he’s done in a very short period of time is impressive.’’

The Sox picked up on that quality in spring training, whether Tazawa was facing teammates in batting practice or other teams in exhibition games. He held himself together, met his targets, threw his pitches. That was just what he did yesterday, facing an offense that knocked out the Sox the night before. Having suffered at the hands of the division-leading Yankees Friday, the Sox shared the pain yesterday, scoring 13 runs with two outs and breaking a five-game losing streak to New York.

“The mound presence and the poise that he has, we knew that would be something he would take to the mound today,’’ Farrell said. “It further played out with some key pitches in some tight situations, particularly with two outs, some not only big-name hitters, but some very productive hitters at the plate. He did a great job for us.’’

The offense started early, with A.J. Burnett demonstrating none of the magic he had in his duel with Josh Beckett the last time he faced the Sox. Instead, it was Tazawa who provided the innings and the results that the Sox desperately needed.

“We were thinking about sending him home early [Friday night], so he wouldn’t have to watch,’’ Francona joked before the game, referring to the Yankees’ 20-run, 23-hit onslaught.

Tazawa threw six solid innings, the 11 runners amounting to nothing. He remained poised, as Francona had said he would, in his second chance against New York.

“Against a lineup that is dangerous, probably on bad days, and they come off and they swing the bat like they did [Friday], he executed a lot of pitches,’’ Francona said.

“Early in the game, there was some pretty solid contact. [Jason] Bay’s play [cutting down Robinson Cano at second, trying to stretch a second-inning single] was huge at the time, stopping a potential rally. But he executed pitches, especially when they had runners on base.

“He had a way of maybe dialing up that fastball a little bit. Not throwing it, but locating it with a little extra on it. Threw his split, breaking ball, and he did a great job.’’

Tazawa’s most impressive inning might have been his most dangerous.

The Yankees had men on first and third in the sixth with Melky Cabrera at bat. With his final pitch of the day, a curveball, Tazawa got Cabrera to ground into an inning-ending double play, finishing his scoreless outing and keeping the Sox’ lead at nine.

“I knew I would allow a couple of hits, but I didn’t want to give in,’’ Tazawa said, through interpreter Mikio Yoshimura. “I didn’t allow runs and I tried to locate my pitches to the good corners, which I could today.’’

To get to that point (at which the Sox and Yankees had combined for 40 runs in their first 14 innings of play, 20 apiece), the Sox took advantage when they were down to their final chances.

So as much as the Sox offense continued an explosive trend - scoring 49 runs over the last five games - the pitching was far more crucial. Yes, Ortiz extended his torrid streak, and Youkilis doubled his home run pleasure and had six RBIs, but Tazawa impressed most of all.