Surge by Ortiz has given the offense some pop 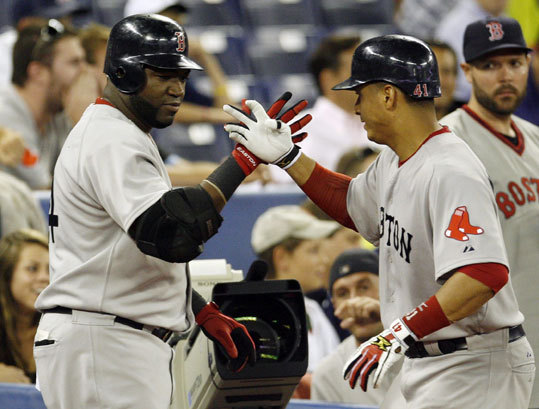 TORONTO - During the most trying season of his career, David Ortiz remains a catalyst for the Red Sox, a fact not lost on them last night. In the second inning, Ortiz walked to the plate in a scoreless game. Roy Halladay hung a breaking ball. Ortiz laced a line drive that eked over the right-field wall. The Sox knew it meant more than just one run on the scoreboard.

“When we go well, he’s usually right in the middle of it,’’ Red Sox hitting coach Dave Magadan said. “As he goes, we seem to go, too.’’

Ortiz’s home run served as the surest sign of a Red Sox victory as there is this year. In games Ortiz has homered, the Red Sox are 17-2, which includes their 6-1 win last night over Halladay and the Blue Jays. Ortiz sparked the Red Sox’ attack for the second straight game and continued his torrid road trip.

Ortiz arrived in Texas 4 for his last 41, without an extra-base hit during the span. Manager Terry Francona dropped him to seventh in the batting order, the lowest Ortiz had hit since May 2003. The next logical move was out of the lineup.

In five games since, Ortiz is 7 for 16 with four home runs, two doubles, seven RBIs, eight runs, and seven walks. With his surge, Ortiz both lifted the Red Sox’ offense and unveiled its potential. This year’s Red Sox offense doesn’t slump. It waits for Ortiz to get hot.

“Like I said in March and May and June, he’s a huge part of this offense,’’ left fielder Jason Bay said. “Now that it’s August, I guess he still is. You got to kind of look at it as such: Basically, he gets hot, it’s almost like we pick up a bat.’’

Ortiz offered few clues about his hot hitting. A reporter informed him that he had homered in three consecutive games for the first time since July 2006. “I feel good,’’ he replied.

On Tuesday, he was asked the key to his recent streak. “Just see the ball and hit it, man,’’ Ortiz said. “Simple.’’

The easy connection is that Ortiz has heated up as the pressure from explaining his reported positive drug test in 2003 has faded. “I’m sure that doesn’t hurt,’’ Francona said, but to Magadan, Ortiz’s demeanor appears unchanged.

“I think he’s been pretty consistent,’’ Magadan said. “He wasn’t, to me, any different with his personality, [ticked] off. He didn’t have a state of mind that, I felt, was much different than normal.’’

Ortiz’s surge in power and production, Magadan said, owes more to his approach. Even considering Ortiz’s spate of home runs, Magadan pointed to a more subtle at-bat as evidence of Ortiz’s turnaround.

On Tuesday night, Ortiz faced Ricky Romero with the bases loaded. With the count 2-2, Romero threw a slider over the outside corner.

During his slumps, Ortiz has tried to pull the ball no matter where it is pitched. Magadan has repeated an imperative to him: Just try not to take what’s not there.

“When he uses the field,’’ Magadan said, “he’s more dangerous.’’

Facing Romero’s slider, Ortiz waited, held back his hands, and flicked a soft line drive to left. It was not the kind of swing that comes to mind when you think about Ortiz, but it was perfect for the situation The ball rolled into the corner for a two-run double.

“You’re seeing some more aggressive swings without trying to muster up all that strength,’’ Francona said. “His bat’s getting through the zone a little bit better.’’

Ortiz has reasserted himself as a force in the Red Sox lineup while hitting near the bottom of it. He moved up to fifth last night, one night after Francona penciled him seventh after Jason Varitek had to be scratched. Ortiz’s hot bat, especially with the insertion of Victor Martinez and today’s expected return of Dustin Pedroia, provides an extra dimension to the offense.

“When we can get some production out of the bottom of the lineup, I like our chances of scoring runs,’’ Magadan said.

“Coming out of spring training, there was a big debate - somebody is going to have to hit seventh,’’ Bay said. “Now we’re going back to that situation. We’ve got Victor now, and some guys are getting pushed down. I don’t think anyone is complaining.’’

Adam Kilgore can be reached at akilgore@globe.com