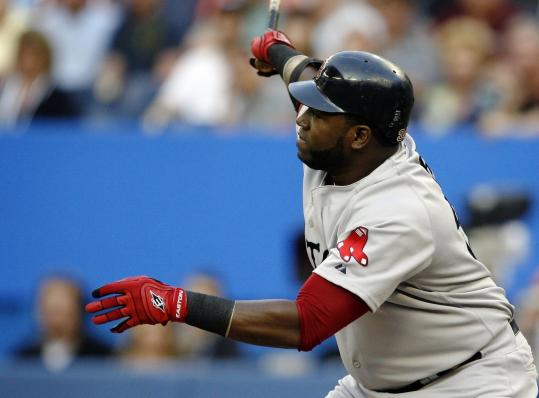 David Ortiz continued to swing a hot bat last night, connecting off Roy Halladay for a solo homer in the second inning that got the Red Sox on the board. (Mike Cassese/Reuters)
By Amalie Benjamin Globe Staff / August 20, 2009

TORONTO - Between innings, as his players run out to their defensive positions or get ready to pick up a bat, manager Terry Francona often takes a peek at the out-of-town scoreboard. He does it all season long. It relaxes him. But scoreboard watching takes on added meaning this time of year.

And, yes, Francona knows that, too. It’s definitely different now.

“When I was in Philadelphia, it was my biggest - I was almost jealous. I mean, you get to September and you look at teams that were just beat up. Like on a Sunday day game, and we’re out there trying to tell ourselves we’re going to try to win today and be the spoiler.

“You know what? [Expletive] that. That’s not that much fun. Being in it, where you’ve got guys, you move a guy from second and it’s a big deal, it’s a lot of fun. It’s not always a lot of fun, ’cause when you lose, it crushes you, but that part is, I love that part of that.’’

It’s the time of year when games seem to mean more, though they technically count the same. That’s a far cry, as Francona mentioned, from his days in Philadelphia. Jason Bay understands it, too. It’s a pretty different feeling than he had all those years in Pittsburgh.

“I think I have a different perspective than some people,’’ Bay said. “Because of that, you get into the dog days of summer, a lot of the teams that are out of it, you go up there, it’s easy to maybe take an at-bat or two off, kind of have that day, man I’m just feeling blah.

“That doesn’t really happen here. Every day - even last night, it’s a Tuesday night in Toronto, we have [25,000] fans, it was a great atmosphere. That doesn’t happen with a lot of teams in a lot of situations.

It’s the part of the season when, as Francona said, “every game seems to mean so much. Nothing wrong with that. As long as it doesn’t get in the way of the way you play, there’s nothing wrong with accepting the fact that these games mean a lot to us.’’

There’s no arguing that, especially after a playoff-style series in Texas over the weekend, and with the Sox holding a one-game lead for the wild card.

“One of the announcers in Texas came up to me the other day, Josh Lewin, who’s a good friend of mine, and he said something about we’re excited to be in this position, it’s probably gotten old for you,’’ Francona said. “I said, ‘What, are you crazy? This is why we do this.’

“And I was actually stunned that that was his perception. We don’t ever need to lower ourselves to have it be old hat. When that happens, I’m going to go do something else.’’

Wakefield lined up
The schedule for Tim Wakefield has been solidified. After speaking with doctors and getting reassurance that he will not do any additional damage by pitching, Wakefield is headed for a start tomorrow in Pawtucket. He will throw 75-80 pitches, which is “open to adjustment if need be,’’ Francona said. That could mean that, barring setbacks, Wakefield would pitch in Boston the next time out.

“He’s not going to hurt himself by pitching,’’ Francona said, referring to the nerve damage in Wakefield’s back that has traveled to his calf. “I mean, anybody can be hurt any time. But he’s not endangering himself by pitching. He’s not endangering his potential recovery of leg strength by waiting until October if - if - a surgical procedure is needed. And again, these are big ifs. Wake was satisfied and reassured by the call.

“Now, saying that, he’s still got a lot of deficit in that calf. And to have him in a major league game, if he lands on that thing 75, 80 times, or if he goes to cover first, there are some things that can go wrong.

“If we put him in a Triple A game, we feel like it’s still a game, and there’s going to be people trying to beat him, and he has to do some reaction things like he has to do here. If things don’t go well, we can always take him out of a game. And if they do go well, then we can bring him back and have him pitch for us.’’

One major concern is whether other teams would bunt on Wakefield. Francona’s response: “Some guys can’t [bunt]. I do think we’d be crazy to think that somebody is not going to exploit a weakness. That’s part of the deal. Saying that, it’s not as easy as it sounds.’’

Pedroia on board
Dustin Pedroia is expected back in the lineup today. His wife, Kelli, went home from the hospital early yesterday afternoon, after giving birth to son Dylan Tuesday. Francona made sure to say that if something changes, Pedroia is free to alter his schedule . . . Pitching coach John Farrell returned to the team yesterday from Cleveland. “He said he’s dealing with a very serious family matter,’’ said Francona. “He does appreciate your concern. He also would appreciate the respect of their privacy. That’s the way they would like to keep it.’’
Silent treatment
In just the second game back from his five-game suspension for charging the mound after being hit by a Rick Porcello pitch, Kevin Youkilis was again hit by a pitch. Brandon League hit Youkilis right after Victor Martinez had blasted a solo home run in the ninth for the Sox’ sixth run. It was the 11th time Youkilis had been hit by a pitch this season. Youkilis wasn’t interested in talking about the incident. “I don’t care,’’ he said. “I’m done with all those discussions. I’ve got no more comments. That’s how I’m going to handle it from here on out. If I get hit by a pitch, I’ve got no comment. That’s just how it’s going to be now.’’ . . . Paul Byrd made his debut for Pawtucket, pitching four innings, allowing three runs (all earned) on six hits and a walk. He struck out three and threw 74 pitches, 49 for strikes . . . The Sox have hit two or more home runs in each of their last five games . . . Daisuke Matsuzaka continues on the road to recovery in Florida. He will throw a side session tomorrow, then pitch two to three innings in a Gulf Coast League game. If everything goes according to plan, Matsuzaka will pitch for Double A Portland Aug. 29, throwing about 50 pitches. His next start would be Sept. 3 for Pawtucket, approximately 65 pitches. Matsuzaka will return to Boston after his GCL start for a reevaluation with team doctors . . . Jason Varitek remained out of the lineup yesterday with muscle spasms in his neck. Francona called the catcher “minimally better.’’ Varitek was able to serve as the backup catcher last night, though the Sox would have been in quite a bind had they had to go to their third option. They don’t really have one. “Whoever says they can do it,’’ Francona said, when asked who would take over. “I’m laughing about it, but if we get to that point, we would probably - you know, it’s funny. When you get to that point, it’s amazing how true colors sort of come out. Like eight guys will come out and go, ‘I can do this.’ ’’