THIS STORY HAS BEEN FORMATTED FOR EASY PRINTING
Rangers 4, Red Sox 3

Red Sox not wild about their results 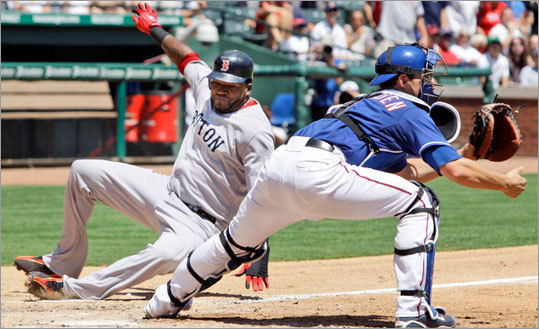 (AP) David Ortiz, left, slides into home plate to score in the fifth, but it wasn't enough to lift the Sox past the Rangers.
By Amalie Benjamin Globe Staff / August 17, 2009

ARLINGTON, Texas - The Red Sox, despite their recent woes, are not so deflated that they can’t still crack a joke here and there. But the jokes recently have turned to sarcasm, with a hint of desperation.

As Jason Bay said yesterday, after the team had lost yet another road series to fall a half-game behind the Rangers in the American League wild-card race, “We should probably just pack up the season and call it a year, huh? Half-game back, might as well fold the tent.’’

That won’t happen, of course. But the Sox also can see the reality of their position. With their 4-3 loss in front of 27,155 at Rangers Ballpark, the team has gone 12-17 since the All-Star break. Even with the Rays’ recent five-game losing streak, Tampa Bay is just three games behind the Sox.

“We haven’t played up to our capability, that’s for sure,’’ Mike Lowell said. “If today was the last game of the season, I think we’d all be crying right now. But we still have a month and a half of baseball left and a chance to turn it around. I think we’ve got to look at it as that. But we can’t keep playing the way we are. We have to improve in more than just one area.

“We’re not going to trade nine guys. We have to do it with the guys we have. We’re capable of it. We’ve just got to get more hits.’’

That won’t be easy against Toronto (especially with Ricky Romero and Roy Halladay starting tomorrow and Wednesday), nor was it easy against the new-and-improved Rangers staff. A team that long has been known for a great offense and disappointing pitching, the Rangers have put it all together this season, something Bay credited to their pitching coach, Mike Maddux. The Rangers won seven of the nine games between the clubs this season, their best winning percentage (.778) ever against the Sox in a season in which they played at least seven times.

But the Sox have to focus on getting themselves together, regardless of what Texas is doing.

“There’s still a lot of baseball left,’’ Bay said. “Granted, you would have liked to take the series, but I don’t think anything changes. Not on our end, anyway. We still have a ton of divisional games coming up. Kind of make or break there a little bit, but I think it’s a little too early to start altering your approach.

“There’s still a lot of optimism. At the same time, we need to kind of take an active approach, a proactive approach to getting it done rather than waiting for it to happen.’’

Junichi Tazawa made his second start for the Sox, and the Rangers took advantage of some pitches that were too high, and of a fastball that wasn’t quite spot on. He allowed four runs on 10 hits in five innings plus, and in recent years the Sox might have pasted the Rangers’ pitchers with their own spurt of offense. But Dustin Nippert used his changeup more effectively as the game went on, and this just isn’t the same Sox lineup as in recent years.

“He gave us a chance to compete,’’ Lowell said of Tazawa. “But we don’t just want a chance anymore. We want to be able to put teams away and that’s not just the pitchers, I think that’s the offense as well, to be able to maybe explode and put up seven runs in four or five innings. We haven’t done that at all.’’

The Sox left nine men on base. They had men on in every inning except the ninth, and multiple runners in five innings. But they scored just three runs, two on homers by David Ortiz in the second and Dustin Pedroia in the seventh.

In the eighth, they had runners on first and second with just one out. Brian Anderson, though, struck out looking on a pitch that appeared low. Alex Gonzalez followed with another caught looking.

After an Anderson sacrifice fly produced a run in the fourth, the Sox had runners at second and third with two down and Jacoby Ellsbury at the plate, but he grounded to second.

Pedroia had a few words with plate umpire Lance Barksdale after striking out looking in the ninth.

“We had chances,’’ Pedroia said. “They made good pitches on us at certain times. We’re trying to put good at-bats together and I understand the pitches were pitchers’ pitches and maybe a little out of the zone, that happened to a few of us, but we should have known that.’’

The Rangers got a run in the second on an Ian Kinsler homer, his second in as many days. They got two more in the third on a Josh Hamilton RBI double and a Kinsler RBI single. Their last run came on a mammoth Taylor Teagarden homer off Tazawa to start the sixth.

“We don’t want to get into a must-win situation yet,’’ Bay said. “One of those games [in Toronto] Halladay is going, so that’s going to be tough in and of itself, but I don’t think we’re in a must-win situation yet. But a team that’s probably scuffling a little bit lately, we haven’t played very well there, so we need to get the ball rolling at some point.

“I’ve said it the whole time, we’ve played well at home, but until we start playing a little bit better on the road, we aren’t going to be taken seriously.’’