THIS STORY HAS BEEN FORMATTED FOR EASY PRINTING
Tigers 2, Red Sox 0

Buchholz is outdueled by Tiger flamethrower 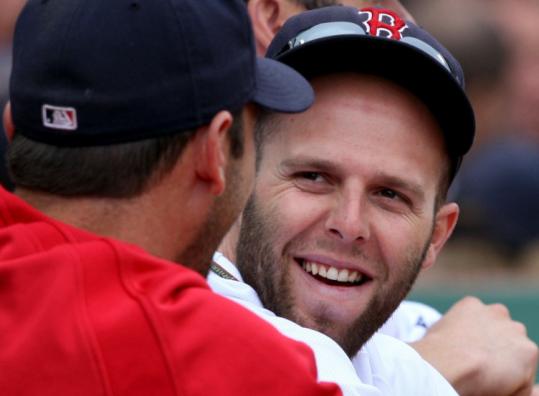 Red Sox second baseman Dustin Pedroia got a rare day off yesterday but will be back in action tonight in Texas. (Bill Greene/Globe Staff)
By Adam Kilgore Globe Staff / August 14, 2009

The Red Sox thought they had a chance against Justin Verlander in the eighth inning yesterday. Jacoby Ellsbury stood on second base after a leadoff double. Two runs would tie the game. The Fenway Park crowd, silent all day, like Boston’s offense, rose to its feet.

The scene was real, the opportunity was a mirage, and only Verlander knew.

On his 122d and 123d pitches, the final ones he threw, Verlander fired 100-mile-per-hour, letter-high fastballs toward Jason Bay. On the second, Bay may as well have swung a toothpick.

An inning later, the Red Sox quietly concluded a 2-0 loss to the Detroit Tigers, snapping their three-game winning streak as they head into a showdown in Texas against the Rangers, whom they lead by a half-game in the wild-card standings.

In the Red Sox dugout, Clay Buchholz could only shake his head and smile. For the second straight game, he had pitched well enough for the Sox to feel encouraged about his place in the rotation. He lasted seven innings and allowed two runs, dealing all four of his pitches. He made one mistake all day, a two-seam fastball Ryan Raburn crushed over the Green Monster in the seventh.

“That’s the only pitch I can look back on and say, ‘I messed up right there,’ ’’ Buchholz said.

But, for the second straight game, Buchholz walked off the mound one-upped by an elite counterpart. Last Saturday, CC Sabathia no-hit the Red Sox for 5 2/3 innings while Buchholz grinded to allow the Yankees two runs over six innings. The Sox haven’t scored a run in Buchholz’s last two starts.

“I’m picking the wrong pitchers to throw against,’’ Buchholz said.

The crowd still stood with two outs in the eighth, when Ellsbury stood on second and to the plate walked Bay, who had hit home runs in three consecutive games. Verlander knew Bay was going to be the last batter he faced.

“I’m not going to let them tie the game,’’ Verlander said. “I gave them everything I had. I wasn’t holding anything back.’’

Verlander fired five pitches at Bay. None traveled slower than 99.

“I challenge anybody to find somebody with better stuff than him,’’ Bay said.

Afterward, reliever Daniel Bard and shortstop Chris Woodward spoke, two men who don’t know each other well brought together by their common awe. Bard has touched 100 on the radar gun before, but never in the manner of Verlander.

It helped Verlander to face a Red Sox lineup that included five batters hitting .250 or less and one, third baseman Mike Lowell, batting better than .300 when the day began. With Kevin Youkilis serving a suspension and Dustin Pedroia receiving a day off, the Sox played without two of their best hitters.

And yet Buchholz made victory a possibility.

“As good as Verlander was,’’ Sox manager Terry Francona said, “I thought Clay was almost one pitch worse. It’s amazing how the glass can look a lot more full when Clay goes out and does that.’’

The Tigers scored their first run in the fourth. Miguel Cabrera reached on a sinking liner to right that zipped just under Josh Reddick’s glove, and Cabrera advanced to second when Reddick booted the ball. Cabrera scored three batters later when Raburn grounded a ball down the third base line, slow enough and close enough to the line that Lowell had no chance.

Counting both of those potential outs, Buchholz allowed the Tigers five hits over seven innings, walking three and striking out three. He used his two-seam fastball to get ahead and to fight back from behind in the count, pitching to induce contact rather than avoiding it.

“I’m not scared to throw pitches over the plate,’’ Buchholz said.

The confidence helped him further establish himself as a cog in the Sox’ rotation. Buchholz lasted seven innings in the majors for the first time since April of last season. Although his ERA for the year still sits at 4.45, he has allowed four earned runs in his past 13 innings.

The streak helped veer Buchholz away from repeating last year’s disaster. In the start before he faced the Yankees, Buchholz allowed the Orioles seven runs in four innings. Last year, the one bad outing may have led to a meltdown. This year, it sparked a resurgence, another sign of how far Buchholz has come.

“I was just waiting to get sent down,’’ Buchholz said. “It felt like eternity between each start because I thought I wasn’t going to be up here for the next one. But now, I feel like I’m here and I can definitely help this team every time I do go out.