THIS STORY HAS BEEN FORMATTED FOR EASY PRINTING
Red Sox 6, Tigers 5

With weekend circus behind them, Sox snap six-game skid 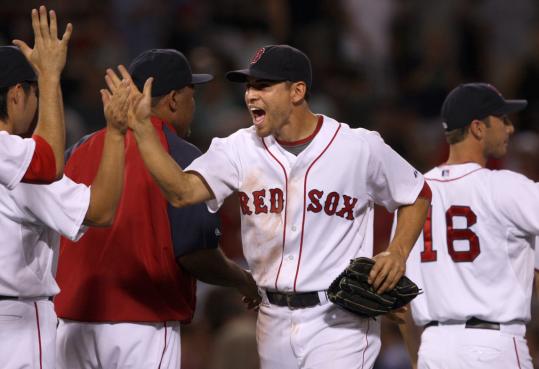 Jacoby Ellsbury (two hits, stolen base) was one happy Red Sox after a win over the Tigers. (Bill Greene/Globe Staff)
By Adam Kilgore Globe Staff / August 11, 2009

The most treacherous 41 minutes of the Red Sox season occurred late Sunday night, and it was not during their collapse at Yankee Stadium. Their charter rumbled the entire way from Newark to Boston, the most turbulent flight manager Terry Francona could recall taking with a major league team. Once the plane landed, the players felt relieved. They were home.

Their wounds still fresh from their ruinous road trip, the Sox found another safe haven yesterday afternoon when they trickled into Fenway Park. They dashed their vicious batting slump and ended their six-game losing streak with a 6-5 victory over the Detroit Tigers before 37,960. The Sox pounded 12 hits and crunched three home runs, enough offense to withstand shaky middle relief and set up Jonathan Papelbon for a four-out save.

It has been a rough stretch, without question. But if the season ended today, the Sox would make the playoffs - they moved a half-game ahead of the idle Rangers in the American League wild-card race. More important, the Red Sox stabilized themselves mid-free fall.

“It’s easy to downplay and say it’s just another game,’’ left fielder Jason Bay said. “But the last thing you want to do is lose another one and you keep saying the same thing - ‘Hey, no big deal, lots of season left.’ That whole thing. Then you end up all of a sudden trying to get yourself out of quicksand. Just that one game to stop it sometimes means more than just one win.’’

The Sox scored two runs before recording an out, matching their total from the previous 33 innings, when Dustin Pedroia drilled a home run over the Green Monster in the first inning. They led, 4-0, after two innings, but nothing has come easy lately, and that theme did not change.

Starting pitcher Brad Penny vomited because of acid reflux before his final inning, the 1-2-3 sixth. The winning run didn’t come until Nick Green, who had driven a ball clear out of Fenway earlier in the game, lined a sacrifice fly to center in the seventh to score J.D. Drew.

“Not everything went our way,’’ Francona said. “We desperately needed to find a way to win a game. And we did.’’

Bay’s parabolic homer into the Monster seats gave the Red Sox a 5-3 lead in the fifth, but the Tigers refused to fade. Manny Delcarmen surrendered the two-run edge in the seventh on a pair of two-out hits.

The Sox had ignited their offense with power. When they needed one run, and they relied on precision. Drew led off the seventh with a single. With one out, the Sox called a hit-and-run. Casey Kotchman’s single scooted through the middle while Drew hustled to third base, a clinical play that placed the go-ahead run on third for Green.

Green understood the urgency, but he decided not to dwell on it. “That’s what happened in New York,’’ he said. “We got down and everybody started pressing.’’

Green wanted a pitch up in the strike zone, preferably a fastball, so he could lift it to the outfield. He would avoid breaking balls, but he figured Detroit reliever Zach Miner was thinking like he was. Green expected Miner would throw a slider. “Luckily,’’ Green said, “he didn’t.’’

Miner fired an inside fastball. Green was surprised and his swing showed it, but he put enough on the ball to line it to center. Curtis Granderson made a strong throw, but Drew still scored standing up.

The Sox bullpen still had work to do. Ramon Ramirez, who had cleaned up Delcarmen’s mess, allowed runners to reach second and third with one out. When Adam Everett stepped in, a fly ball meant a tie game. Ramirez would rely on his funky offspeed offering, a unique pitch that looks like a changeup at first but breaks like a slider. Ramirez hoped for a ground ball. He did better - Everett struck out on an 89-mile-per-hour changeup that broke away and down.

Ramirez had done his job, and Francona called on Papelbon, who quelled the eighth-inning threat by inducing a popup behind home plate by Granderson. He set the heart of the Tigers order down in order in the ninth, inducing a pop to right by Miguel Cabrera for the final out. In completing his first four-out save since May 4, Papelbon threw only 11 pitches.

The Sox belted nine hits in the first three innings and exhausted Tigers starter Edwin Jackson, who entered with the second-best ERA in the American League at 2.62, after four innings and 104 pitches. They began their assault, and pronounced their slump over, from the very start.

Jacoby Ellsbury - the one Red Sox immune from the club’s ineptitude over the weekend - led off the game by flicking a double into the left-field corner. Pedroia walked to the plate 1 for his last 12, a slump accentuated by an atypical glitch. Pedroia is one of the hardest players in the league to strike out; his one-per-14.56 plate appearances rate this season ranks fifth best in the majors. But he struck out three times over the weekend.

In his first at-bat of the homestand, Pedroia atoned. He bashed a high line drive into the first row of the seats atop the Green Monster, a blast that extended a certifiable home run binge. Pedroia hit four home runs in his first 379 at-bats. He pleaded that his home runs come in bunches, usually when the weather warms up. Since July 27, Pedroia has five homers in 59 at-bats.

Pedroia hit his latest on an 0-2 pitch. Asked to recount the at-bat afterward, Pedroia paused.