THIS STORY HAS BEEN FORMATTED FOR EASY PRINTING
Yankees 13, Red Sox 6 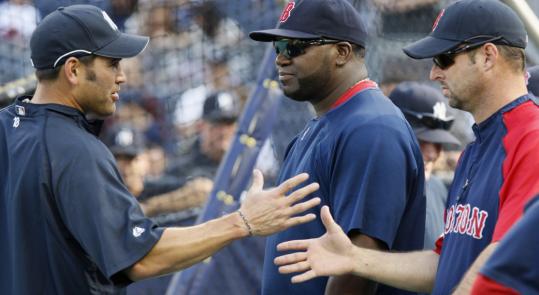 NEW YORK - The sweat dripped from John Smoltz’s face as he stared in at his catcher. He looked lost and beaten. He had seen nights like this in his long career, spanning two decades, but never has he experienced so many in such a short period of time - at a point in his life when his hold on a spot in the rotation appears ever more tenuous.

It had taken one pitch to make the sweat pop, and to bring John Farrell out of the dugout on a mercy mission.

It was another fastball, this one driven into the second deck in right field by Melky Cabrera. Having already given up a run in the inning, narrowing the Red Sox’ lead to one, Smoltz earned himself more questions and more frustration and more doubt.

More hits followed that seared home run, which put three runs on the board for the Yankees and gave them the lead. Johnny Damon singled, Mark Teixeira doubled, and Alex Rodriguez walked.

And that was it. Manager Terry Francona was out of the dugout, pulling the future Hall of Famer from the game and putting future starts with the Sox in jeopardy. Smoltz’s reputation, tarnished with every outing, grows a touch dimmer. He has not been able to come back from major shoulder surgery the way he wanted, has not been able to perform as a productive member of the rotation.

On a night when it looked as if the Sox were crumbling from within - a night that could foreshadow an early end to their season - the Yankees had all the answers. In front of 49,005 overjoyed fans, the Sox dropped their third straight, this one by a humiliating 13-6 score, ending their run of eight consecutive wins against New York.

“It’s a long year and sometimes you’re a little beat up,’’ Francona had said before the game. “We’ve had some guys go down. We’ve lost some pitching. And sometimes you’re not in a position to maybe reel off eight out of nine. That’s just being realistic. But if you could hold your own sometimes until guys are healthy and, just in our case, play good baseball, we like our team a lot.

“Part of the reason we like our team is because when things don’t go well we have guys that’ll keep playing and we feel like they’ll figure out a way to get through the tough times. That’s part of it. There are so many frustrations in this game, even on really good teams, that how you handle those frustrations a lot of times defines your season.’’

Dustin Pedroia put it succinctly: “We know there’s injuries and guys going down, but other guys have to step up and play better.

“We really didn’t pitch very well, we really didn’t play very well,’’ Pedroia said. “We allowed them to get back in the game, and then they just put it on us . . . My concern is the way we’re playing. We’re not playing very good . . . We’re playing like [expletive] right now. That’s obvious. We went into Tampa and they beat up on us and we came here, hadn’t played very good. We’ve got to play better. We’re hitting a stretch of the season where we’re playing the best teams in the division. We’ve got to win.’’

They aren’t doing that right now. Whether that’s because of their pitching - Brad Penny and Clay Buchholz have joined Smoltz in the ineffective ranks of late - or because of the rapidly rising number of injury-slowed players, the Sox need to fix themselves.

As David Ortiz said, “It seems like we’ve got to go through that every year. No way we can stay healthy all year round. When you lose games, of course you worry about we should have got it done better. But after you lose it, nothing you can do but clean up your head and come back next day and fight back.’’

Francona had said, before the game, that Smoltz “needs to locate his fastball, especially against the Yankees.’’ Smoltz did no such thing, the fastball to Cabrera doing the most damage in an inning in which he allowed five hits, two walks, and seven runs, all while getting just one out. His ERA became an even more bloated 8.33, a number ripe for a demotion out of the starting five.

As Smoltz said of fixing his troubles, “Time may not be on my side if this continues.’’

“Pretty humbled right now with the way things have gone,’’ he said. “I never like to use the word embarrassed, but I have a lot of pride and certainly don’t like letting somebody down.’’

After a quick start for the Sox, on an opposite-field homer by Pedroia in the third and a two-run homer by Casey Kotchman in the fourth, both assisted by the new Yankee Stadium, the hosts took over, starting with Johnny Damon’s homer in the third, and continuing with an ulcer-inducing 34-minute fourth that ended with Billy Traber allowing a three-run homer to Jorge Posada to cap the eight-run frame.

The debacle came during a stretch in which the Sox are aching and injured. They were scrambling enough last night that Kevin Youkilis played left field. In a season that is starting to look frighteningly like 2006, the Sox have now lost three straight, all to the cream of the American League East.

So the capacity crowd in Yankee Stadium crowed with the glow of schadenfreude, from the recent revelations of Ortiz’s place on the steroid list to the utter beating they were giving the Sox.

More than half an hour after the game had been completed, with the clubhouse emptying, Smoltz stood near the entrance to the clubhouse locked in conversation with Farrell. Smoltz looked, as he had all night, as if he had no answers. He looked as though he were searching for something that he has yet to find while in a Red Sox uniform.

“If I had answers, I’d give them,’’ Smoltz said. “I’m just a big enough man to stand up here and say I’m not doing it. Nobody feels worse than I do.’’