For legions of fans, a magic spell is broken 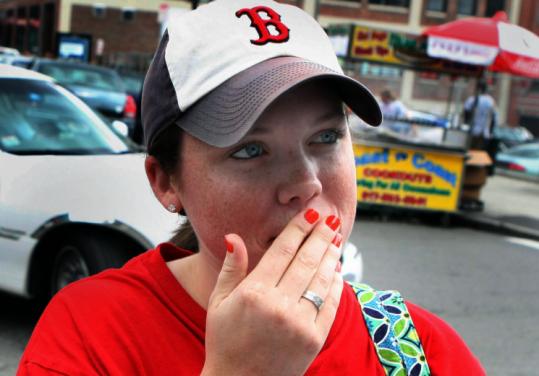 ‘At first I didn’t believe it. But I guess I just didn’t want to.’ Callie Adams 20-year-old fan from Pembroke (Jonathan Wiggs/Globe Staff)
By Peter Schworm and Brian Ballou Globe Staff / July 31, 2009

The news struck like a thunderclap, a bolt that shook fans to the core and bruised their fondest memories.

David Ortiz, the legendary Red Sox slugger adored by legions of fans, had reportedly used performance-enhancing drugs, a cruel revelation that left countless fans adrift and disillusioned. The scourge that has hung over the game for years, sullying many of the game’s brightest stars, from Barry Bonds to Roger Clemens, had now claimed one of Boston’s own.

The news raced through the stands at yesterday’s matinee game at Fenway, and as it did, a larger-than-life figure, who came through under pressure time and again, shrunk before their eyes.

“He was a hero to a lot of us, and now it feels diluted, somehow,’’ said Chris Healy, 48, of Norwich, Vt., pausing as he walked to the park with his two sons. “It just doesn’t feel good.’’

Then in the seventh inning, as if in defiance, Ortiz delivered once again, blasting a go-ahead, three-run homer. As he rounded the bases to wild cheers, it was like old times.

The seemingly scripted homerun crystallized what many fans said as they filed into Fenway for the afternoon game.

Ortiz’s reported positive drug test, while unfortunate, would not diminish their affection for the fan favorite.

“At this point, who’s surprised?’’ asked Shawn Stillman, a 31-year-old from Saugus wearing an Ortiz jersey on Lansdowne Street before the first pitch. “I’m just shrugging my shoulders. So many players were doing it, I guess you get numb after a while.’’

Across the city, from offices in the financial district to sports bars in Brighton, the report that former Sox standout Manny Ramírez and Ortiz had tested positive triggered a torrent of intense and often conflicting emotions.

Some were bitter, as though a spell had been lifted, and Ortiz’s magic no longer held sway. Others were disappointed, even crushed, but put up a brave face, saying they always suspected something was amiss. Even if they wouldn’t let themselves believe it.

“The kid in you wants you to hope it’s not true,’’ Kevin Murray, a 35-year-old from Millbury, said between bites of an Italian sausage outside the park. “Even if you knew it all along.’’

With reports yesterday that Ramírez had also tested positive for performance-enhancing substances in 2003, fans struggled to accept an achingly hard truth. The team’s two titles, won with Ortiz and Ramírez wreaking havoc in the middle of the order, now held a flaw.

As purifying as those championships felt, many were forced to realize they were not entirely pure.

“They just aren’t as golden anymore,’’ said Meghan Stipkovich, 31, heading to Fenway Park yesterday afternoon with her husband and 1-year-old daughter. “It’s disheartening. We put them on such a pedestal, and it’s tough to hear. Just very sad.’’

For Hispanic fans who have cheered the achievements of the Dominican-born Ramírez and Ortiz as if they were their own, the news hit especially hard. It would stain their legacies, and those of other Latin-born players, many said.

“It’s bad for my country,’’ said Dominican-born Carlos Melendez, 25. “We have a lot of good players who are now going to raise suspicion.’’

Melendez spoke as he got a haircut at the Fernandez Barber Shop in Jamaica Plain, where pictures of Ortiz with the shop’s barbers hung prominently on the wall and Ortiz had stopped for a haircut earlier in the day.

At Fenway, Colombian-born Oscar Casallas, a 28-year-old from Brookline, said steroid use has little stigma in many Latin American countries.

Ortiz and Ramírez, who now plays for the Los Angeles Dodgers, were among 104 players to test positive for performance- enhancing substances during supposedly anonymous 2003 testing, The New York Times reported.

Confronted with the hero’s alleged misdeeds, many fans fiercely defended Ortiz’s legacy, and the team’s two championships, as untarnished.

“He’s not the first player to take [the drugs], if it’s true, and he won’t be the last,’’ said Mary Cabral, who owns a Centre Street CD store that Ortiz is known to visit.

But at Fenway yesterday, many simply felt betrayed that Ortiz, an amiable personality whose steadfast denials of drug use struck many fans as sincere, had potentially been misleading them all along. Some took it personally.

Taking such enhancers is cheating, said Bill Bateman, a 49-year-old from Saugus who was pained by the reports. “It’s not right. What are you supposed to tell the kids who idolize the guy?’’

His friend’s son, Ian Cox, 9, said Ortiz “should have known better in the first place,’’ but like many fans, he said he would still cheer for him just as hard.

“He’s a Boston Red Sox, so I root for him,’’ Cox said definitively.

Rick Beach, who has coached youth baseball on the South Shore for about a decade, said he was shocked by the news, and disappointed that a star of Ortiz’s stature would send the wrong message to children who follow his every move in awe.

“It seems like all the big guys hitting the homeruns are taking steroids, and it’s taking away from the guys who are doing it right, giving a bad name for the sport,’’ he said. “Sometimes a kid will ask me if it’s necessary to get to the next level, and I tell them no, that they need to stick to hard work. Steroids is cheating, plain and simple, I tell them.’’

Some fans continued to maintain that Ortiz was innocent, and berated the media for dredging up old news instead of focusing on the games.

Most fans, however, were torn, their hearts and minds seemingly deadlocked.