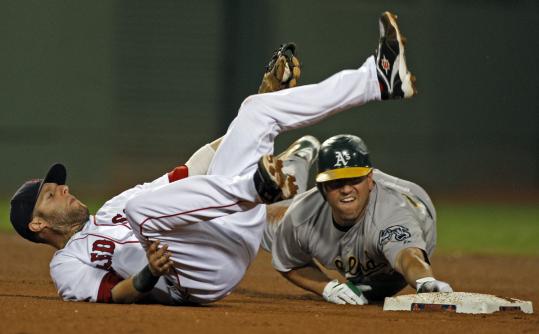 Dustin Pedroia takes a tumble but tags out Jack Cust, who was trying to stretch a single. (Jim Davis/Globe Staff)
By Amalie Benjamin Globe Staff / July 30, 2009

The communication had gone off-kilter, enough that the Red Sox appeared shocked to learn that Daisuke Matsuzaka was frustrated enough with his training regimen and throwing program that he shared those feelings with a Japanese reporter. So, when manager Terry Francona spoke to Matsuzaka yesterday, the pitcher decided to try Francona’s method of communication: English.

“It actually went pretty well,’’ Francona said. “I actually spent a good deal of time on the phone with him this morning, which I think was probably important. I let him talk a little bit, which he actually did in English, which I think was making a point of making the effort, which I thought was pretty cool. He understood how we felt and he was trying to make some points about probably being a little regretful. Again, I need to not speak for him, that’s not fair.

“The points I made to him were, this is how we felt, now where do we go from here, because ultimately that’s way more important to me or to us.’’

Francona said he told Matsuzaka “strongly how I felt,’’ but the manager clearly seemed to feel better about the situation yesterday than he did Tuesday, when fairly sharp rebukes were issued by him and pitching coach John Farrell. Francona added that the hard feelings over the incident would not be a hindrance, saying, “That would be a mistake on my part. I don’t ever think we do that.’’

Until the Red Sox head to St. Petersburg, Fla., next week for their series with the Rays, there won’t be any changes to Matsuzaka’s program. Once the team arrives there, however, the pitcher will be looked at and evaluated.

Francona said yesterday that he had thought both sides were communicating well, that they understood each other, that there was a plan in place.

“I had actually given [Matsuzaka] a written exercise one day because I wanted to understand what caused him stress, what caused him anxiety,’’ Francona said. “Some things I was aware of. Pitch counts. I know it bothered him, it ate at him. I understood that. Trips to the mound sometimes, he didn’t view it like we do. Well, I want to understand it. When John Farrell makes a trip to the mound, we’re not trying to get in the way of the game, we’re trying to help. But if it doesn’t help, we want to know why. So we’re trying to learn.

“I don’t think it’s fair for us to expect him to come to the United States, join our team, and jump on board with everything we’ve done when he hasn’t done that his whole life. Saying that, there are things we’re not willing to bend on because of health and productivity and he understands that. Don’t know that he fully agrees, which I don’t know that I would either if I grew up in a different environment with different training methods. So we’re trying to put our heads together and come up with the best of both as opposed to knocking heads. We’re still working on it.’’

Francona said the team is not trying to curtail Matsuzaka’s throwing just for the sake of it; it does so in the interests of his health.

“We do not discourage him from throwing as long as his shoulder can handle it,’’ Francona said. “He likes the touch and feel, the repetition, which I understand. He has to be able to handle that physically or it doesn’t do him any good. He’s going to regress, his shoulder’s going to become weaker, he’s going to go [to] an area where our medical people know we’re asking for trouble.

“So when it gets to [that] point we don’t let him. We’ve had to shut him down, we’ve had to cut his throwing back, we told him if he shows up and he is in shape and his shoulder’s strong, we will not get in the way of his throwing. That’s where we’re at with him and he understands that. Now it’s his responsibility to be that so he can throw.’’

In a bad way
In last night’s 8-6 loss to the A’s, Kevin Youkilis and Jason Bay, batting third and fourth for the Sox, combined for no hits, two walks, and seven strikeouts.

Although Youkilis’s slump is bad, Bay’s is epic, beginning to rival the downturn David Ortiz experienced at the start of the season. Bay is hitting .163 since June 24, as his average has dipped to .251. In that span, he has just one home run, five RBIs, and 36 strikeouts.

“Obviously, I haven’t swung the bat all that well for pretty much a month now,’’ he said. “It’s just one of those things where you go out there and you bang your head against the wall and keep going and hope you break out of it. Once again, just didn’t get it done.’’

“We all go through it,’’ Mike Lowell said. “I think just with the streak we’re going on offensively as a team, I think it’s a little bit of an exclamation point because a couple guys are going through it at the same time. Usually there’s one guy that’s scuffling and if the offense is doing its job you can kind of pick that guy up. But when you get two, three guys that aren’t swinging a great bat, it’s pretty glaring in your face.’’

The one saving grace for Bay has been his walks. With one last night, Bay has nine bases on balls in his last eight games. But he’s not hitting, and that’s really what matters.

Ortiz returns
Ortiz returned to the clubhouse yesterday, after leaving after the seventh inning Tuesday night to tend to his sick daughter. He was replaced by pinch hitter Adam LaRoche. “Just a little sick last night, but she’s OK today,’’ Ortiz said, saying it was a stomach illness for 8-year-old Alexandra . . . With the A’s throwing lefthander Brett Anderson, Ortiz and J.D. Drew did not start, though both pinch hit. Lowell was the designated hitter. He will play third base today . . . Tim Wakefield is at about 60 feet in his throwing program. Francona said it has been going slowly, as the Sox attempt to prevent Wakefield from going backward in his recovery from a sore lower back. There is no timetable for his return . . . The last time the Sox lost consecutive games at home to the A’s was July 13 and 14, 2006 . . . Jacoby Ellsbury (2 for 4) had multiple hits for the sixth time in six games on this homestand. Ellsbury is now 13 for 28 (.464) in that span. Youkilis was the last Sox batter with two or more hits in more consecutive games, nine straight from May 20-29, 2007. Jim Rice shares that record.