THIS STORY HAS BEEN FORMATTED FOR EASY PRINTING
Red Sox 8, A's 3 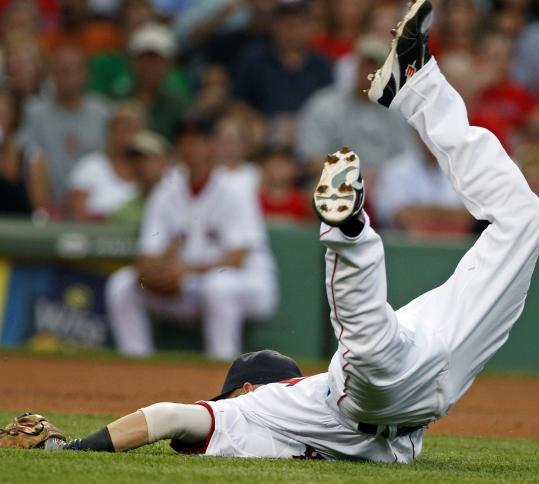 There’s no twisting this fact: Dustin Pedroia goes all out. He ends up on the turf after barehanding a ball on the run and throwing to first in the first inning. (Jim Davis/ Globe Staff)
By Amalie Benjamin Globe Staff / July 28, 2009

It all seems so familiar. A player comes to the Red Sox around the trading deadline, straight from the black hole that is Pittsburgh, and immediately endears himself to the Fenway faithful, to his teammates, to the organization. He’s a veteran, not known for making waves, and yet synchs with his new franchise as soon as he touches down in Boston.

Yes, Adam LaRoche has become the darling of Fenway Park, just as Jason Bay did a season earlier.

Easy to like, of course, when all a player does is hit. On a team with an offense that had grown stagnant, LaRoche has swept in the past three games, his first three with the Red Sox, and demonstrated why the Sox were interested in getting him, even though it might siphon playing time from Mike Lowell and Kevin Youkilis.

LaRoche proved that again last night, with two more doubles. He wasn’t alone, either, as the rest of the offense joined him in a 14-hit effort as the Sox took the first of a four-game series from the A’s, 8-3.

“When you see this, and how this atmosphere gives you like a new life almost, it just really energizes you,’’ LaRoche said. “I kind of, in some ways, feel like a rookie again with the energy of these guys, the excitement. It’s fun to come to the field.’’

Comfortable too, as LaRoche said. At least on the field. He’s still having trouble off it, though he has gradually decreased his travel time each day. He said the first day it took him 45 minutes to get to the ballpark, then 30, then 15, from his current perch in J.D. Drew’s house. There are still difficulties in his new position and new home, he just hasn’t shown it with a bat in his hands.

“It’s tough coming in a new place,’’ Dustin Pedroia said. “Just like Jason did, Adam’s swinging the bat well. He’s a great guy. He’s been great in the clubhouse. We’re happy to have him here.’’

With a two-run homer in his first game and two singles in his second, LaRoche topped himself with doubles in his first two at-bats against the A’s. Although he was stranded on second in the second inning, the double in the fourth was more effective. After Bay walked and Drew - caught in an epic July slump - singled, LaRoche drove in Bay with a double off the Wall to give the Sox a 3-0 lead. As manager Terry Francona said, “He leverages that ball to left field. That’s a very good fit.’’

A single by Jason Varitek and a sacrifice fly by Jed Lowrie added two more runs in the inning for a team desperate for offense.

LaRoche - oh, and Josh Beckett - has been good for the panicky types. In his first three games with the Sox, LaRoche has five hits, including two multiple-hit games. Of course, if he wants to match Bay’s beginning, he has a long way to go. Bay started his Sox career with a seven-game hitting streak, in which he had 12 hits, as the Sox won five of those games.

When apprised of those numbers, LaRoche said he hadn’t known they were that good. “I don’t know if I can compete with that,’’ he said.

LaRoche is on his way. He was helped by a sudden outpouring of offense - led by Pedroia’s first-inning home run and Jacoby Ellsbury’s third-inning triple - and by another excellent outing from Beckett. The latter should hardly come as a surprise from a pitcher who is 7-0 with a 2.58 ERA at home this season. The former was more of a shock, given the team’s recent performance.

But the offense backed Beckett, who held Oakland scoreless until the sixth, when he loaded the bases with two outs by walking Jack Cust. Kurt Suzuki took advantage, singling to left to score the first run for the A’s. The A’s had just two hits over the first five innings. With the bases still loaded, though, Beckett caught Ryan Sweeney for a strikeout to end the inning.

Beckett did well enough that he got not one, but two ovations. He had already gotten a cheer as he walked off the field after the seventh inning. He got another from the 37,955 in Fenway Park in the eighth, when a triple by Scott Hairston brought Francona out of the dugout to take out one dominant arm and put in another in Daniel Bard.