THIS STORY HAS BEEN FORMATTED FOR EASY PRINTING
Red Sox 3, Orioles 1

Red Sox steer out of skid 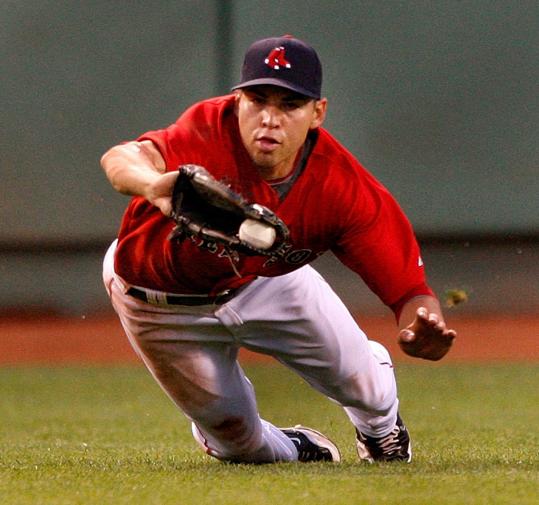 Center fielder Jacoby Ellsbury was on the ball, and his dive-and-catch robbed the Orioles’ Adam Jones of a hit to end the third inning. (Barry Chin/Globe Staff)
By Tony Massarotti Globe Staff / July 25, 2009

So this is what it has come to, even at home, even against an Orioles team all but allergic to Fenway Park. The Red Sox can give up no earned runs. They can get nine hits and play sparkling defense. And they still must hold on for dear life with the whitest of knuckles.

Possessors of a season-long, five-game losing streak upon returning home to face a club that has been their personal punching bag the last several years, the Red Sox posted a 3-1 win last night to keep pace with the victorious Yankees (again) in the American League East. The night began with the Red Sox leaving the bases loaded in the first inning. It ended with the Orioles doing the same in the ninth. And it is clear that there will be no simple fixes for a Sox club grinding its way through July, Adam LaRoche be darned.

“We did enough,’’ manager Terry Francona said following his team’s second victory since the All-Star break. “A lot of times it just comes back to pitching. If we gave up five or six runs, we’d still be talking about our hitting.’’

Or, more specifically, their lack thereof.

Instead, the Red Sox again celebrated the signing of Brad Penny, who went 6 1/3 innings before handing the ball off to a relief corps that has not allowed a run in 16 innings since the All-Star break. (More on that shortly.)

Penny allowed only an unearned run on five hits while striking out four, issuing no walks. He threw 108 pitches in his longest outing since May 20, bouncing back nicely from a rough start in Toronto last weekend, against an Orioles club that pelted him here in April.

Now 7-4 on the season, Penny has a 3.92 ERA in his last 15 outings. Overall, the Red Sox are 10-9 in his starts. Aside from a disturbing inability to hold op posing runners - the Orioles had two steals, making opponents 18 for 19 in steal attempts against him this year - Penny continues to look like the kind of No. 5 starter that most teams would love to possess.

“I think he’s - I don’t know the right word is trending - but the ball is coming out of his hand pretty crisp,’’ Francona said of his beefy righthander.

And it’s a good thing, too.

At the moment, the Red Sox are in no position to give away anything.

Nonetheless, after Penny allowed a leadoff single to Nolan Reimold in the second, the Sox got careless. With one out, during an epic 14-pitch at-bat by Melvin Mora, Reimold stole second and advanced to third on catcher Jason Varitek’s throwing error.

The steal was the Orioles’ first of the game and increased the number of stolen bases against the Sox this season to a major league-leading 95. More importantly, when Mora ended the monotony with a sacrifice fly, it left the Sox with an immediate 1-0 deficit.

Under normal circumstances, especially at home, the Sox would not bat an eye at such a development. But now? Even at Fenway, against an Orioles team that has dropped a stunning 28 of 34 games at Fenway dating to Sept. 3, 2005, any margin seems worrisome.

“I don’t think we exactly knocked the cover off the ball,’’ Francona said when asked about the approach against Orioles righthander Brad Bergesen, who held the Sox to one run in eight innings July 1. “When you’re not clicking on all cylinders, finding a way to win is [imperative].’’

So the Sox found one, scoring twice in the fourth on an RBI single by Varitek and a sacrifice fly by Jed Lowrie, then again in the fifth on a fielder’s choice by J.D. Drew. The Sox threatened again in the sixth on a two-out double by Jacoby Ellsbury and a single by Dustin Pedroia, whose efforts to give the Sox a 4-1 edge were negated when Orioles right fielder Nick Markakis gunned down Ellsbury at the plate.

The assist was Markakis’s league-leading 11th of the season - he led the majors with 17 last year - nearly as many as Celtics forward Brian Scalabrine (18) had last season.

“I knew it was going to be close,’’ Ellsbury said of the play. “Matt [Wieters] blocked the plate very well. Obviously, I never even got to the plate.’’

And so, having given away one run and having been stripped of another, the Red Sox took a 3-1 lead into the seventh with the knowledge that they were 44-2 this season when leading after six innings, even if one of those defeats was the unforgettable debacle in Baltimore June 30 during which the Sox had 10-1 advantage and made it go poof.

This time, at least until the ninth, there was not a hint of such trouble. With one out and a man on second in the seventh, Manny Delcarmen entered and retired Luke Scott (ground out) and Mora (strikeout). Hideki Okajima pitched a perfect eighth, relying exclusively on right fielder Drew - F9, F9, F9 - before Francona summoned his closer, whose previous three outings had resulted in 1-2-3 innings.

In only his second appearance since July 17, Papelbon allowed a pair of singles to open the inning, placing runners at first and third. He retired Aubrey Huff on a broken-bat pop to short before loading the bases with a walk to Reimold. And then he blew away Scott and Mora to preserve his team’s first win in a week.

“Realistically, three to four [appearances] a week is good for me,’’ Papelbon said when asked if he battled rustiness. “But we’ve been in a situation where it’s been kind of a roller coaster. I haven’t been able to get in games. I’ve got to find ways to combat that [inactivity].’’