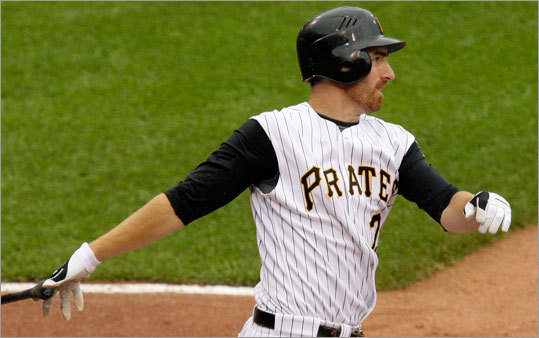 In LaRoche, 29, the Sox gained a player who provides insurance should Mike Lowell’s health deteriorate and a hitter who should boost their ability to hit righthanded pitching, one of their most glaring offensive issues.

Later in the day, the Red Sox cut any remaining ties to shortstop Julio Lugo, whom they traded to the St. Louis Cardinals for Chris Duncan, a slugging first baseman/outfielder who reported to Triple A Pawtucket. The Red Sox designated Lugo for assignment Friday, effectively ending his tenure with the club. The Sox sent cash considerations to the Cardinals to cover Lugo’s contract, and will also receive cash or a player to be named later.

“I think we plan to be very active in discussions in talking to just about every club out there and perusing every player that can make us better now and in the future,’’ Epstein said. “Certainly, there are no guarantees. Certainly, we hope to make another move between now and the deadline.’’

Epstein believes the Red Sox, even with LaRoche, do not possess the depth among their position players as they have in past seasons. A subsequent trade could be for another player who fits a similar profile.

Epstein said the Red Sox could also trade for “a second category of player we’re certainly going to pursue where we can find significant impact on the roster. Those trades are hard to make and hard to make without surrendering your entire foundation for the future. I think we’re looking at complementary moves and impactful moves.’’

(Roughly two hours after Epstein spoke, Sox owner John Henry offered this appraisal through his Twitter feed: “trading deadline hasn’t passed but don’t expect blockbuster(s). like this club; love the prospects it might take to do a blockbuster.’’)

LaRoche will join the Red Sox tomorrow in Boston, leaving his younger brother, Andy, an infielder, in Pittsburgh. He will also force the Red Sox to make a difficult roster decision. His addition means a Sox veteran will be placed on the disabled list or otherwise removed from the team; a prime candidate is Mark Kotsay, a lefthanded hitter who plays first and the outfield. Kotsay will meet with manager Terry Francona today to discuss his future.

Once LaRoche starts playing, he will make for a crowded corner infield platoon, “which is something I need to deal with,’’ Francona said. “Communicating and make it work really well. I understand what we’re trying to do here. It will be my responsibility to make it work.’’

LaRoche’s substandard statistics this season - a .247 batting average, .329 on-base percentage, and a .441 slugging percentage - might not be reason for alarm based on his career history. Before the All-Star break in his career, LaRoche has batted .252 with a .326 on-base and .447 slugging. After the break, he has hit .296 with a .357 on-base and .544 slugging. (Epstein did not consider those numbers “predicative’’ and did not base the trade on them.)

Several current Red Sox have played with LaRoche, who began his career with the Atlanta Braves. Left fielder Jason Bay and shortstop Nick Green described him as a laid-back teammate with a laconic personality, a slick glove, and a strong bat. The Sox are hitting .247 against righthanders, a problem the front office hopes LaRoche can remedy.

“I’m excited to go to a great organization in a great baseball city and jump into a pennant race,’’ LaRoche said. “I’m very thankful for the opportunity. It’s just a little tough for me right now because my little brother is here in Pittsburgh and it’s been a dream come true playing with him. So, it’s mixed emotions, a lot of sadness and a lot of excitement all at the same time. On the whole, though, I know it’s a good move for me.’’

Epstein and the Pirates had been in discussion for months, he said, and the trade was “not in the least bit a reaction’’ to the Red Sox’ recent offensive tailspin. LaRoche batted .338 at home this year and .159 on the road, which did not concern the Sox. Epstein believes playing in Fenway Park will spur LaRoche to hit balls to left-center, his best and most natural swing.

“I think he’s an ideal fit for their club, for what they’re looking for and especially that ballpark,’’ Pirates general manager Neal Huntington said. “With the wall in left field so close, he’s going to stay on the ball longer and hit a lot of balls off the Green Monster. He has the perfect lefthanded stroke for Fenway Park.’’

Neither Diaz nor Strickland were considered cornerstones of the Red Sox farm system. Diaz, 22, who was on the 40-man roster, entered spring training widely considered the best defensive player in the Red Sox system. He proved able to make flashy plays, but consistently failed to make routine plays, a problem that followed him to Double A Portland. Diaz committed 18 errors this season.

For Epstein, the duo proved easy to part with for adding LaRoche, the second player the Sox plucked from Pittsburgh in two seasons. The first, Bay, made a nearly flawless transition.

“I think he’ll take it fine,’’ Bay said. “You’ll find out when you meet him. He’s one of a kind. He’s a great guy. He’s a country boy. He takes things very slow. He goes in slow motion, almost. Nothing really fazes him.’’

Adam Kilgore can be reached at akilgore@globe.com

Newly acquired first baseman Adam LaRoche, hitting .247 on the season and just .109 since July 4, has been a stronger second-half performer during his career: