THIS STORY HAS BEEN FORMATTED FOR EASY PRINTING
Rangers 6, Red Sox 3

He gets rocked for three homers in sixth 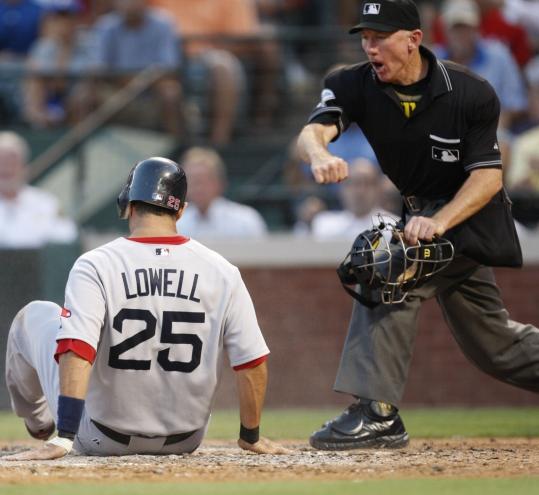 Red Sox third baseman Mike Lowell was a sitting duck after getting thrown out at home to end the fourth inning. (Ronald Martinez/Getty Images)
By Amalie Benjamin Globe Staff / July 21, 2009

ARLINGTON, Texas - Just as it appeared John Smoltz was on his way to his best outing as a member of the Red Sox, entering the sixth inning having thrown just 75 pitches and holding the Rangers to one run, everything evaporated. And quickly.

Smoke from fireworks still layered the air above the frantically waving flags in center field when Jarrod Saltalamacchia stepped to the plate in the sixth inning. The Rangers already had hit two home runs in the inning, a 424-foot blast by Michael Young to left-center to lead off and tie the score, 2-2, and a 395-foot two-run shot to right field by David Murphy that put the Rangers ahead, 5-2.

It just took one pitch to Saltalamacchia, an 89-mile-per-hour fastball the catcher smashed onto the turf beyond the center-field fence. Smoltz’s night was done, his outing washed away by three home runs and four runs in the sixth inning, leaving the Sox flailing in a 6-3 loss at the Ballpark at Arlington in front of 28,916.

The details were stark: Home run by Young, double by Josh Hamilton, strikeout of former teammate Andruw Jones, line single by Hank Blalock, strikeout of Marlon Byrd, home run by Murphy, home run by Saltalamacchia. It was the first time in 15 years, since the first inning June 19, 1994, against the Reds, that he had allowed at least three homers in the same inning, having given up four that day. It also marked the first time since June 8, 1997, he had allowed three homers in a game. That was it for Smoltz, that one pitch to Saltalamacchia, about five batters too late.

“I’m trying my best to not get frustrated over the results, but they do frustrate me because I felt like the game was well in hand,’’ said Smoltz, who dropped to 1-3 with a 6.31 ERA. “One pitch I’d like to have back, but at the end of the day I gave up six runs. Shake my head, and battle. It’s unacceptable.’’

But the pitch to Murphy, on which Smoltz slipped, was the one that haunted him. The one that left him lamenting his outing, and predicting an uneasy night.

“I hit the side of the mound and I pulled the fastball in,’’ Smoltz said. “It was supposed to go away and he golfed it. You’ve got to tip your hat to him. Certainly not the pitch I wanted to make. The two-out runs are getting a little bit on my nerves. I feel like each time that there is two outs I’m making the pitches I need to make, but today in this ballpark, and the way they hunt the fastball, I felt like I made pitches all the way up until that last spot with two outs.

“Two-run home run was the backbreaker for me.’’

The impotence of his pitches erased the lead given to him by an offense seemingly laid low since the All-Star break. Though the Sox produced early against Kevin Millwood (9-7), they also missed chances, not the course of action when the bats are whimpering. That combination extended their losing streak to three games, and left them tied with the streaking Yankees (four straight wins) for the top spot in the American League East.

So as the Sox stepped to the plate with their Opening Day lineup intact - albeit reshuffled - for only the third time this season, and the first since April 9, there was some promise this lineup might bring the offense the Sox needed. Then, Jacoby Ellsbury struck out swinging. By the third time he came up and didn’t reach base, it was clear his return to the leadoff spot was not the panacea the Sox desired.

The batters a little further down the order picked him up. Just not nearly enough.

Entering the game, David Ortiz was batting .364 against the Millwood, with three home runs and nine RBIs. Ortiz narrowly missed a homer in the first, knocking in Kevin Youkilis with a double. In the fourth, J.D. Drew walked and Mike Lowell, who came in with a .316 average, two homers, and 13 RBIs vs. Millwood, singled.

Jason Varitek, the hottest Red Sox against Millwood with a .407 average, then doubled, scoring Drew, but Lowell was easily cut down at the plate with the Sox leading, 2-0. It was the second base-running blunder of the inning. After Jason Bay singled, he was caught stealing for the first out. Lowell was the final out of the inning, though manager Terry Francona backed up third base coach DeMarlo Hale’s decision to send Lowell.

But then it was over, the Sox slipping back into their offensive doldrums. The Sox have scored first in every game on this trip. And yet, they have dropped three of four, with an inability to add runs after their early success. Some of that is because of the opposing starters, to Roy Halladay and Millwood. Some of it is pure Sox.

“We’re certainly not hitting on all cylinders,’’ Francona said. “Sometimes this game can frustrate you a little bit. We’re a couple feet from having maybe five runs. David’s ball hits the wall, and Tek’s ball doesn’t go out, and we get one. Just got to keep fighting, because sometimes it’s not as easy as you want it to be.’’

So what can they do?

“Get more hits,’’ said Bay, who was 1 for 4. “Just one of those things you go through from time to time. Not everyone’s clicking at the same time. I don’t think there’s really a magical formula for it. Success breeds confidence, but you’ve got to have the success first.

“A lot of guys are just kind of scuffling a little bit and trying to get back, and I think other guys see that and maybe want to do a little too much. We’re a better offensive team than this, no question.’’