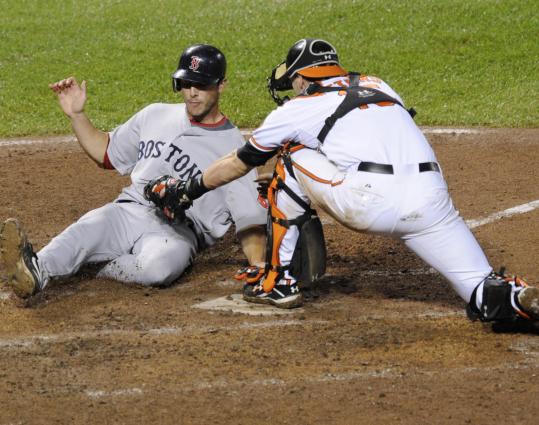 With the Sox leading, 10-6, in the eighth, Matt Wieters tagged out George Kottaras, a run that became crucial in the Sox’ collapse. (Nick Wass/Associated Press)
By Amalie Benjamin Globe Staff / July 1, 2009
Text size – +

Because the Red Sox yesterday put Mike Lowell on the DL retroactive to June 28, he will be eligible to return on the last day before the All-Star break. That likely means Lowell will return July 17, the team’s first game after the break. It will give Lowell 19 days - and 14 games - off the hip, where he has experienced tightness for the past 10 days.

He began to feel discomfort before the home series against the Braves and sat the final two games of the series. Since June 19 he has just two starts and one pinch-hitting appearance.

“It was something we had kind of talked about with Mikey, with Theo [Epstein], the medical staff, [rehabilitation coordinator] and Scott Waugh today,’’ manager Terry Francona said. “On one side, Mikey showed up today and felt great. That was the good news. Great, like to the point where he’s thinking about maybe he could play in a couple days, which we were excited about.

“At the same time, and I think Mikey agrees with this, if he plays a couple days, takes a day off, plays a couple days, and he’s not feeling as good as he wants, we kind of ruined a really good opportunity to get him back after the All-Star break playing again the majority of the time and feeling pretty good. I think as much as he doesn’t want to, I think he buys in.’’

With the All-Star break, the Sox don’t have to worry about not playing Lowell to retroactively disable him. That was why he came in as a pinch hitter Saturday and was in the on-deck circle Sunday.

Lowell has been struggling the last month, his batting average dipping to .282. In June, Lowell hit .206 with a .309 slugging percentage. He had an injection of Synvisc and 15 ccs of fluid drained from the hip Monday. He was looking forward to the injection, though he anticipated a possible stint on the DL.

Asked if the team was concerned about the tightness recurring even after the All-Star break, Francona said, “I’m sure it could occur. I can’t sit here and tell you [otherwise]. The guy had surgery. That’s why we’re doing what we’re doing. We want him to be able to play the second half. Again, he doesn’t have to play every day, but he’s an everyday player for us. I think that’s why we’re doing this. There’s nothing structurally that went wrong or cropped up . . . he was beaten on a little bit.’’

First things first
Bailey joined the Sox as a backup first baseman - although he started last night - but he hadn’t played the position in about three weeks with Pawtucket.

As for rejoining the big league club, Bailey said, “I know the drill. I don’t question it. I just do what I’m told, and that’s fine.’’ He did make sure to call his parents, who are currently in Branson, Mo., at a family reunion.

In addition to putting Bailey in the lineup, Francona considered batting him in the leadoff spot. Francona had used J.D. Drew there Monday, but Drew was out of the lineup with lefthander Rich Hill on the mound. Julio Lugo led off.

“I thought about it, actually,’’ the manager said of Bailey, who collected three hits in the 11-10 loss last night. “Some of the determining factor was we didn’t know if we were going to activate him. Me and [Brad Mills] talked about doing that. Got a guy that will swing at strikes. They’ve got a guy that he’s got good stuff, but he’s shown the ability to lose the plate a little bit. So we actually thought about it, but I don’t know if that was putting Bailes in the best situation.’’

Bailey also can serve as the emergency catcher. That takes Dustin Pedroia off the hook, though Francona said, “Although I’d love to send Pedey back there just to see what he’d look like.’’

Two for the road
Jason Varitek stood at home plate, hands on hips and confusion on his face. The rest of the Red Sox infield, led by pitcher Justin Masterson, had just walked off the field. The outfielders and Varitek stayed put.

Pedroia took the fall for it, acknowledging after the game he had started to walk off the field prematurely after Lugo threw out Felix Pie in the sixth inning. The rest followed. Until, that is, Masterson looked back. They walked out of the dugout again, as Britney Spears’s “Oops! . . . I Did It Again’’ played over the sound system. Pie’s out was only the second of the inning.

“I think Pedey was leading the charge. I looked up and saw Tek standing there all by himself. The first thing I think is I must be nuts. I’ve never seen that,’’ said Francona. “Pedey came in, and said, ‘I led the charge. I [screwed] up.’ And everybody followed him. I’m looking down at my card, like what the [heck] did I miss.

“It would have been funnier to talk about under different circumstances.’’

Historic victory
The nine-run comeback was the largest comeback win in Orioles history . . . The Orioles had lost eight straight against the Sox . . . Jonathan Papelbon’s blown save was his first against the Orioles in 21 career chances . . . The Sox bullpen allowed 10 runs over four innings. They came into the game with a best-in-baseball ERA of 2.89. It now stands at 3.24 . . . One day after stealing a home run from Kevin Youkilis, Adam Jones couldn’t bring a second one back. Youkilis lifted a shot to center field in the first that Jones grabbed with his glove, but couldn’t keep in the park, as ball and glove both ended up over the fence. Jones slammed into the wall and was taken out of the game after the second inning. “He hit the side of his face on the fence and he had some headaches,’’ Orioles manager Dave Trembley said. “A head injury, we’re basically obligated to take him out. But the doctor looked at him. They’re not taking a CT scan. He’s got a headache. We’ll see how he is [today].’’
Lowrie still sore
Jed Lowrie was again out of the lineup in Pawtucket yesterday with a fatigued quadriceps as he rehabs from his left wrist surgery . . . Nick Green was sore after hitting a ball off his ankle Monday night. That, plus the day game today, plus Lugo’s success against lefties, led to Francona’s decision to start Lugo at short. Green did pinch run for Bailey in the ninth . . . Youkilis pulled ahead of Mark Teixeira in the All-Star voting, which will be announced Sunday. He now leads by 40,047 votes. Pedroia also closed in on Texas’s Ian Kinsler, and now trails him by just 6,830 votes . . . More Pedroia horseplay from Francona: “He [screws] with [pitching coach] John Farrell a lot. But he does it, and then he looks over his shoulder. There’s been a couple times John’s actually walked over, grabbed him [by his neck], and just picked him up. It’s funny cause Pedey’s little legs are just dangling.’’