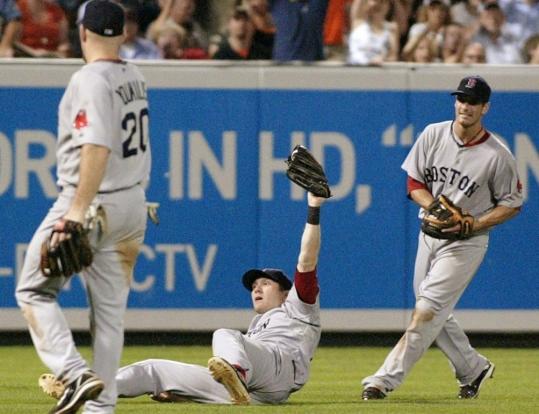 BALTIMORE - Jon Lester still can’t figure out why, exactly, he started this season as a mediocre pitcher. He threw great in spring training. His preparation never changed. He didn’t tinker with his mechanics. “I don’t know what to do different,’’ Lester said.

That, after Lester’s performance in a 4-0 Red Sox victory last night at Camden Yards, is a problem for another day. Why bother dissecting the past when you can savor the present? Lester finished up a sterling June with seven shutout innings and eight strikeouts, further extricating himself from his slow start and further validating himself as one of baseball’s best pitchers.

“I’ve always kind of been in my career a slow starter,’’ Lester said. “It took me a little bit longer this year to get going. I think it’s just going out and pitching every five days, getting that repetition. I think the biggest thing was, early on, my fastball was flat and up. I thought I was throwing good pitches when, in all actuality, I wasn’t.’’

He is now. Lester has turned his curveball from a keep-’em-honest tool to a devastating weapon that he can place with precision on either side of the plate. Of his eight strikeouts last night, six were swinging, and most of those batters flailed at breaking pitches in the dirt.

“When he was coming up and learning how to pitch, you could see him learning how to throw that breaking ball,’’ Francona said. “It’s almost an attack pitch now, not ‘Get it over for a strike.’ ’’

And it’s still probably his third nastiest choice, behind a mid-90s sinking fastball and a cutter that dives like a bird with one wing. The curve serves to make both pitches more difficult to hit.

“His strikeout pitch,’’ Orioles centerfielder Adam Jones said, “is everything.’’

On the local television broadcast, Hall of Famer Jim Palmer called Lester the best lefthanded pitcher in the American League, which would have been odd praise for most pitchers sitting on an ERA north of 4.50 with a .500 record at the night’s outset. But Lester is a different pitcher now than last month.

In five June starts, Lester compiled an ERA of less than 2.00, a stretch similar to last season. In the past two seasons during April and May, Lester is 7-8 with a 4.58 ERA. Once the calendar struck June over this season and last, Lester is 16-4 with a 2.74 ERA.

Lester chatted with pitching coach John Farrell earlier this season about the starts to his seasons. They agreed power pitches, for some reason, are a breed that takes time to warm up. Or it could be something simpler.

“Everybody forgets that he’s 25 and still developing,’’ catcher Jason Varitek said. “He may go into ruts, but it’s part of his maturity.’’

“I think he knows he’s had success against us, and whenever a pitcher has success against a team, it seems like they turn it up a little,’’ Orioles designated hitter Aubrey Huff said. “You see some video of him and it looks like he leaves some pitches over and he gets hit. Against us, we just don’t get anything to hit.’’

“I don’t know,’’ Lester said. “Maybe their lineup just fits me for some reason. I don’t know. I don’t pitch any different against them than I do any other team in the league.’’

Last night, Baltimore managed five hits, all singles, against Lester. Two of them came with two outs in the bottom of the fifth, an infield hit and a bloop single that gave the Orioles their only potential rally of the night - two on, two outs, Brian Roberts at the dish.

Farrell trudged to the mound. He wanted to give Lester a breather, because he had thrown more pitches in the fifth than any other inning. They didn’t talk strategy, because Lester already had his plan.

“With Roberts, it always changes,’’ Lester said. “It goes from one side of the plate to the other with him.’’

Lester delivered pitches to each corner, working Roberts to a 2-2 count. He tried to finish Roberts with a curve down and in, but he fouled the pitch off. Lester responded with a cutter that started outside but snapped over the outside corner. Roberts looked at strike three.

“Probably the biggest at-bat of the night,’’ Lester said.

After the pitch, Roberts barked at home plate umpire Jerry Layne. The complaints didn’t stop when the game did, either.

“He’s pitching a great game,’’ Orioles manager Dave Trembley said. “But I thought he had a plus going for him, too. The strike zone was definitely in his favor tonight. And that’s the way it was. That was established early. It was a big strike zone and he took advantage of it. I can’t wait for the day when we get that in return.’’