THIS STORY HAS BEEN FORMATTED FOR EASY PRINTING
Red Sox 6, Nationals 4 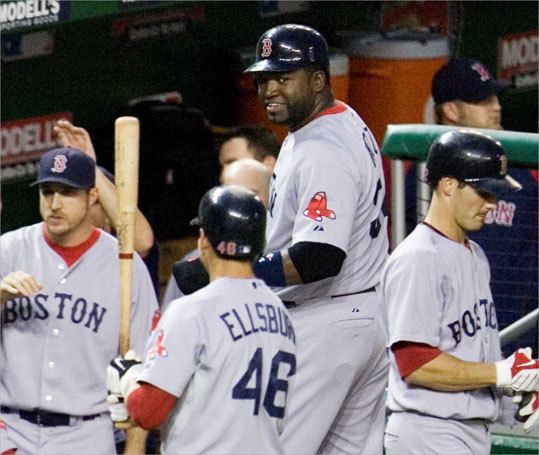 WASHINGTON - David Ortiz stood on first base, removed his batting gloves, and laughed at his fortune. He had just rolled a ball into the vacated part of the infield, a tumbleweed single few players could hope for. His mood owed to what he had done two innings earlier and for the past month.

Ortiz's gap-toothed smile, along with his potency at the plate, disappeared at the start of the season. Both have returned in full, and the latest example came last night during a 6-4 Red Sox victory before 41,530, the second Nationals Park record in as many nights. Ortiz launched his sixth home run in less than three weeks, a three-run blast that lifted the Sox to their fourth straight victory.

The first two months of the season are still a burden on Ortiz, reflected whenever he sees his batting average. It still lingers at .219 even after a string of back-to-his-old-self games. But if he continues at his current pace, he may neutralize his horrid start.

“He doesn’t feel like that hitter anymore,’’ manager Terry Francona said. “If we get David Ortiz the last three or four months, what happened the first couple months won’t matter.’’

Ortiz emerged from the visiting clubhouse and ambled toward the exit last night. He wore designer jeans and sunglasses indoors. Reporters asked for a minute. “Manana,’’ he said.

Ortiz could relax, his season in turnaround mode. The launching point came June 6, when he hooked a home run around Pesky’s Pole against the Texas Rangers. Including that game, Ortiz has six home runs in his last 42 at-bats, one every seven.

Since June 6, Ortiz is batting .357 with a .480 on-base percentage and an .833 slugging percentage. From lower in the order than he is accustomed, Ortiz is saving his season and turning back into a primary cog in the offense. Francona held off moving Ortiz back to his usual third spot - “We got a good thing going,’’ he said - but Ortiz has returned in every other way.

“Nobody in this clubhouse doubted he could do it,’’ said Jon Lester, the winning pitcher last night. “It’s just a matter of himself believing that he could.’’

The Sox took control in the fourth, when Ortiz lurched into the batter’s box with Dustin Pedroia on third and Kevin Youkilis on first. Nationals starter Craig Stammen pumped three consecutive outside fastballs, each 91-92 miles per hour, at Ortiz, who looked at one pitch for a ball and fouled two back. The count ran full. Stammen threw another pitch to the same spot, over the outside half. But he tried a changeup.

Pitchers flummoxed Ortiz the first two months of the season toggling between fastballs and offspeed pitches, but no more. Ortiz remained in his crouch, a bow pulled back, until the perfect moment. He rotated his hips and extended his arms.

The crack echoed like a thunderclap. Ortiz set down his black bat gently on its end and froze to admire what he had done. Then he started trotting around the bases as the ball landed across the center-field fence, to the left of the bleachers some 420 feet from home plate.

Think back to June 9. Ortiz crushed a 96-m.p.h. fastball off A.J. Burnett to nearly the same spot as last night’s home run, which came on an 83-m.p.h. change. Ortiz’s floundering was a function of timing. “I saw a guy,’’ hitting coach Dave Magadan said, “who was just late.’’

“When he’s not on time, he can do none of those things,’’ Magadan said. “His pitch recognition suffers. He’s got to fight to get the barrel to the ball. That’s what I saw for the first two months.’’

The home run gave Ortiz a milestone - the three RBIs gave him 1,000, 1,001, and 1,002 for his career. It also provided further evidence his decline has hit the brakes and reversed.

The Sox scored another run in the fifth, which Lester facilitated by sacrifice bunting Nick Green to second. Pedroia drove him in with a single to left. They provided an apparent knockout when catcher Jason Varitek walloped a two-run home run to right in the sixth. Stammen exited and the Sox led, 6-1.

The Sox did not enjoy another breezy final few innings like the night before. Ryan Zimmerman missed a game-tying, two-run home run by a couple feet in the seventh off Justin Masterson. One inning later, the Nationals sent the go-ahead run to the plate against Hideki Okajima. But their offense gave them enough to please the pro-Sox crowd.

The night’s highlight remained Ortiz’s mammoth home run. Those clouts once seemed routine, like Ortiz could do it any time he pleased. That feeling is starting to come back.

“I think he made a pitcher pay for a mistake,’’ Magadan said. “That’s kind of what we’re used to seeing here. Left a changeup out over the plate, and he hammered it. He didn’t roll over on it, he didn’t pop it into left. He put it where he’s put it in past years.’’