Youkilis right back in the swing 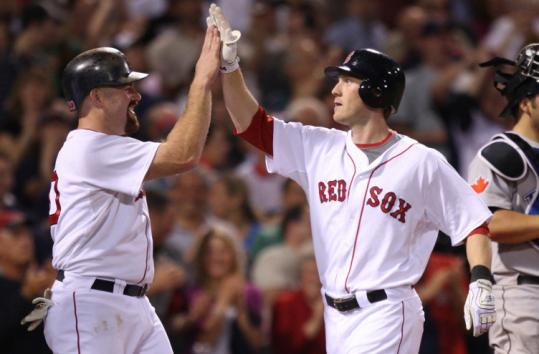 Nothing and nobody could slow Kevin Youkilis for the first 26 games of the season. Why would a 15-day stay on the disabled list be any different?

Youkilis last night returned from the strained left oblique injury that had sidelined him since May 4, and it was as if he never left. He drilled three singles in five at-bats with a run and two strikeouts. Youkilis left off with a .393 batting average, which he actually raised to a league-leading .404.

"I just went up there and tried to get my timing down," Youkilis said. "You've just got to work on your timing. Once you get back in there, your body feels good, you should be fine. The timing is going to be off just a little bit. You're just hoping to find a rhythm and get your body back in synch."

Youkilis had prepared to come off the disabled list with two rehab games at Triple A Pawtucket. He went a combined 0 for 6, which worried manager Terry Francona not a smidge. "He's a good hitter, regardless," Francona said before the game.

His lack of concern proved justified. In his first at-bat, Youkilis hammered a ball off of third baseman Scott Rolen's glove and into left field.

"It looked like he was struggling to get back in the swing of things," Francona deadpanned afterward.

The Red Sox, without question, missed Youkilis. In games Youkilis missed, the team averaged 4.8 runs. With him, including last night, they have averaged 5.7 runs. Jason Bay mentioned Tuesday night that perhaps Youkilis coming back to hit behind David Ortiz might provide a boost. And, just like that, Ortiz hit his first home run.

Youkilis lost none of his temper during his time away, either. B.J. Ryan struck out Youkilis swinging in the eighth. Youkilis already had three hits, and the Sox led by five runs on the happiest night of the year at Fenway Park. He ripped off his helmet and slammed his bat down.

"He cares about winning," Francona said. "Guys don't have to go on rehabs. A lot of guys don't want to do it. He didn't get hits there, but it's better to get that out of the way there. I think the chances are probably better than not that he'll swing the bat better for us."

To make room for Youkilis, the Red Sox optioned infielder Gil Velazquez to Pawtucket. Jeff Bailey, the first baseman who replaced Youkilis in the lineup, remained with the Sox.

Bard hit hard
Rookie reliever Daniel Bard made his Fenway debut, and the Blue Jays promptly greeted him by smacking the first two pitches of the eighth inning for hits.

Bard, a flamethrower making his third career appearance, allowed his first earned run on three hits while recording two outs. The damage began when Vernon Wells smoked the first pitch Bard threw - a 97-mile-per-hour fastball - off the Wall so hard he had to stop at first.

"I wanted to get it over for a strike and work from there," Bard said. "I approached it like any other hitter."

He took the same approach with Adam Lind, and Lind blistered a single up the middle.

"He's trying to work ahead and he left his first two fastballs over the middle of the plate," Francona said. "And they were ready for him."

Bard recorded his first out, a line out to second by Rolen. With two men on, Lyle Overbay drove a double to left-center, scoring Wells. Bard got one more out before Hideki Okajima cleaned up the inning.

"Definitely, there was some adrenaline there," Bard said. "But not any more than normal. Once I get out there, it's the same game. I was happy with how I threw the ball."

Bard has now been up for 10 days. He arrived May 10, called up one game before the Sox left for Anaheim, Calif.

"I've got a couple outings under my belt," Bard said. "I've kind of established myself as part of the team. I'm kind of settling into the clubhouse, getting into a routine, things like that."

Bay watch at 40
Bay played all 162 games during the 2005 baseball season, and the experience convinced him of one certainty: He never wants to do it again.

After last night, Bay had played all 40 games this season, the only player to appear in every game during a Red Sox season already chocked with injuries. Bay has been a constant, but at some point his streak will end.

Before the season, Dustin Pedroia expressed a desire to play 162 games this year. Bay offered him advice. "I'm not trying to toot my own horn," Bay told him. "I've done it. In hindsight, it's way overrated."

"You don't get a plaque or anything at the end of the year," Bay said yesterday before hitting his 12th home run. "You get a little handshake and a, 'Hey, nice job.' And that was it. It's cool to say, but for everything that's relevant, it's important to get a day or two [off]."

Bay has played all 40 for three reasons. He has felt fresh throughout, he's had one of the American League's hottest bats, and the Red Sox' glut of injuries has made his presence necessary. When asked if Bay would receive a day off, Francona joked, "Yeah. Next spring."

"There's certainly going to be a day," Francona said in earnest. "I don't know that he looks like he needs it right now."

Always be closing
Jonathan Papelbon blew through a perfect ninth inning Tuesday night, offering promise that his season-opening stretch of demanding outings has faded. Papelbon, 11 for 11 in save chances this season, has not allowed a run since April 27 over eight appearances. He has 12.5 strikeouts per nine innings in his last eight appearances, a span during which opponents are batting .188. The improvement owes to Papelbon's increased comfort with new mechanics, which force him to use his legs more in his delivery. He incorporated the changes this year to put less strain on his arm. "Every outing and every day, I'm adding just a little bit more confidence to my delivery and approach and my game," Papelbon said. "When you have consistency, you're going to not have to grind as hard every inning." . . . Mark Kotsay "might be able to go out Friday" for a minor league rehab stint, Francona said. The manager is unsure exactly how long Kotsay would need, but he estimated 25 at-bats. The games would not come consecutively, given the rest Kotsay needs coming off of back surgery. Pawtucket travels to Indianapolis and Louisville after a weekend home series . . . Adhering to tradition, Youkilis bought steaks from the Capital Grille for the PawSox during his rehab, which pleased Pawtucket manager Ron Johnson. "R.J. said if we get enough guys hurt, he'll weigh about 300 pounds," Francona quipped.