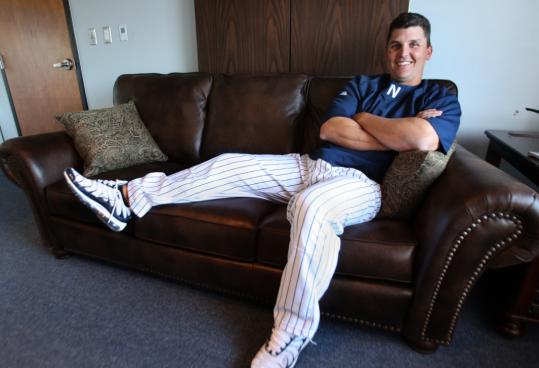 Former Red Sox closer Keith Foulke is toiling for the Newark Bears, and as you may imagine, some things about playing in the Atlantic League don't sit well with him. (Stan Grossfeld/Globe Staff Photos)
By Stan Grossfeld Globe Staff / May 20, 2009
Text size – +

NEWARK - It's spitting rain in the nearly deserted ballpark. Frank Kois of Middletown, N.J., buttons up his Yankee windbreaker and ducks under his Yankee umbrella.

The public address system blares raucous can-can music, and out in the home bullpen, a middle-age pitcher wearing a gray Newark Bears sweatshirt dances merrily along with it. It is the very same guy who was on the mound when the Red Sox ended an 86-year drought and won the World Series in 2004.

"Keith Foulke?" says Kois, fumbling through his program. "No way."

In the 2004 postseason, Foulke was more than a bear. On the mound, he was a baseball god. Foulke appeared in 11 of the Sox' 14 games and gave up just one meaningless run for an ERA of 0.64.

In the four-game World Series sweep of the St. Louis Cardinals, he was on the mound at the end of each game, winning the first and saving the last. Many observers believed that Foulke, and not Manny Ramírez, should have been named World Series MVP. Count the never-shy Foulke among them.

"Do I think I should have been MVP?" says Foulke. "Absolutely. I mean, 'cause I did everything humanly possible that I could've done."

Foulke's life has been difficult since he hoisted Jason Varitek in his arms that night in St. Louis. Red Sox Nation believed that he didn't care about the fans (see: the "Johnny from Burger King" remark) and, worse, that he hated baseball. There were knee surgeries, elbow surgery, an ugly divorce, and a year of retirement.

Interviewing Foulke is difficult. By his own description, he's "a wise-ass." He says, "I don't care," a lot. At best, he's candid. At worst, getting the truth out of him is tedious.

"Why do I always get in trouble with the fans for speaking my mind?" he asks. "Everybody laughs when I tell them I don't like baseball.

He says he's 100 percent healthy for the first time since 2003, when he won the Rolaids Relief Man Award and led the American League with 43 saves for the Oakland A's. After the World Series in 2004, he says, he could barely walk up stairs, his knees hurt that bad. Then he says not to publish that.

"I don't ever want to make excuses," he says.

He's pitching here in Newark in the independent Atlantic League because at age 36, he wants one more shot at The Show. His ERA with Newark is 0.82. He has seven saves and he's averaging more than a strikeout an inning. But he says the uniforms don't fit and the baseballs are scuffed and dirty.

"I'm not hoping to lead the Atlantic League in saves," he says. "I hope the phone rings today and it's the Diamondbacks and I can pack my stuff and get out of here."

Foulke lives in the Phoenix area but says he would play pretty much anywhere.

"Any big league city is better than being here," he says. "I'd even play for the Yankees. I still think I have something to offer."

Mixed reports
The New York skyline looms 5 miles away, beyond the outfield fence. The Bears, with 14 former major leaguers on their roster, advertise big league players at minor league prices. Carl Everett is the DH. The pitching coach is Mike Torrez.

This seems to be one of the few places on Earth undiscovered by Red Sox Nation. It's solid Yankee territory.

Foulke says his initial reception from the fans did not go well.

"Minor league hitters can't touch him," says one. "It's only a matter of time before he gets a call, but not as a closer."

But another was less optimistic.

"He's succeeding with fringe stuff," said that scout. "An 84-mile-per-hour fastball. Any mistake he makes will be hammered up there."

Foulke made more than $33 million in an 11-year career that included stops in San Francisco, Chicago, Oakland (twice), and Boston. Now he's making $3,000 a month.

Asked whether he needs the money, Foulke smiles. If worse comes to worst, he says, he can sell his game-used World Series memorabilia.

Foulke also receives $18 a day meal money - barely enough to get three squares at the nearby Burger King, he is told.

"I don't eat Burger King," he says. "What does that have to do with anything?"

In the majors, Foulke usually had it his way, with great control, a medium fastball, slider, and an extraordinary changeup. But injuries took their toll. On June 28, 2005, Foulke blew a lead, coughing up a grand slam to Cleveland's Travis Hafner in a 12-8 loss. His ERA was a hefty 6.03. Boos rained down on the World Series hero. He talked about it after the game.

"Of course I heard it. And I'm not inviting them to my World Series celebration, either," he said. "They're not going to make it any harder for me to go home and look in the mirror. I'm more embarrassed to walk into this locker room and look at the faces of my teammates than to walk out and see Johnny from Burger King booing me. I'm worried about these guys, not everybody else."

Those remarks touched off a talk-radio firestorm, but Foulke claims he was misunderstood.

"Everybody kind of locked in at the Joe Burger King thing, and not that I thought we had a chance to win the whole thing [again] that year," he says. "That's what it was all about. It had nothing to do with belittling people who go out and work a normal job.

Tough to stomach
Foulke says he loved the passion of the fans in Boston, except when he was dining.

He doesn't blame anyone but himself for his free fall in 2005, when he lost his closer job in Boston. He says that Dr. Thomas Gill, medical director for the Red Sox, examined his knees the first day of spring training and recommended immediate surgery.

"I told him, 'No, I'm not doing that,' " says Foulke. "To this day, it's one of the worst decisions I ever made, to fight through it, because it basically took the next three years of my career."

Foulke had two knee surgeries in the offseason. In 2006, the Sox hoped he would return to his form of 2004, when he saved 32 games in 39 opportunities and had an ERA of 2.17. But after a poor start by Foulke, Jonathan Papelbon was appointed the closer. Foulke eventually wound up on the disabled list with elbow tendinitis and was granted free agency.

In 2007, after passing a physical, Foulke signed a one-year, $5 million deal with the Cleveland Indians. But on Feb. 16, just one day before pitchers and catchers were due to report to spring training, he announced his retirement, citing injuries. All he had to do was cross the foul line to collect his money.

"It's not the right thing to do because they gave me an opportunity," says Foulke. "Why would I go in there knowing I wasn't going to pitch for them?"

"It was one of the most honorable things I have ever seen in 18 years," says Shapiro. "He didn't have to do it. It says a lot about his character and sense of integrity."

Foulke says he doesn't want to compare himself with Curt Schilling, who accepted $8 million from the Sox last year and never pitched an inning because of shoulder problems.

"He's got to wake up and look himself in the mirror every day," says Foulke.

Foulke pitched last year for the A's but threw just 31 innings. He hinted that they did not pitch him in September because he had an incentive-laden contract.

He says he doesn't watch "SportsCenter," read the papers, or keep in touch with his old teammates. But he lashed out at Yankee fans who claim the Sox' 2004 championship is tainted because Ramírez was found to be in violation of baseball's drug policy this year and was suspended for 50 games.

"They're pointing fingers?" he says. "Like they didn't have anybody on their rosters."

He refuses to criticize Ramírez.

"He's a good dude," says Foulke. "He was a good teammate, Manny. Is it up to me to judge him? What he does with his body is what he does. We all put on the same uniform, but we all go home to different places at night. Anyone who thinks that hasn't been part of the game for a long time, you're just fooling yourself."

When asked whether any of the 2004 Sox used steroids, Foulke frowns.

"That's a stupid question," he says. "It's not like they approached me and said, 'Hey Foulkie, we're all doing this, we want you on board.' "

A different world
Foulke doesn't go out to the bullpen until the fifth inning, spending his time in the clubhouse and dugout. Bears manager Tim Raines lets Foulke run the bullpen.

"Three or four years ago, I would've looked at you and laughed and said, 'I don't want to do that,' " he says. "But now I can see myself being a pitching coach in this league someday."

In the 11 a.m. game, the Bears are down three runs to the Lancaster (Pa.) Barnstormers but rally to tie the score in the bottom of the eighth.

There are more people on the field than in the seats. That doesn't bother Foulke.

"I knew what I was getting into when I came here," Foulke says. "I don't need 30,000 people in the stands. I don't see the fans anyway. I used to have girls sitting behind home plate flashing me. I never saw them."

Foulke pitches a scoreless ninth. The Bears rally in the ninth to beat Lancaster, 7-6.

Foulke high-fives teammates and walks off the field. It's his first win since 2006 with the Red Sox.

"Oh God, that was just the greatest thing in the world," he says.

Then he abruptly stops the sarcasm, for a second, anyway.