THIS STORY HAS BEEN FORMATTED FOR EASY PRINTING
Red Sox 16, Yankees 11 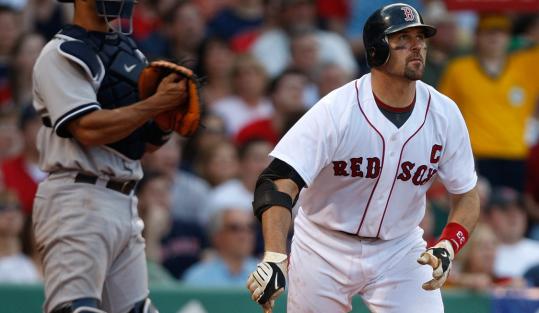 Walking Jason Bay intentionally seemed to make sense for the Yankees. He had: 1) tied Friday's game with a two-run homer with two outs in the ninth inning; 2) hit an RBI single for the Red Sox' first run yesterday in the fourth inning; and 3) slammed a two-run, go-ahead double in the fifth inning off A.J. Burnett.

Who would want to pitch to him after all that? So Jonathan Albaladejo, the Yankees' fourth pitcher, didn't.

And he still paid.

Despite looking bad on two strikeouts and a fly out to right field, and despite being tied for the major league lead with five double plays, Mike Lowell deposited yet more goodwill into the Monster seats.

His three-run home run in the seventh inning, after the Yankees had taken a 10-9 lead in the top of the inning, put the Sox up by two - which narrowed to one in the eighth on Robinson Cano's second homer of the day.

It was that kind of game.

So 4 hours, 21 minutes after it began, the Sox had pulled off what looked unbelievable when they were down 6-0 in the fourth: a 16-11 win in front of an ecstatic (and possibly exhausted) 37,699. That put the Sox, albeit with a depleted bullpen, on the verge of sweeping the Yankees tonight.

"That's an RBI right there," Bay said, lamenting briefly the intentional walk. "I'm feeling pretty good out there right now. But I got no problem scoring runs, too."

Lowell added an extra bit of flair, too, steps from Mark Teixeira at first base. About halfway down the line between home plate and first, the third baseman raised his fist in the air and waved it.

He could have kept waving that fist, as his next hit, a double to the Wall in the eighth, cleared the bases of being loaded and extended the Sox' lead to 16-11.

His six RBIs, pushing his season total to 22, were nice, although not necessarily on the upper portion of his life list.

"I'm going to have to say the birth of my kids might rank a little above that," he said.

Said Bay, "He's probably one of the best [No. 7] hitters in the game. Like he said, not exactly a trophy you want to put up in your office. But it's something that guys are getting on in front of him, and he's coming through. He's been huge."

Though Lowell's homer and double highlighted the game as the shadows deepened into darkness, there would have been nothing without Jason Varitek. His primary duty behind the plate might not have been going as planned - with Josh Beckett allowing eight runs in five-plus innings - but he made up for it in the fourth.

With one run in on Bay's one-out single to left, Lowell struck out with the bases loaded. All it took was one pitch, one 96-mile-per-hour fastball from Burnett, and the deficit was one. Grand slam into the Yankees bullpen, Varitek.

"We're down early, not doing much," manager Terry Francona said. "Tek gets the huge hit to make it a good game, and then from there it was just hang on. And it wasn't easy."

Asked how he sat through this one, a four-hour-plus game on the heels of one that lasted 4:21 Friday, Francona said, "I didn't sit a lot. I ended up pacing."

From there, from the point at which Varitek got the Sox to within one, it went like this:

"There's that many pitches thrown [387 total], and it seems like every one of them is of consequence," Francona said. "It drains you."

"Tiring," Pedroia said. "I think everyone's mentally and physically tired, but we knew that was going to happen coming in."

First pitch, at that point, seemed long ago. The starters, Beckett and Burnett, are pitching under contracts worth a combined $122.5 million, though two-thirds of that goes to the one in the Yankees' road grays. And yet, as Beckett left yesterday's game after the home run by Damon had disfigured his ERA (now at 6.00), both pitchers had allowed a stultifying eight runs apiece.

Neither had gotten more than 15 outs, leaving far too much to bullpens already overtaxed by 11 innings the night before. And so, more than two hours into the afternoon game, with night games around the country starting, it was a new game after all. And a game that would last far beyond what it seemed at the beginning, including plays odd (Pedroia's base-running gaffe and error in back-to-back innings) and exhilarating (Varitek's and Lowell's homers).

"If those guys are swinging the bats like they're capable of, it's going to be tough to keep them down," Damon said. "They've got so many weapons there. And we do too. If a team gets up 10 runs here early, it's not going to be safe. Both teams are capable of coming back. We just have to remember that. When you get up 6-0, keep trying to bury them."

The Yankees tried, but couldn't. That leaves the Sox with nine straight wins.

"It's a lot better than starting out 2-6," Pedroia said. "We started playing with a sense of urgency that last day in Oakland. We've continued to get better and better. Hopefully we can keep riding it out."