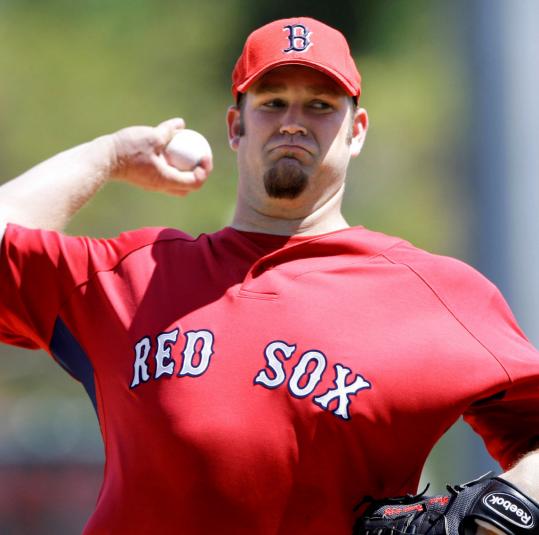 FORT MYERS, Fla. - By the time Brad Penny had finished his work yesterday and retreated to the dugout, Red Sox manager Terry Francona did not know the speed of Penny's fastball. He didn't need to.

"The hitters will let you know," Francona said.

Penny faced 10 of them in his first start against a major league team this spring, and dominated nearly every one. He allowed no hits and one walk, striking out three, in three rapid innings. He blazed his fastball without hesitation - reaching 93-95 miles per hour - the fatigue that originally bumped Penny off schedule having disappeared.

Whether Penny will make a start April 12 - the first time the Sox will need a fifth starter in the regular season - remains to be seen. For now, Penny's results and his reaction afterward buoyed both him and the Sox.

"He was out there grunting and letting fly," Francona said. "And that's what we're looking for. Grip it and go. I think he was excited. I think it was a good step for him. There was a lot of excitement in the dugout today because of how he threw."

Penny surprised himself with how good his shoulder felt. If anything, he was too efficient; Penny actually wanted to throw more than the 33 pitches (22 strikes) he fired.

Penny has no concern about his right shoulder ("not at all") and felt no fatigue between his last minor league start and yesterday. He pitched at 100 percent, he said, and it's been a while since he could claim that.

With the Dodgers last season, Penny went 6-9 with a 6.27 ERA, the worst season of his career and a dramatic dropoff from 2006, when he started the All-Star Game for the National League. He made the NL team again in 2007, and had made himself one of the league's elite starting pitchers.

He started on Opening Day for the Dodgers last season, but shoulder injuries derailed his season. Penny made three trips to the disabled list, and he threw only nine innings after June 14.

"Last year was a frustrating year for me," Penny said. "Mentally, I was shot, just because going out there every day and being hurt. It's hard enough to get these guys out when you're feeling great.

"To go out there and have that pain, it makes it even harder. It's nice to go out there with some confidence and some life on my fastball."

Penny featured his fastball because Tigers hitters were so aggressive and rarely let him get deep in counts, when he could throw offspeed pitches. He wanted to throw more breaking balls, he said, but he was pleased with his fastball.

"It felt like I had life," Penny said. "I felt like I was throwing pretty hard today. It was nice. I felt good. It has been a while since I've gone out there and felt good, you know.

"Last year, I went out, I was pitching, but I didn't really feel like I had a lot behind it. Another steppingstone. I felt pretty good."

Penny proved the efficacy of his fastball to himself when he got ahead on hitters. With an 0-and-2 count on Jeff Larish, the fourth batter he faced, Penny buzzed a chin-high fastball over the plate.

"When I'm really throwing well, that's how I pitch," Penny said. "I'll get two strikes and I'll try to elevate a fastball. Today I had that."

Penny said he and the Sox haven't discussed concrete plans for the start of the season, including whether he'll need extended spring training. He will remain on the shoulder program prescribed by team trainers.

Penny reiterated multiple times that he no longer has cause for concern about the health of the shoulder. The issue is whether he can build up enough stamina to start. Other Sox starters are now throwing roughly five innings and 75 pitches per outing, about double what Penny did yesterday.

"It just depends on how strong he gets and how lengthened out," Francona said. "I don't know that we need to put a date on it. But more important than that date is getting him built up for the long haul. That's what we're looking at, and we'll certainly talk to him about it."

For yesterday, Penny didn't seem worried about it, focusing instead on the satisfaction he had on the mound, a feeling that had become foreign.