But he is still struggling in field 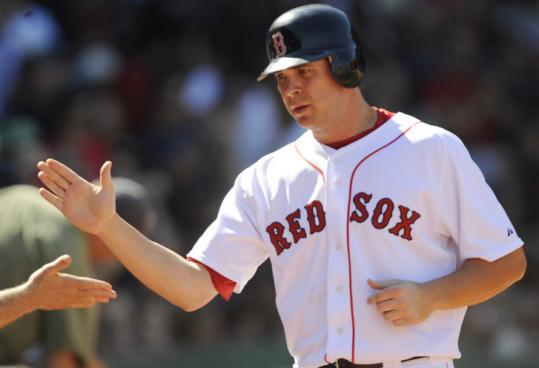 FORT MYERS, Fla. - Jeff Bailey, 30 years old and a dozen years into an unforgiving baseball career, understands exactly what he is. "I'm one of those guys you call a grinder," Bailey said earlier this week. "We all can't be superstars."

Put a bat in Bailey's hands and he's a major leaguer. Put a glove on his left hand, and his best hope is mediocrity. This places Bailey on the precipice between the majors and minors, always tilting barely on the wrong side.

Bailey was named the International League MVP last season and has been a Red Sox call-up for the past two years. There is nowhere higher he can go in the minor leagues; if a league between Triple A and the majors existed, he would play in it. He has played 1,141 professional baseball games. Thirty have been in the majors. He's fine with that.

Bailey, entering his sixth year in the Sox organization, stands closer to a regular spot in the major leagues now than at any point in his career. He is competing with Chris Carter, Brad Wilkerson, and Paul McAnulty for the final spot on the 25-man roster, vacated while Mark Kotsay recovers from back surgery.

Bailey has surprised no one with his spring, dominant at the plate and uncertain in the field. He's hitting .524 in the Grapefruit League, and his 11 hits are tied for the team lead. "He's a professional hitter," manager Terry Francona said. "He always has been."

So Bailey must prove himself a capable outfielder, a position he is still learning after years of practice. He has to carefully assess the circumstances - where base runners are, how many outs there are, where the batter is most likely to hit the ball - of each play. He takes nothing for granted, because Bailey also understands what he was going be.

"I thought I was going to be a catcher my whole career. My arm didn't agree with me."

Bailey came to the Red Sox as a catcher for Double A Portland in 2004, but he last played behind the plate in 2005. The position's fundamentals escaped him. He experienced trouble throwing to bases, and the problem quickly metastasized. His confidence crumbled. In agreement with the team's front office, Bailey gave up the position.

"He was a good catcher," said Ron Johnson, Bailey's manager with Portland and Pawtucket. "He caught a lot of games for me in Portland. He could run a game. He knows what to do back there."

Johnson has told Bailey that in an emergency, he would play Bailey behind the plate at Pawtucket. Johnson sometimes lobbies Bailey to give catching another chance, and Bailey refuses.

On Tuesday, Bailey walked out of the clubhouse as Johnson raved about his catching. "We're talking about me trying to convince you to catch," Johnson said.

The dread that accompanied throwing a baseball as a catcher still challenges him. He stays positive and developed techniques to deal with the issue. He tells himself never to think about what he's doing. Just throw. React.

"It's not a fear . . . Well, I guess it is a fear," Bailey said. "Just embarrassing yourself, like making a bad throw on an easy play. I still deal with it now."

Trying to make the Red Sox as an outfielder/first baseman, Bailey stays basic, trying to make defense as simple as possible. Catch the fly balls that should be caught. Hit the cutoff man. He works hard, but he is resigned to his flaws.

"Show them that I can be average out there," Bailey said. "That's about all I can do. I'm not going to throw anybody out. I don't have that kind of arm. I'm fine with it. I know I'll never be a phenom or anything out there."

Finding a position has always been Bailey's test. It's not that Bailey couldn't play in the majors. It's that someone else has always been able to play better. His best fit is as a designated hitter; David Ortiz blocks his way. He feels far more comfortable at first base than outfield; Kevin Youkilis plugs that opening.

The Red Sox granted Bailey free agency three times since he first signed in November 2003. Bailey could have sought another team with an easier path to the majors, but he chose to remain with the Red Sox each time.

"I'm comfortable being here," Bailey said. "If I had my choice, I would always be back here, even though there's not necessarily room in the big leagues for me. Everybody in the organization is good people. They don't hire bad people."

Bailey would prefer to spend the rest of his career with the Red Sox, but "from a financial standpoint, you got to do what you've got to do," he said. This offseason, Bailey struck a deal with a Japanese team, one more lucrative than his contract with the Red Sox. Before the Japanese contract was finalized, Bailey met with general manager Theo Epstein.

"It was pretty much a done deal," Bailey said. "Theo warned me. He said, 'The guys you're dealing with are shady people. Don't be surprised if all of a sudden this isn't on the table anymore. If it's not, you're still going to be here.' "

When the deal fell through, the Red Sox welcomed Bailey back. The team feels comfortable with him. They know he possesses a skill - hitting - that translates at any level of baseball. He has been a model teammate.

"I've always kept my mouth shut," Bailey said. "When things aren't going my way, I'm not the guy that's in the manager's office complaining about it. I understand from an organizational standpoint the kind of things they've got to do. I've lost my job at Triple A three or four times at first base. That's why I'm playing the outfield. I understand all that. I'm not going to complain about anything. If it ends up I get sent back there this year, too, that's the way it is."