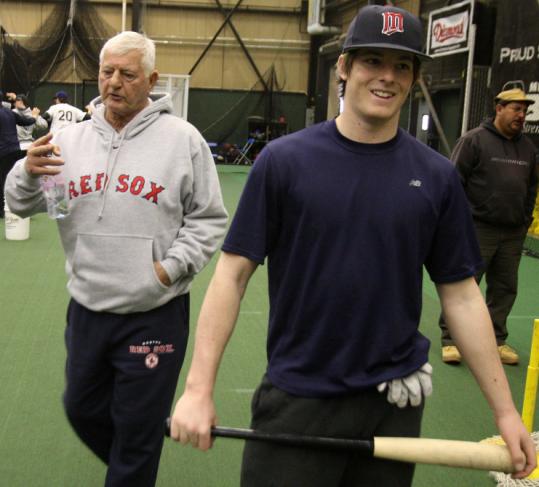 NORTH ANDOVER - When Carl Yastrzemski slips quietly through a back door of DB's Baseball and Softball Instructional Academy, the baseballs stop bouncing.

"Everything just stops when he walks in here," says Dave Bettencourt, who runs the academy.

Yaz is here on an icy December day to give batting tips to his grandson, Mike Yastrzemski, the St. John's Prep High School captain who recently received a baseball scholarship to Vanderbilt University.

The freckle-faced Yastrzemski, 18, was named to the Catholic Conference all-star team last year and led his team in runs, RBIs, doubles, and triples. In American Legion ball, he was the team leader in home runs and hit .412.

Playing in the big leagues is a long shot, but not an Impossible Dream, according to the greatest living Red Sox player.

"I went to a tournament in Lynn and I saw a kid have two or three good at-bats in a row," says Fagnant. "I didn't know who he was. I didn't know Yaz had a grandson. And I got a roster and I said, 'Whoa, Yastrzemski.' The name really perks your interest, but what I like is I identified him before I knew who he was.'

Fagnant has since worked him out twice.

"He has a good swing and good instincts and he works at it," says the scout. "He's got a pretty good hitting coach. Yaz had an ear-to-ear smile on his face when his grandson was hitting. He's got a lot of ability, but there's a lot of kids in his boat. We just have to see him play."

"He performed well in competition against some of the top players in the country, really held his own," says Hyde. "He's worked hard this offseason and he looks good. I can't say enough good things about the kid. He has as good a chance as anybody given his determination and his work ethic."

Yaz believes Mike is going to be better than his father, Michael, who played Triple A ball for the Chicago White Sox after setting a slew of school records at Florida State.

"I think so, because he's going to be bigger than his dad," says Yaz. "He's got a good swing. He only swings at strikes."

The young Yaz, who calls their sessions together "butt-kickings," says, "If I do something wrong, he'll let me know. He gets straight to the point. When I'm hitting with him, I'm way more focused."

Today, Yaz is all business. He surrounds himself in a cocoon of batting cage netting and watches his 6-foot, 175-pound grandson hit.

The young Yastrzemski is preparing to compete in the International High School Power Showcase, held earlier this month at Tropicana Field in St. Petersburg, Fla. The Hall of Famer doesn't want the line-drive hitter to change his swing.

"What did I tell you?" he says. "Fifty percent is hitting the head on the ball. The other 50 percent is the follow-through. That top hand has got to hit you in the neck."

But Yaz refuses to take any credit for his grandson's ability.

"His father taught him, " says Yastrzemski.

Papa Yaz has had a tough few years. His only son, Michael, 44, died of a heart attack Sept. 15, 2004, after undergoing hip surgery. His father, Carl Sr., died the following year. Last August, Yaz was bass fishing near Plum Island when he thought he had indigestion. When the chest pain persisted, his wife, Nancy, rushed him to Massachusetts General Hospital, where he underwent triple bypass surgery.

"It was a big scare, but I'm feeling a lot better," says the 1967 American League Most Valuable Player. "I lost 27 pounds. I do rehab three times a week. I walk every day. I'm hitting the golf club and getting ready to go fishing in Florida."

And he says he can't wait for spring training, where he is a Red Sox roving instructor. "I'll be ready," he insists.

Big-name player
The young Yastrzemski is quiet and shy. Polite and proud. Baseball is in his blood.

When he could barely stand in his crib, he was hitting a ping-pong ball with a toothbrush. When his famous grandpa took him for his first visit to the Green Monster, a dead rat in the Fenway Park wall was what he remembered most.

Mike Yastrzemski says he is neither impressed nor bothered by his famous name.

At Vanderbilt, he plans on being a communications major.

"If I don't play ball, I'd like to be an analyst for ESPN, something like that," he says.

And if he's drafted in June, will he still attend college?

"It's going to be a tough decision," Mike says. "Most likely I'll go to school. I'd play anywhere. Obviously, I'm going to get my grandfather's advice."

Yaz hopes that team will be the Red Sox.

"If the opportunity presents itself," he says.

But Yaz says recruiting is a different ballgame now. In December, the Royals sent a scout to Mike Yastrzemski's Andover home to give him eye tests and psychological tests on a laptop computer.

Yaz smiles at the thought.

"Whatever happened to, 'Can he hit? Can he field?' " he says with a laugh.

Mike was just 14 when his father died.

"It was tough, but my family made it easier for me," he says.

"He has stepped it up big-time," says young Michael's mother, Anne-marie Yastrzemski.

Not really on power trip
Yaz downplays expectations of Mike's participation in the home run derby. "He wanted to go," says Yaz. "He'll have some fun and get out of the snow."

The two-day event (Jan. 2-3) features a workout sponsored by the Yankees at their spring training complex in Tampa. Seventy high school stars from nine countries and nearly every state attend.

At the Yankee camp, the site of a jersey with "Yastrzemski" stenciled on the back brings snide comments from some of the other families gathered to watch the workouts.

In batting practice, Yastrzemski, wearing a Yankee batting helmet, sprays line drives all over the field.

The wide-eyed youngsters are given a clubhouse tour by Yankees mental conditioning coach Chris Passarella, who pops in a DVD of "Yankee Greatest Hits."

The Babe winks. Gehrig considers himself the luckiest man, Reggie hits three bombs in a row, and A-Rod says it's "the greatest franchise in the history of the world"

A clean-shaven Johnny Damon, beaming in pinstripes, describes how he "hung his head down and walked off the field" as the Red Sox were defeated by Aaron Boone's walkoff home run in the 2003 American League Championship Series.

And the piece de resistance of Yankee-Red Sox horrors: the 1978 playoff game at Fenway Park.

Mike Yastrzemski sits motionless in the classroom under a sign that reads, "Good is the enemy of greatness." His chin is propped up on his hands. He doesn't blink.

Also in the tournament is Dante Bichette, son of the former Red Sox outfielder. The elder Bichette says he sympathizes with the younger Yastrzemski.

"The name is an advantage and a disadvantage," he says. "If you handle it well, the first thing they'd ask, 'Is that Carl Yastrzemski's grandson?' and he'd get a look. But then the disadvantage would be that they'd be quicker to judge him."

Yastrzemski says his goal is to hit at least one home run. Each contestant gets 10 outs with wood bats and 15 outs with metal bats. Their day begins at 7:30 a.m.

Lefties go last, so it's early evening when Yastrzemski finally grabs his 32-inch, 29-ounce bat and digs into the batter's box.

He hits the ball far. Up, not out.

Most of young Yaz's 25 outs looked like reenactments of Papa Yaz's pop fly off Goose Gossage that Graig Nettles squeezed to give the Yankees the 1978 AL East title.

But this is where Mike Yastrzemski proves he's a champion. Other players who fared poorly grab their bat bags and slink out of the Tropicana Dome, despite the organizers' pleas to support each other. Yastrzemski stays until the bitter end.

Is that old-fashioned loyalty, a classy gesture, a love of baseball, or just plain stupidity?

"All of the above," says Yastrzemski, flashing a smile. "Excuses? I have none. You have good days and bad days. Don't let the bad days get you down."

Photos of Yaz with his grandson