Catcher considering sitting out in 2009 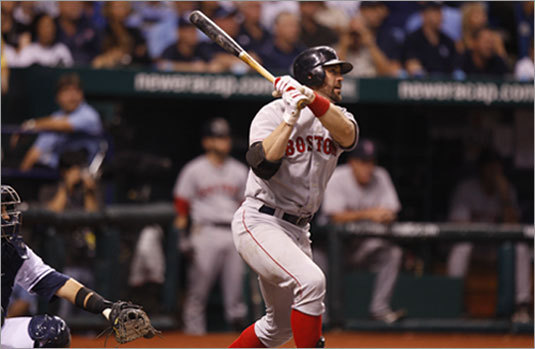 (Globe Staff / Jim Davis) Red Sox catcher Jason Varitek has until today to accept his contract offer, but sources say he may choose to skip this season. Is Boston ready to part ways with its captain?
By Tony Massarotti Globe Staff / January 30, 2009
Text size – +

With a team-mandated deadline rapidly approaching, the Red Sox and catcher Jason Varitek seem caught in a staredown that could produce an unhappy ending for both.

According to a baseball source, the deadline for Varitek to accept the Sox' latest contract offer is 8:30 this morning. (11:35 a.m. update: Still no word.) According to the source, Varitek is seriously considering sitting out the 2009 season or retiring rather than accepting the offer.

Varitek made $10 million in base salary and prorated bonus money in 2008.

Though he appears to have no other suitors, it would not be unprecedented for him to sit out until he receives an offer to his liking. With agent Scott Boras advising him, Varitek opted to return to Georgia Tech for his senior year after being drafted in the first round by the Minnesota Twins in 1993. He then reentered the draft and was selected in the first round by the Seattle Mariners in June 1994, then signed with the St. Paul Saints of the Northern League because he could not come to terms with the Mariners.

Varitek never played for the Saints and eventually signed with the Mariners in April 1995, but he lost almost a full year of development. A few years later, Boras took an almost identical approach with Sox outfielder J.D. Drew, who remains an enemy of the people in Philadelphia after stonewalling the Phillies, who drafted him in 1997, and signing with the St. Louis Cardinals in 1998.

Prior to the 2007 season, Boras threatened to send Daisuke Matsuzaka back to Japan rather than accept the Sox' six-year, $52 million contract offer. The agreement was finalized only after Matsuzaka intervened and accepted the deal.

If Varitek rejects the offer, the Sox may have little choice but to walk away, given the finality with which the offer was presented. The Sox then would likely go to spring training with a catching platoon of switch-hitting Josh Bard and lefthanded-hitting George Kottaras. Dusty Brown, a righthanded hitter, also would be in camp.

Independent of the Varitek negotiations, the Sox are expected to revisit talks with the Texas Rangers about switch-hitting Jarrod Saltalamacchia and the Arizona Diamondbacks about lefthanded-hitting Miguel Montero. Saltalamacchia is regarded as having better offensive upside but has major questions defensively. Montero is looked upon as a more balanced player and the more likely acquisition by trade, according to another baseball source.

There is the possibility Boras and Varitek are threatening to reject the offer merely as a way of leveraging the Sox into a more desirable agreement.

Though Varitek has been insistent on a multiyear deal, a source in the player's camp recently indicated other reasons for the catcher turning down the Sox' offer of arbitration in December. If Varitek accepted arbitration, many assumed he would end up with a salary in the vicinity of $10 million. However, arbitration might have resulted in a nonguaranteed contract, allowing the Sox to release Varitek during spring training for a fraction of the cost.

Last spring, the Sox released catcher Doug Mirabelli before his deal became guaranteed, paying him a fraction of the money he might have been due. The move caught many veteran players by surprise, including Varitek, who shared a close relationship with Mirabelli.

Although it has been assumed Varitek would end up with a 2009 salary near $10 million, that also might be debatable. Under terms of the bargaining agreement, teams generally can cut player salaries by a maximum of 20 percent in the arbitration process - that would place the Sox' minimum offer to Varitek at a nonguaranteed $8 million - but that stipulation does not apply to free agents such as Varitek.

It is possible the Sox entered the arbitration process by offering Varitek significantly less than $8 million, particularly following a season in which he batted .220 and a mere .187 after May 21.

Though it seems highly unlikely the Sox would release a player of Varitek's stature - unlike Mirabelli, Varitek is the captain and has been a career-long starter - it would have been within the club's rights to do so.

Although Varitek has been loyal to the Sox since arriving in Boston in July 1997, Boras has tried to lure other teams into the bidding this offseason.

A high-ranking Los Angeles Dodgers source indicated Wednesday that Boras tried to peddle Varitek to the club early in the free agent process. Later, representatives of the Dodgers and Detroit Tigers - two teams in greatest need of catching help - publicly indicated they had no interest in Varitek because they were unwilling to meet the player's salary demands and because signing him would have required the forfeiture of a high draft pick.

If Varitek and Boras are serious about holding out until the middle of the season, the player could negate the issue of compensation, thereby making him more appealing to teams in need of catching help. According to a major league baseball official, under terms of the bargaining agreement, compensation for the Sox would expire in June, meaning a signing team would be required only to meet the player's salary demands for the remainder of 2009.