He won't be an early Byrd, and he may quit 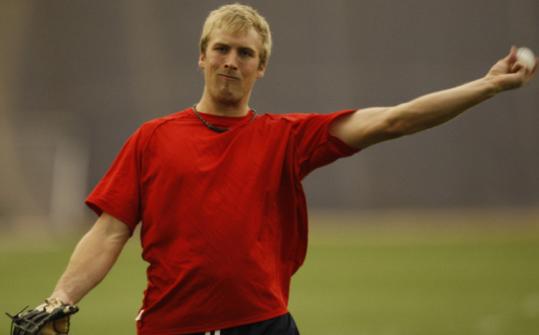 When yet another starting pitcher goes down in the middle of the season and the trade deadline has passed, there might be a solution for teams: Paul Byrd.

The starter, who spent the second half of last season with the Red Sox, isn't quite ready to put down his glove for good. But he's also not going to sign with a team before spring training, or likely before the middle of the season, preferring instead to spend more time with his family, including wife Kym and sons Grayson (12) and Colby (11).

"I can't say the word 'retirement' because there's a chance I'll come back," Byrd said by telephone yesterday. "But maybe try to transition and see what it's like on the other side."

The decision doesn't affect only Byrd. Because he's a Type B free agent who was offered salary arbitration by the Sox, the team is affected as well. The Sox will get a compensatory draft pick only if Byrd signs with another team before the draft in June. That seems unlikely.

"I feel like I've had a good career," said the 38-year-old Byrd. "There's certain things I wish I could have done, win a Cy Young, pitch in the World Series. Just playing in the big leagues was a blessing.

"I may come back and play in the second half. Baseball is passionately in my blood. I love competing. It's just real hard to be away from your family for the hours that you're away. I don't mean that as a complaint. Every job has its drawbacks."

Byrd knows he'll face a "huge void in the summer." He'll continue to train, leaving open the possibility of coming back, pairing that with potentially coaching his kids' games or maybe doing some broadcasting. He sounded conflicted over the decision last night, admitting that the thought has crossed his mind that he'll want to return and no team will want him, coupled with regret over being one game from the World Series the last two seasons, with the Indians in 2007 and Sox in 2008.

But for now, the choice is made.

Though he said he listened to a few teams this offseason, Byrd didn't seriously consider any offers. He did mention to a few general managers that he might be interested in returning during the season and received a positive response, including from a GM who, Byrd said, told him he knew the pitcher could "roll out of bed and throw strikes."

"Keep me on your list," Byrd wants to tell all the GMs out there. "If you want a short, righthanded, balding guy that throws in the low 80s, I'm your guy."

Final words
New Sox pitcher John Smoltz returned to Atlanta yesterday, and said he'll always cherish the city. "Twenty-two years is a long time and I don't think you ever take it for granted and I never will," he said. But the righthander said Braves management took him for granted this offseason, and that helped push him to accept a $5.5 million, one-year contract from the Sox as he recovers from major shoulder surgery. "They had a plan," Smoltz said of the Sox, "and the plan here [in Atlanta] was, 'We just always assumed he wouldn't leave.' " . . . The Mets are close to a $2 million, one-year free agent deal with former Sox infielder Alex Cora . . . Six Sox minor leaguers will be nonroster invitees to spring training: outfielders Josh Reddick and Zach Daeges, pitchers Daniel Bard, Kris Johnson, and Dustin Richardson, and first baseman Lars Anderson . . . The Sox had 12 players at their annual rookie development program at Boston College: Reddick, Daeges, Bard, Johnson, Richardson, Anderson, Argenis Diaz, Felix Doubront, Richie Lentz, Wes Littleton, Adam Mills, and Mark Wagner. "We want them to get a familiarity with Boston," said director of player development Mike Hazen. "We want them to get a familiarity with the people, with the city, and the people in the organization so that when they break camp with the club in spring training or it happens at some point during the season, we're eliminating some of the unknowns . . . so they can focus on playing the game, coming up and performing." . . . Littleton has been sharing his experiences with the rest of the players, as someone who has pitched in the big leagues (80 games with Texas from 2006-08). Included was the story of the first time he was called in from the bullpen to pitch in a big league game - when he couldn't find his glove . . . Ex-Bruin Cam Neely was among the speakers at the rookie development program.