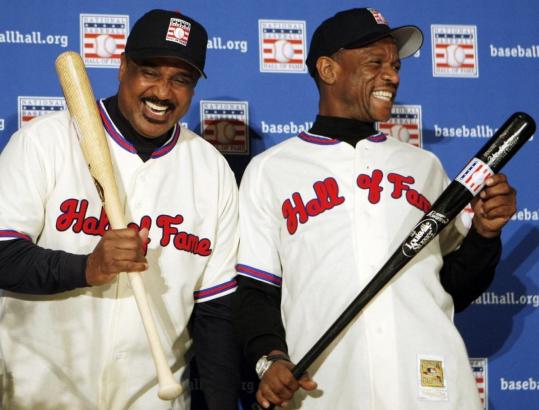 The former Red Sox slugger, who emerged as a Hall of Famer after 15 years of waiting, no doubt saw his numbers climb toward election as players who were suspected of using steroids began to diminish in the eyes of Hall of Fame voters and the public. You'll notice that Mark McGwire's numbers went down this year to 21.9 percent, as 118 voters cast ballots for him as opposed to 128 in each of the previous two years.

Is it a sign that those suspected of juicing will not be looked upon kindly in the near future?

At yesterday's day-after press conference at the Waldorf Astoria, Rice put his arm around Rickey Henderson, who also was elected Monday, and said they were "two players who have never been on steroids."

Indeed, Henderson was a gym rat, working out constantly to maintain a physique that allowed him to play 25 years in the majors. While Rice had natural brute strength, he did very little weightlifting and was able to maintain his ferocity at the plate until his body began to fail him after his 33d birthday.

One can only conclude that McGwire's 583 home runs, including seasons of 70 and 65, seemed small to voters compared with Rice's 382. Some have argued that the numbers need to be skewed, where the old 500 is now 600, but it might be looked at the other way.

How else do you explain that Andre Dawson and his 438 homers garnered 67 percent of the vote, perhaps a sign that Dawson, too, will enter the Hall of Fame someday, ahead of McGwire?

While McGwire continued his very private life since retirement, Rice and Henderson spent the day in the Big Apple, doing several one-on-one interviews before concluding things with an appearance on the David Letterman show.

The subject of steroids came up a lot. Rice kept putting it back on the writers, saying they must make the determination as to who was on them and who wasn't. Henderson, who played with McGwire, said, "I didn't even know guys took them. For me, myself, building up muscle would have slowed me down."

It's going to be up to the voters to figure out who were the juicers. What's generally assumed is that guys like Rice and Henderson were clean. It's assumed that Dawson was also clean. Ditto Bert Blyleven, Jack Morris, and Lee Smith.

We know that players named in the Mitchell Report have been tainted. There will be some writers who will never vote for any player associated with the stuff. Others will judge players on an individual basis, taking into consideration that part of the player's career may have been tainted, but perhaps not enough to disqualify him. The old "character" issue will likely be in play more than ever.

"The steroid era is a different era," said Rice. "When you talk about McGwire and others, I really can't say whether they juiced or not because I wasn't around them. Does anyone really know if McGwire was on the juice? I don't know.

"If that's helped me, it's going to help players in the future, too. I really don't know. That's really up to you guys. I'm not going to be cornered into saying that this guy or that guy was on steroids and therefore shouldn't be in the Hall of Fame.

"I know it's an issue that's going to come up in the near future when certain names come up. I guess we've already seen it, but I'm glad I'm not going to be involved in that argument."

If a player is a little short on numbers, but voters feel he's a clean player, that will likely help the player from here on out.

One interesting case coming up next year is Edgar Martinez, who for the majority of his career was a DH but who was a terrific hitter (.312 average, .418 on-base percentage) and clearly in the eyes of many of us was clean of steroids. His overall numbers (2,247 hits, 309 homers) appear short, but he had some extraordinary years.

Could he be a player who gets in because his numbers just look bigger since he's perceived as clean? How about Barry Larkin? We will now be looking at every candidate and making the character determination of whether he was clean or dirty.

It seems Rice will be the poster child for the borderline Hall of Fame candidate who keeps gaining ground because he excelled without chemical aid.

Perhaps in time, as the steroid era gets farther back in the rearview mirror and there's more of a sense of forgiveness, a guy like McGwire will begin gaining rather than receding. But that should take a few years, and you wonder if McGwire - and players such as Barry Bonds, Roger Clemens, and Rafael Palmeiro - will ever be able to overcome the taint.

For sure, Rice was a beneficiary of the steroid era. And perhaps that will be what we remember about Monday's vote.